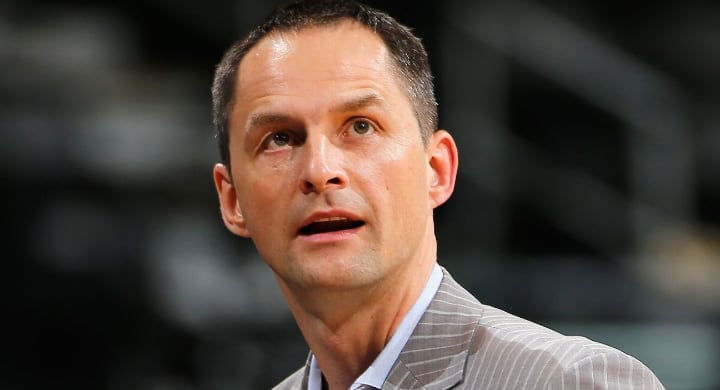 Today has been jam-packed with Bulls news, but for once, most of it is really exciting, positive stuff. Namely, the front office search is off to a roaring (and official!) start, with as many as four legitimately great candidates already on Michael Reinsdorf’s shortlist.

Learn a bit more about each one of them here:

But even as we’re very early in the process – with perhaps even more candidates to consider in the near future – there could already be someone to keep a special eye on.

Here’s the latest from Adrian Wojnarowski and Bobby Marks on the Woj pod:

“I think Arturas Karnisovas in Denver is someone to watch closely on this job. He has the GM title in Denver, he was a candidate a couple of years ago to run the Bucks, and during that search process, Denver elevated him to the GM title. Philly wanted to talk to him before the hired Elton Brand, he declined that interview … I think he interviewed in Brooklyn a couple of years ago when he was an assistant GM for the job that eventually went the Sean Marks. So I think he’s going to be someone that they take a close look at.”

This isn’t necessarily a bombshell – after all, Karnisovas was already identified as one of only four candidates on the list so far (moreover: he was one of only two candidates reported by ESPN today), so he’s sort of “someone to watch closely,” by default. But I also wouldn’t entirely dismiss the special attention he’s receiving … from Woj, nonetheless. And if anything, we can simply take that background info as a good signal that he’s a *particularly* highly sought-after executive inside the league. Perhaps the Bulls’ gig is a more attractive opportunity than you’d initially expect (more on that in a bit).

Before that, I’d like to remind you what we wrote about Karnisovas, when we first learned he was in play for the job earlier today:

A former euro player turned NBA executive, Karnisovas has been at the helm of an extremely successful rebuild in Denver. He joined the organization as an assistant GM in 2013 before eventually being handed some big boy pants in 2017. While with the team, he’s basically done exactly what the Bulls have failed to do, rebuild succesfully.

The Nuggets have seen pretty substantial growth over the past several seasons, with the team finishing 2nd in the Western Conference last season. According to the Denver Post, Karnisovas has been instrumental in the teams drafting of Nikola Jokic, Jamal Murray, and Michael Porter Jr.

Before his time with the Nuggets, he worked in the league office from 2003-2008, and then with the Houston Rockets as an international scout until making the move to Denver. I like the experience.

Like Woj and Marks said: he’s someone to watch.

Now swinging back around, I don’t want to overlook Chicago as the “right” opportunity for a lot of high-quality candidates. It’s often easy to forget how attractive the Bulls job would be for those of us living on the inside of Bulls fandom for the past, oh, decade or so, but that really shouldn’t be the case.

The Bulls are still a world-famous franchise and Chicago is a major market city, typically with the sort of attendance and related revenues that should allow them to operate without significant financial restrictions. Restoring the Bulls to their former glory is a career-defining opportunity, one that most executives would love a shot to accomplish. Needless to say, I wasn’t surprised that Marks and Woj agreed that the Bulls gig was an “elite job,” or when Woj added that Chicago is “one of the greatest cities in the world.” Both are true, and both could play a huge role in attracting the sort of front-office talent this team desperately needs.

So, all I’m saying is, don’t lose sight of that throughout this process.