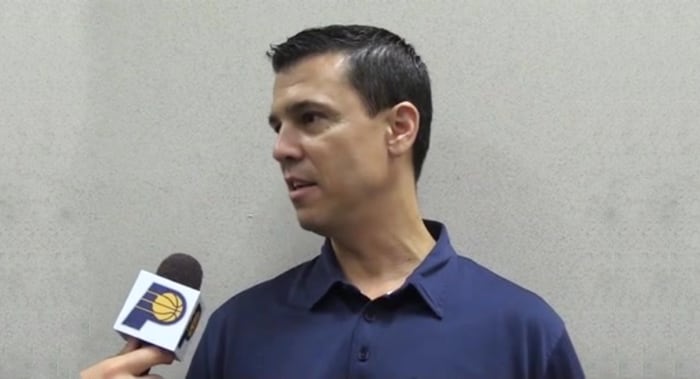 Yesterday, it was announced that the Bulls would begin the process of hiring a new top executive to take control of basketball operations with full authority. At the same time, information about Michael Reinsdorfs (first) four potential candidates came out, and on the list was Pacers General Manager Chad Buchanan.

Welp, a little over 24 hours later, it’s been reported (Sham Charania of The Athletic) that Buchanan has politely declined the Bulls request for an interview.

Sources: Pacers GM Chad Buchanan has decided to stay in Indiana and decline interview for Chicago’s top basketball operations position. Buchanan expressed appreciation and positivity about Bulls, but he and his family have been treated well in Indianapolis and opted to remain.

Buchanan was the first name to leak out earlier this season when the Bulls front office rumors began swirling – indeed, NBC Sports Chicago’s K.C. Johnson even said that the case for the Pacers GM was gaining momentum within the Bulls organization. So on the surface, it appears as though he may have been on the Bulls radar the longest. Now, he’s the quickest to say “thanks, but no thanks.”

I know this looks bad, trust me. Many were already worried about the Bulls ability to attract top-shelf candidates, especially if John Paxson and Gar Forman were still lurking somewhere in the organization, but I wouldn’t jump to conclusions. Not yet. In fact, it’s a bit presumptuous to assume his declination is entirely because of the Bulls’ reputation, projections, or general standing around the league.

Buchanan has only been in his position within the Pacers organization since 2017, and he’s built himself quite a nice and comfortable reputation. Players and cohorts alike have praised his services, and he seems very well-liked behind the scenes. All of that makes him an intriguing candidate, but it also means he probably likes where he is, as well as his potential future *in that organization.* We don’t know what’s going on in the Pacers front office, but I wouldn’t be surprised to hear they want him to stick around. Moreover, he’s in the first year of the Malcolm Brogdon signing and has two All-Stars in Victor Oladipo and Domantas Sabonis on the roster. The Pacers are building themselves a solid future, and Buchanan might feel like it’s his job to help keep things trending in the right direction.

Just because someone doesn’t want to uproot their entire life –  from a comfortable, successful position with additional upward mobility, no less – doesn’t mean the Bulls job is any less attractive. It just doesn’t. I still believe Chicago is an attractive destination and the Bulls an attractive gig. Period.

Moving on, Charania said the Bulls will continue to do their research, as the list of candidates still includes Raptors GM Bobby Webster, Miami’s Assistant GM Adam Simon, and Denver’s GM Arturas Karnisovas. To be honest – and I’m not just saying this now that it’s over – these three are a bit more intriguing than Buchanan anyway. Each has an incredible amount of experience and, arguably, a more proven track record (which is not to say we wouldn’t have been happy with Buchanan (we would!) or that more options isn’t better (it is!)). I just think context matters.

Interviews get turned down. Life matters. People have all sorts of reasons. It happens. The Bulls still have a very solid (and growing) list of candidates.

For more on each of them, check out our post from yesterday.