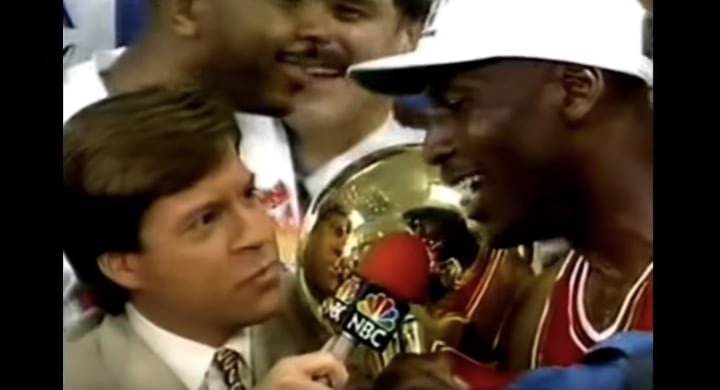 Shoutout Trent Tucker for going 4-4 on the bench with 9 points.

Charles Barkley dominated the glass this game with 17 boards.

I feel silly, but I forgot how amazing this game was.

Both teams traded punches until the knockout shot was thrown with 3.9 seconds remaining. The moment of the game is obvious – John Paxson cemented himself in Bulls history with an incredibly clutch game-winning bucket.

While I feel like I should be shocked by how wide-open he was for this make, I’m not. With a championship or Game 7 on the line, it almost felt inevitable that Michael Jordan would take the last shot. I mean, up until that point, Jordan had all of the Bulls 9 points in the quarter (the Bulls finished with a finals-low 12 points in the final frame and somehow won).

Instead, Jordan dribbled up and passed to Scottie Pippen, who broke for the basket. Scottie for the win!? Pippen then passed to Horace Grant, who was right under the basket! Okay, come one Horace! Before we knew it the ball was in the hands of a completely alone, spotted-up Paxson. FOR THE WIN!?

Paxson took one of the most beautiful, textbook 3-point shots you’ll ever see on a basketball court. A quick flick of the wrist and the Bulls were up by a single point and on the verge of their first 3-peat. My heart races even now watching the final possession, and not only because the shot is awesome, but because the stakes are even more awesome.

Grant also deserves a special shoutout. The Bulls big man not only had the key assists to Paxson in the final seconds, but he also recorded the monster block as time expired. He got his hand perfectly in front of Kevin Johnson to swat the ball away.

Everything about the final 11 seconds of this game was ballsy and heart-pounding. Great stuff.

When the final buzzer sounded that night, the Bulls became only the third team in the history of the NBA to win three consecutive championships. The first in 27 years.

While Jordan didn’t hit the game-winning shot, he averaged 41.0 points per game in the series with 8.5 rebounds and 6.3 assists. Another ring on his finger and he was further proving to be the most dominant player the league had ever seen. I mean, the GOAT said it best himself during the postgame interview with Bob Costas: “For me personally, I think it was something I was looking forward to, to separate myself from Magic and Bird, they never did it, and I did it, so that makes me feel special.”

Meanwhile … there’s Paxson. A player Bulls fans once loved has turned into one of the most hated men in franchise history. It’s weird how that can work, and it goes to show the dangers of overstaying your welcome. Deep down there is a love for what he did on the basketball court, but Bulls fans will never quite look at him the same way thanks to his front office reign.

The sooner he can dip-out of the organization and take a back seat, the sooner Bulls fans can just appreciate him for what he once accomplished.

The next (and last) NBA three-peat would only happen a couple of years later when the Los Angeles Lakers and Kobe Bryant would win from 2000-2002. The Golden State Warriors and Miami Heat would get close but fall just short. Who’s next?