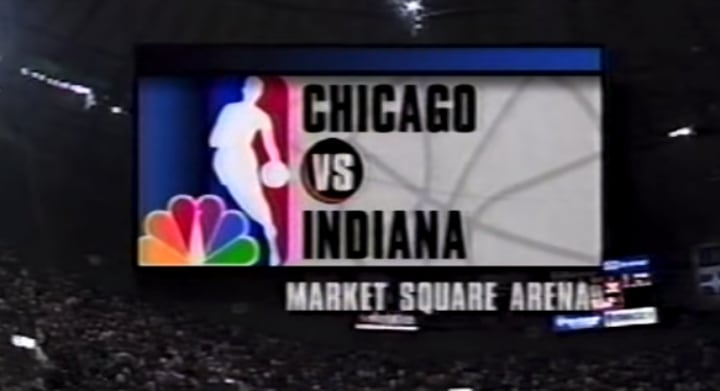 The last shooting guard to start a game for the Bulls before Jordan’s return was Pete Myers, who started 14 of the first 57 games while Jordan was doing baseball things and preparing for his ultimate return. Myers averaged 19.9 minutes, 4.9 points, 2.3 assists, 2.1 rebounds when he was in the lineup. He shot 41.3 percent from the field, 26.5 percent from the 3-point stripe, and 61.2 percent from the free-throw line. Yikes! As if there wasn’t enough excitement surrounding Jordan’s return

A pair of neat factoids about this Pacers team. One is that it featured three future NBA head coaches (Byron Scott, Sam Mitchell, Mark Jackson). Also, it featured one future league referee (Haywoode Workman). I wonder if Workman ever worked a game that was coached by a former teammate.

Bob Costas’ intro still gives me chills to this day.

Jordan put up a modest 19 points (albeit on a woeful 7-for-28 day from the field), while tacking on six rebounds, six assists, and three steals for good measure. But the major accomplishment was doing so after going 637 days between playing games of consequence in the NBA. Let that marinate for a moment.

That Jordan spent 1 year, 8 months, and 27 days away from the game and came back to perform admirably is impressive on its own.

Who knew a fax with a two-word statement would mean so much.

The Bulls lost that game in overtime. So what? I’ve never cared less about a Bulls loss to the hated Pacers in my life. Do you know why? Because the over-arching takeaway was that Michael Freaking Jordan was back. The best in the game was back in the saddle. Sure, Jordan had some kinks to work out in his game. There were new teammates to get used to in the locker room. Heck, there was a new locker room to get used to — literally. Prior to his return, Jordan had not played a regular-season game at the United Center.

It took some time for Jordan to get his feel for things again. And when he did, it was unforgettable. As were his first steps back in a Bulls uniform.