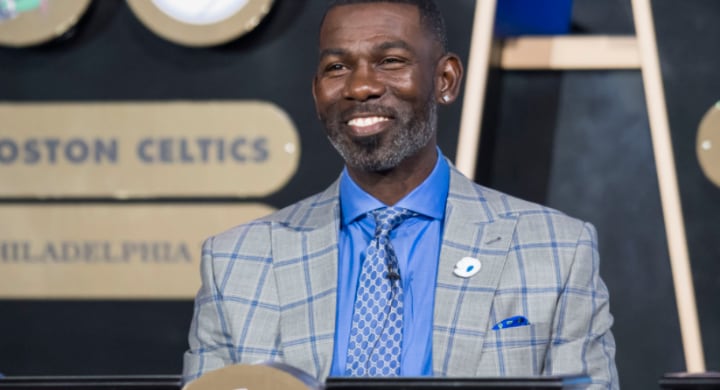 On Wednesday afternoon, Mark Cuban (owner of the Dallas Mavericks) jumped on 670 The Score to discuss his participation in the President’s Committee to Reopen America. Unfortunately, Cuban didn’t have much of substance to offer from what was apparently just a preliminary call.

At the end of that interview, however, he was asked if the Chicago Bulls had approached him/his organization about their VP of Basketball Operations Michael Finley with respect to the Bulls vacant GM gig, under Arturas Karnisovas. Laughing, Cuban vaguely (and frustratingly) seemed to recall an email to that effect, but hadn’t actually read it, as he “fell behind,” whatever that means for a billionaire owner involved in as much as Cuban. Fortunately, Cuban did say that he loves Finley and would never block him from interviewing for some other position.

And apparently, he was telling the truth:

Sources: Mavericks vice president of basketball operations Michael Finley interviewed for the Bulls' general manager job. Finley, a Chicago native who was twice an All-Star in his 15-year career, has spent the last seven seasons in the Dallas front office.

With John Paxson out of the way and Gar Forman out of the organization, the Chicago Bulls need a new GM under Arturas Karnisovas. And Finley – a Chicago Native – would be an excellent choice. I’ll let Eli dive into his candidacy with more fervor tomorrow, but in short he is a former two-time All-Star and NBA Champion (San Antonio Spurs in 2007), who’s spent seven seasons in the Mavericks front office, most notably as their VP of Basketball Operations.

In many more words … here’s his bio from their media guide:

Finley was drafted in the first round (21st overall) in the 1995 NBA Draft by the Phoenix Suns and was named to the First Team All-Rookie team following his rookie campaign. On Dec. 26, 1996, he was traded to the Mavericks along with Sam Cassell, A.C. Green and a second round pick in exchange for Jason Kidd, Tony Dumas and Loren Meyer. He played with the Mavericks from 1996-2005 and was named to the All-Star team twice (2000, 2001).

Born and raised in Maywood, Ill., Finley attended the University of Wisconsin and graduated with a Bachelor of Science in Business Management. He averaged over 20 points per game and finished his career as the all-time leading scorer in Wisconsin history. In 2009, Finley began his film production company, Follow Through Productions, LLC. He is a financier and executive producer to several films including Sanctum (2011), Luv (2012), The Day (2012), The Butler (2013), Sneakerheadz (2014), The First To Do It (2015), Franny (2015) and American Made (2017).

Finley’s passion for community service became a reality when he created the Michael Finley Foundation in 2003. Its purpose is to help support children and their families reach their fullest potential through education, entrepreneurial mentorship and other programs that emphasize improving the quality of life.

An active real estate investor and venture capitalist, he also enjoys playing golf in his spare time. He resides in Plano with his wife and three children.

Michael Finley is also black, which I bring up only because Karnisovas has previously indicated a desire to hire someone of color to fill the open GM gig. So far, the publicly known candidates include Marc Eversley (76ers), Mark Hughes (Clippers), Matt Lloyd (Magic), and now Michael Finley.