Record Numbers for "The Last Dance," Jordan and Burrell's Tricky Relationship, Defending Krause, and Other Bulls Bullets Skip to content 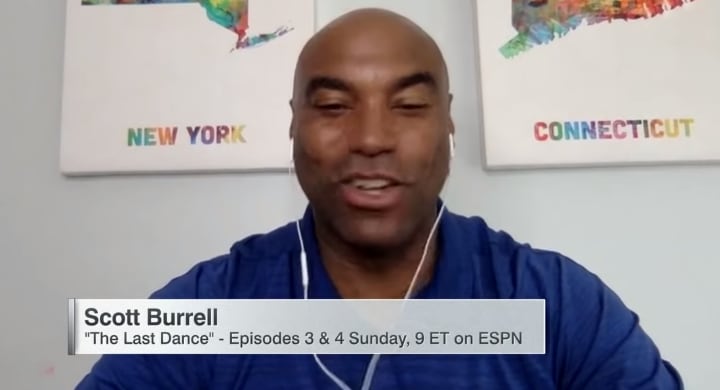 I love me some basketball, but gosh do I miss baseball. I had five Cubs games on the calendar through April, and they’re all gone. Ugh.

•  Obvious Fact of the Day: A ton of people watched The Last Dance on Sunday.

•  These numbers made the debut the most-watched ESPN documentary ever. Part of me would be curious to see how different these numbers would look without quarantine, but I have to imagine this would still easily break the previous record held by the 30 for 30 film “You Don’t Know Bo.” Michael Jordan >>> Bo Jackson.

Michael Jordan is donating his entire share of the proceeds from The Last Dance to charitable causes, per @kbadenhausen pic.twitter.com/DfWpuo5PVU

•  Moving on, we’ve received very few updates regarding what’s going on behind closed doors since Arturas Karnisovas was officially introduced last week. However, with the GM search in full effect, this shouldn’t be unexpected. Earlier this morning we learned that the first interview process is still ongoing, and a new candidate has thrown his hat into the ring. Get caught up:

•  Now back to our regularly scheduled throwback content! Former Bull Scott Burrell joined the Bulls Talk Podcast to breakdown his experience with the 1998 team. As the “new guy” on the ’98 squad, Burrell fell victim to Jordan’s wrath, and the way he was treated behind-the-scenes is a big reason Jordan felt the need to release a disclaimer of sorts before the docuseries aired (via The Athletic): “When you see the footage of it, you’re going to think that I’m a horrible guy. But you have to realize that the reason why I was treating him [Burell] like that is because I needed him to be tough in the playoffs and we’re facing the Indiana’s and Miami’s and New York’s in the Eastern Conference.”

•  (1) I’m incredibly excited to see MJ rip into this man throughout the next eight episodes. (2) Don’t be so soft, Burrell is fine. And while I’m normally not one to throw out “soft” liberally, (3) I don’t think anyone should actually get mad at MJ for anything we’re about to see on the court. We’ve known about his in-your-face competitive spirit for years, but we’ve just never seen it on camera. Not to mention, Burrell praised the ground Jordan walked-on throughout this entire interview: “I would never have thought he should be any different. I think he prepared me to be in tough times and tough situations during the game. If you can handle a practice with the Bulls, you can handle being in the Finals or Eastern Conference Finals.”

•  I also love the broader message taken away from the experience: “You’ve got to take your challenges head-on and prepare yourself and enjoy the competition of someone coming at you every day, especially when it’s the best player to ever play.” Burrell said he wants to teach his kids the same lesson – albeit in a different way (LOL … yeah). I get that Jordan’s style wouldn’t work today, and I’m sure at times some of what he said or did was unnecessary, but there is something about the whole thing that just adds to the allure.

Tim Floyd: Jerry Krause has been 'very unfairly maligned' as 'The Last Dance' tells the story of #Bulls history and the dynasty's breakup https://t.co/UnAtzso4e6 pic.twitter.com/plQyHVnSiE

•  Floyd pretty heavily defends Jerry Krause, and I don’t think we expected anything different. I honestly think this interview serves as a good reminder though – let’s not put Krause on blast too much. I certainly think it’s fair to share criticism, but we have to make this a balanced conversation. On one hand, he did help create one of the greatest franchises in sports history. Credit is due. On the other, he also let his ego get in the way and made some seriously questionable moves. We need to keep in mind that this guy can’t defend himself right now, and for that reason, we have to try to see life in both shoes. Meanwhile, Jerry Reinsdorf 100 percent can defend himself right now, and he should probably be grilled harder about why he didn’t step-up to fix some of these issues.

•  Could you imagine if the Bulls traded MJ?

The man who drafted Michael Jordan, former Bulls GM Rod Thorn just told us on Kap + Co. on @ESPN1000 he had multiple offers on draft day 1984 for Michael Jordan. "We had really strong offers for Michael from both Philadelphia + Dallas. Plus other lesser offers. Couldn't do it."

•  Is it just me or does it feel like Steve Kerr is everywhere?

Spotify/Apple links to today's Lowe Post podcast with @SteveKerr on "The Last Dance," Chicago's second three-peat, and much more — lots of great stories: