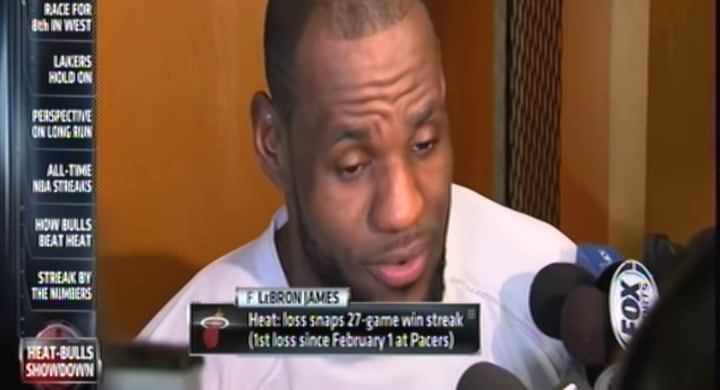 Hello, again! I don’t know if anyone has noticed, but our throwback series came to a brief halt thanks to the loads of front office news that ate up the last couple of weeks. However, with downtime back in the mix, we’re going to finish off the remaining games!

You can check out the original schedule here to see what games are left on the board. Anyway, let’s jump right back in!

Nate Robinson, of course, had an incredibly electric 14 points off the bench.

Miami was out-rebounded 43-31 in this one. Do you think that made a difference? (The answer: Duh).

For some reason, a good highlight reel of this game is hard to find online. But, fortunately, I came across Sports Center’s package, and it even includes a whining LeBron James during the postgame interview! Suck it up, dude.

While re-watching the highlights, all the feelings I experienced live rushed back into my body.

I mean, this performance had everything you’re looking for in an all-time great basketball game: Underdog storyline, home-court advantage, hard fouls, and historic implications. The Miami Heat believed they’d walk off the court with a 28-game winning streak to their name, but the Bulls (and an absolutely wild United Center crowd) said otherwise.

With no Derrick Rose, Joakim Noah, Marco Belinelli, or Richard Hamilton, the Bulls played an aggressive and captivating style of basketball to pull-off the upset victory. The game as a whole had several amazing moments, but only one will be ingrained in Bulls fans’ brains forever: Kirk Hinrich tackling LeBron James.

I remember when this happened live on my television, and I flipped the F out! With my hate for LeBron James and the Miami Heat strong, this felt like Hinrich was physically telling James:  “I don’t care who you are when you’re in my house.”

From this moment on, I was completely and utterly convinced the Bulls were going to snap Miami’s 27-game winning streak. The momentum shifted entirely to the Bulls, and even though the lead may have disappeared at times throughout the game, it never felt that way.

Hinrich rattled James early, and thus Chicago only continued to throw punches. Gibson drew a hard foul of his own later in the game. Jimmy Butler dunked right over Chris Bosh. Carlos Boozer hauled in 17 rebounds. Every single player on the team had a chip on their shoulder, and it was glorious.

Ultimately, the Bulls didn’t just want to hand the Heat a loss, they wanted it to hurt.

Everything about this game screamed Chicago basketball.

The Bulls clearly didn’t have the talent-advantage, but they had the heart. As cheesy as that sounds, it’s absolutely true. The Chicago-brand of basketball is simply playing tough, and I dare you to find a recent Bulls game that demonstrates toughness better than this.

Throughout James’ career, the Windy City has always put up a fight. Whether it be Joakim Noah giving him a hard time, Rose hitting a buzzer-beater, or snapping their historic winning streak, the Bulls have always been there to remind James of his humanity. Maybe the Bulls just want to make sure he remembers where the true GOAT played.

Anyway, the bigger takeaway here is that it’s rare for a game itself to describe a city, but that’s exactly what this one accomplished. If someone told me to describe Chicago to them, I think I could just turn on this game, sit back, and wait for them to go “oh okay, I get it.”