Zach LaVine Might Never Be a True No. 1, But the Bulls Don’t Need Him to Be Skip to content 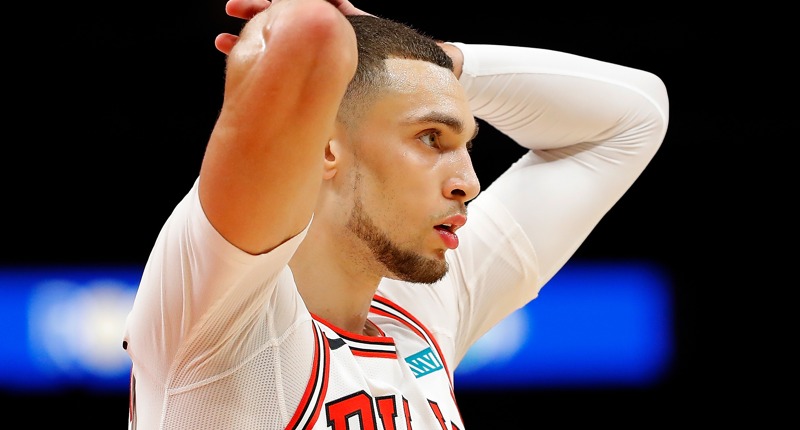 Earlier today, we discussed the latest from The Ringer’s Zach Kram breaking down the top items on the Bulls offseason checklist. In that article, Kram posed several questions facing Arturas Karnisovas and his new-look Bulls front office, including what to do with Jim Boylen, whether a Markkanen-Carter Jr. frontcourt will work, and how the Zach LaVine story will play out.

We’re going to be drilling down on that that third item more substantially right now, but I still encourage you to check out Kram’s full post at The Ringer for the rest. It’s a good one. Okay, let’s go.

I think the best way to approach this is by looking at one of his biggest flaws, so let’s start there (no, not his defense).

LaVine may have the scoring chops and highlight-reel plays to compete with the league’s best talent, but he’s failed to demonstrate one key superstar trait: Making those around him better.

Kram shares Five Thirty-Eight’s advanced player rating stat, which reveals a very concerning, albeit intuitive, reality: LaVine adds only 1.2 points per 100 possessions over a league average player. For context, Trae Young (7.1), Bradley Beal (5.4), Devin Booker (3.5), D’Angelo Russell (3.1), CJ McCollum (2.7), and DeMar DeRozan (2.5) are all players on losing teams this season that – according to this stat – play a bigger role on offense as a whole than LaVine. Ouch.

Indeed, although he might have prior experience at point guard, LaVine isn’t considered a gifted passer or playmaker (depending on your definition). This season, for example, he’s averaged only 4.2 assists per game, which falls just behind last year’s mark (4.5). Making your team better isn’t always about staking-up assists, but it’s certainly something that many of today’s No. 1 options do on a regular basis – they create.

Per Cleaning the Glass, LaVine is only in the 65th percentile when it comes to his assist-to-usage ratio (which basically estimates how pass-first a player is). His season average is a smidge above the position average, but for almost the entire middle of the year, he fell below that mark. Meanwhile, some other No. 1’s on losing teams – like Bradley Beal, Devin Booker, and DeMar DeRozan – are in the 80th percentile or higher.

Now, as we know, assists aren’t everything. Damian Lillard, James Harden, Chris Paul, Kyrie Irving, and Donovan Mitchell all have a lower AST:USAGE than LaVine. But we can also place each of them one or more tiers higher than LaVine as an overall player. Plus, most have proven they can (1) make the right play at the right time, and (2) average more assists per game than LaVine.

The broader point I’m trying to make here is that LaVine isn’t a true No. 1, even he’s fallen into that role by default with the Bulls. If he can’t even keep up in the “making your team better” categories with other No. 1 scoring guards on losing teams, how can we expect him to lead a competitive squad into the playoffs? We can’t.

Now that’s not entirely his fault. At the end of the day, an organization’s job is to put a player in the best position to succeed, and the Bulls haven’t been doing that when it comes to LaVine’s role. As much as he’s been able to carry this offense and display his skill set, he’s asked to do way too much (I mean, he’s supposed to lead a winning team even though he’s never been on one? … Kind of unfair).

So what does this mean?

Well, it sure DOESN’T mean he can’t still be considered an “elite” scoring guard in the NBA. Think about guys like Kemba Walker, Jamal Murray, and Victor Oladipo, who are key players on their team but not necessarily the lone No. 1. Sure, Walker and Oladipo have proven they can squeeze their team into the playoffs on their own, but it’s hard to currently label any of these three as bonafide No. 1’s . Walker has Tatum. Murray has Jokic. Oladipo has Sabonis and (now) Brogdon. All are either co-No. 1’s or No. 2’s.

Why can’t that be LaVine’s future? Why does he have to be the “superstar?”

And might I add, it’s not like LaVine hasn’t shown the ability to develop as a playmaker. He might not do it at the level needed of a star player, but he showed throughout this season that he can help out in that category. LaVine averaged 8.5 potential assists per game, which is better than guys like Walker, Mitchell, or Brandon Ingram.

LaVine continues to trend upward in all kinds of ways, except the win column. He needs someone else that can better facilitate on both ends of the court and just take the Bull by the horn (pun intended). If the Bulls can do this and find a more pass-happy, all-around star to join the team, LaVine’s actual fit in the NBA could become a whole lot clearer. But until this franchise can take some of this “No. 1” burden off his back, a consistent winning formula is going to be hard to find.