We Want Better Team Intros, "The Last Dance" Ep. 3, From the Perspective of Krause, and Other Bulls Bullets Skip to content 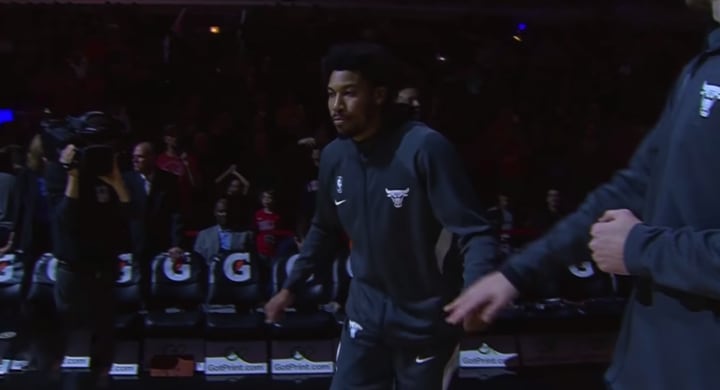 Did anyone else love watching the NFL Draft last night? I know the broadcast had its warts, but I still give major props to ABC/ESPN. Overall, they made draft night (and me!) feel as normal as possible.

• ESPN’s Zach Lowe brings up a great point in his latest column: We need the old school starting lineup introductions back. The Bulls kind of hold their own weight in this category, still using “Sirius” as their intro song and whatnot (it just tends not to feel as cool when the United Center has like 20 people in it and the Bulls are 21-42). However, I agree with Lowe, I think plenty of other teams around the league can step up their game and find something more unique. I mean, why doesn’t OKC have an intense yet awesome thunderstorm effect? Why can’t the Kings crown their players as they’re introduced? Why aren’t Nuggets players throwing chicken nuggets into the crowd when their name is called? Why the HECK isn’t there a magician sawing Orlando’s Aaron Gordon in half!? SOMEONE GET ON THIS.

• Also, I really want these old school warm-ups back in the picture. The Bulls 90s jumpsuits were always super cool, and I don’t care if it’s not today’s style. If LeBron can wear a shorts suit … these players can wear some throwback warm-ups.

• Jordan went from HATING Phil Jackson to refusing to play for another coach. Why? Phil Jackson is a dope head coach, that’s why. I hope these upcoming episodes tie him in quite a bit more. Every single player on those 90s squads loved that man, but his influence can kind of get lost in all the player drama/hype.

•  The Athletic spoke with the creator of “The Last Dance,” and he shares a lot about the two-decade-long process to get this thing made. In addition, he says it only gets better from here on out (uh, with the next episode covering Rodman’s journey with the team, I think it’s impossible for it not to get better).

• LOL: The Jump shared a great clip from last year where Pippen made Rodman aware the Bulls knew of all the crazy shenanigans he was doing behind-the-scenes. Bruh, the world knew … so, of course, the team knew.

The Last Dance is spotlighting Dennis Rodman on Sunday – here's Dennis & Scottie Pippen on #TheJump, discussing just how much Rodman's teammates knew about his – um – off-court activities. Plus, a discussion of what cameraphones would have meant for Rodman's Bulls career. pic.twitter.com/bTLXbOvIdC

• CBS Sports’ James Herbert wrote a very interesting column about the way former Bulls GM Jerry Krause is portrayed in The Last Dance. While he doesn’t necessarily stick up for him, he makes sure to point out how the problems came from all sides. Krause took a lot of punches for Jerry Reinsdorf, and it’s becoming clearer than ever how much Jordan ragged on the guy. With that in mind, Herbert reminds us, this is very much Jordan’s documentary, so Krause isn’t going to get the fairest shake: “The difference is that “The Last Dance,” like most retrospectives about that era, presents Jordan’s intensity, stubbornness and abrasive leadership style as necessary components of his greatness. Krause’s paranoia and insecurity are rarely given the same soft-focus treatment.”

• The Player’s Tribune dug through the archives to find the best Michael Jordan stories other athletes have shared, I highly recommend checking it out.

• We talked Tim Floyd earlier this week … now you get more:

Let's get to the bottom of the drama.@leilarahimi talked with Tim Floyd on the Bulls Talk Pod… and we highly recommend it. Listen on the MyTeams app: https://t.co/BPC1K8rt2Z pic.twitter.com/BU8nNdDpNI

• I never thought I’d say this, but … LISTEN TO THE TIMBERWOLVES.