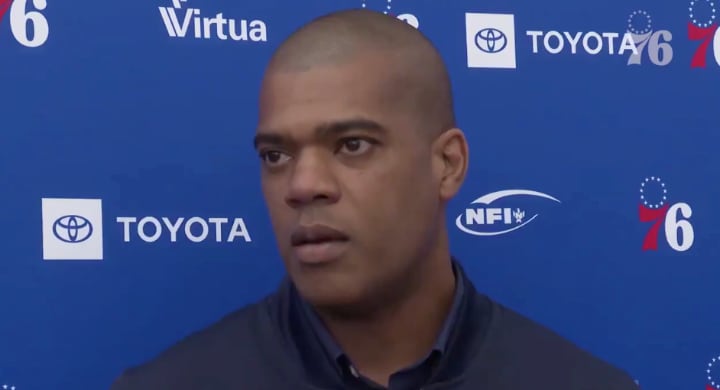 Late last night, ESPN’s Adrian Wojnarowski reported the Chicago Bulls are expected to hire 76ers senior vice president of player personnel Marc Eversley to be the organization’s next general manager. Considering almost all of Chicago had their eyes shut during this time, I’m sure we’ll get new information, and plenty of reactions, throughout the day. Let’s start by going over some of what we’ve seen so far.

•   Eversley was on the Bulls initial list of candidates that came out earlier this month. And while he may not have been the flashiest name in the conversation, his resume can hold its own against most qualified candidates. Here’s a peek:

•   Take one look at Eversley’s experience, and it’s easy to see why new VP of basketball ops Arturas Karnisovas would be interested. With strong experience in scouting and player personnel, Eversley has developed a diverse eye for talent over the years, putting DeMar DeRozan on the Raptors’ radar while in Toronto and, more recently, grabbing shooting guard/small forward Matisse Tybulle in the 2019 Draft. However, I think it’s worth noting that his talent evaluation chops fit a very similar mold to Karnisovas, who’d previously hoped to find a candidate that could complement his own skillset with different qualities, rather than supplement his own skillset with more of the same. With that said, they do differ in at least one big way – Eversley has a more hands-on player approach.

•   Diving into Eversley’s past reveals that he’s certainly been in a position to build more concrete relationships with players than most. And while I expect Karnisovas to be around plenty, Eversley feels like he can be something closer to the “face” for this front office. He’ll be the go-to executive for current players and the first conversation for free agents. The cool boss. (I think both should connect with players well enough though).

In talking to people around league about Marc Eversley, one consistent theme is his strong relationships with players. Had good rapport with DeMar DeRozan in Toronto and Joel Embiid in Philadelphia.

•   Also, before any of his NBA experience, Eversley worked as an executive with Nike. He worked his way up the ranks over 10 years and eventually took over their player relationship department. Uh, that’s a pretty big-time gig, especially in the context of the Bulls. It’s no secret that Chicago has been a pretty unattractive destination for players *and* that the front office hasn’t exactly been known for their camaraderie. In that sense, this could be a pretty heady hire by Karnisovas. Among his many duties, Eversley can also help “build the brand” and focus heavily on improving the Bulls reputation with players around the league. Anyway, The Sun-Times talks a bit more about why his life before the NBA could be where a lot of his value lies.

New Bulls GM Marc Eversley took the road less traveled to become a front-office fixture. Don't under-estimate the years with the "swoosh'' and how it will help the Bulls finally land significant free agents.

Just spoke to a source that pointed out that new Bulls GM Marc Eversley still has good relationships with the members of the Raptors from his days in Toronto … ahhh Toronto, where former Bulls assistant coach Adrian Griffin resides as an assistant #moresmoke

•   At the end of the day, “great talent evaluator” is exactly what you want to hear.

The Bulls got a great talent evaluator in Eversley. He first recognized the talent in DeMar DeRozan. He also called it Damian Lillard well ahead of everyone when he was an assistant GM in Toronto and was on Matisse Thybulle as early as his junior year.

• I think this might be a shared reaction by many, and I understand it.

I don't know much about Marc Eversley but I do not have a high opinion on what the Sixers front office has done over the last few years.

I hope those decisions is more on ownership, Brown, and Brand, and less so on Eversley.

But I'll trust Karnisovas on this.

•   However, Philly has still built a pretty darn good team over the last couple of seasons, they just haven’t taken the jump many expected with Embiid and Simmons. I just can’t put those struggles on Eversley, especially since he wasn’t in a No. 1 or No. 2 position there. I’ve also seen some concern about his ties with former 76ers president Bryan Colangelo, who he also worked alongside in Toronto. But even after Colangelo’s firing, the 76ers kept him around, and I think that speaks enough toward his true value within the organization. For now, I trust the moves Karnisovas is making.

•   Not particularly important … but I guess it’s good to know they can suit-up if need be.

#Bulls have added some height to front office. Reported new GM Marc Eversley & Arturas Karnisovas are both 6-8. Eversley is a native of Brampton, Ontario & played hoops at D2 Urbana Univ in Ohio, a school that shut down a few days ago.

•   He and Karnisovas are going to be best friends.

"It's about gathering as much information as possible."

•   More background and some old quotes from the man himself.