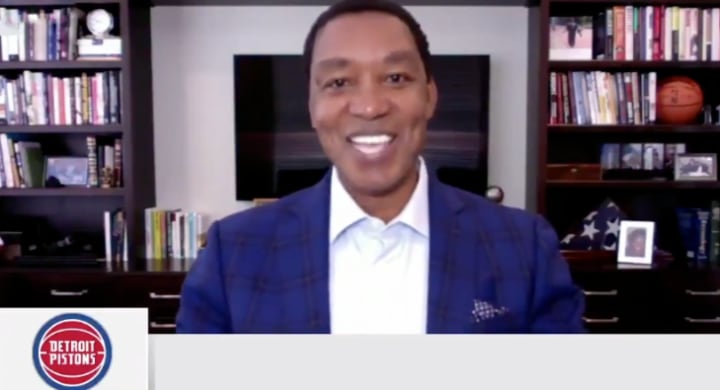 Isiah Thomas in on a defense tour.

In episodes 3 and 4 of The Last Dance on Sunday night, the Detroit Pistons weren’t exactly portrayed in the most favorable light. Of course, given their “Bad Boy Pistons” moniker, perhaps they should’ve expected as much.

Well, I guess Thomas was hoping for something a little more buddy-buddy. Over the last two days, he’s been making his rounds to explain the Pistons’ side of the story. Whether he’s talking about his team refusing to shake hands or the all-too-occasional rough foul on Michael Jordan, Thomas hasn’t exactly sounded apologetic. In fact, he still seems to be using this time to take shots at his former rival.

"You shouldn't be rewarded for lifting weights."

—Isiah Thomas on the Chicago Bulls path to a championship pic.twitter.com/5Bb18ja1Cr

Is it just me or does he sound extremely condescending?

In any case, that’s not all. Earlier today, Thomas went on the Detroit airwaves to tell the Jamie and Stoney Show about how the Bulls treated the Pistons back in the day (quote via 670 The Score):

We were the first small-market team in the NBA to really have the type of success that we had,” said Thomas, a Chicago native. “San Antonio was the second. We always had to fight the larger media markets in terms of perception and propaganda. And Phil Jackson and the Chicago Bulls at that time, they were very good at what I call the labeling theory. They did an excellent job of labeling us and giving us bad, negative descriptions. I said this on the air the other day — the racialized language that they were using around our basketball team was very insensitive. And not only did we take offense to it, but I think all of Detroit took offense to it because of the way it was being talked about.

He continues and talks about members of the Bulls calling the Pistons “thugs,” which does have the potential to carry unacceptable connotations depending on the context. But when you consider this context – a team that openly developed a strategy to hammer players when they came anywhere near the basket – it’s much harder to argue the Bulls were being “insensitive” in the way Thomas implies.

At the end of the day, I get it. I’d be pissed if someone was on national television taking shots at me and my former teammates and I didn’t have a platform to defend myself to the same audience. However, I’d also try to understand my place in history a bit more. The Pistons two titles might be overshadowed by the greatness of Jordan, but they should be. Instead of throwing punches in a fight you’re 100 percent going to lose, just humbly accept that you and your teammates play a pivotal role in one of the NBA’s greatest stories.

The fact Thomas is a Chicago-native makes this that much harder to bear. I’m sure he’s annoyed his city doesn’t share the same admiration for him, but he isn’t helping his case by turning on attack mode.

Dude, you’re arguably one of the top-50 greatest hoopers of all-time, just let us appreciate you.