Throwback Game 11: The 3OT Madness of Game 6 Skip to content 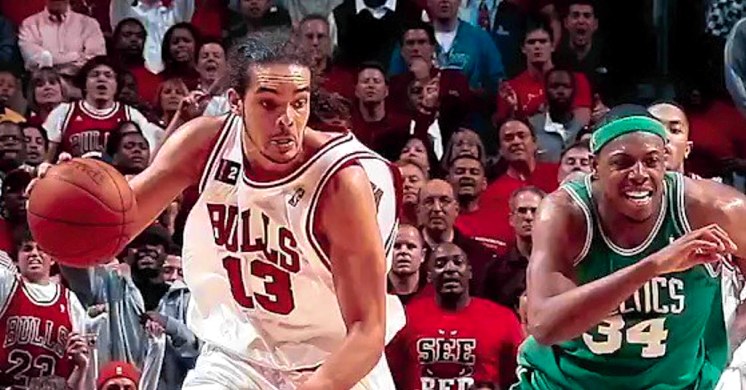 Hello, again! I don’t know if anyone has noticed, but our throwback series came to a brief halt thanks to the loads of front office news that ate up the last couple of weeks. However, with downtime back in the mix, we’re going to finish off the remaining games!

You can check out the original schedule here to see what games are left on the board. Anyway, let’s jump right back in!

Today: The 3OT Madness of Game 6

Rose, Noah, and Thomas all somehow finished with a negative plus-minus.

Let’s not beat around the bush, Joakim Noah’s go-ahead dunk with 35.5 seconds remaining is one of the most exciting Chicago Bulls buckets in the last two decades.

The big man poked the ball away from Paul Pierce and broke-out into a full-on sprint towards the basket. He took three long dribbles as Pierce gained on him. Before the Celtics legend could truly contest, Noah left his feet and threw down arguably the most ferocious dunk of his career. Pierce fouled out. Noah screamed. Doc Rivers sighed. The United Center went ballistic.

I may not be able to prove it, but I swear this whole thing happened in slow motion back in 2009. I mean, it was the third overtime in Game 6 of a No. 2 vs. No. 7 playoff series. The Bulls were a .500 team led by a 20-year-old Derrick Rose and 23-year-old Joakim Noah going toe-to-toe with the defending national champions. Ridiculous.

Anyway, while Noah had the best moment by a landslide, this whole game was too crazy not to share a couple of other notes:

•   We can’t forget Kirk Hinrich going right at Rajon Rondo at the end of the first quarter. After being thrown into the scorers table, Hinrich went right at Rondo with his chest puffed way out. The two were quickly separated as Hinrich hopped around looking like a boxer ready to throw a vicious upper-cut. We knew this game was about to be special.

•   Normally, I wouldn’t waste time praising the opposing team in these throwback posts, but we need to give Ray Allen a round of applause for dropping 51 points this game. The guy was unconscious.

•   Derrick Rose played 59 minutes and had 28 points with 8 rebounds and 7 assists. He also swatted Rondo’s game-winning fadeaway attempt out of the way with 8 seconds left.

•   John Salmons also played 59 minutes and dropped 35 points, shooting 59 percent from the field (13-22) and 55 percent from downtown (5-9).  In the second overtime, he hit a savage 3-pointer over Ray Allen to go up 114-113 and then came right back down the court to cross-up Pierce and drive to the rim for a smooth finish.

•   Uh, shoutout Brad Miller. I totally forgot that he kind of went off this game, and the Bulls 100 percent wouldn’t have won without him. He scored 23 points and hauled in 10 rebounds in what was practically a perfect performance (FG 8-9, 3PT 2-2, FT 5-5). Miller also finished with a game-high +26.

What It All Means

Earlier in this series, we took a look at the Bulls snapping the Heat’s 27-game win streak, and I wrote the following:

Everything about this game screamed Chicago basketball.

The Bulls clearly didn’t have the talent-advantage, but they had the heart. As cheesy as that sounds, it’s absolutely true. The Chicago-brand of basketball is simply playing tough, and I dare you to find a recent Bulls game that demonstrates toughness better than this.

That all applies to this game as well.

I honestly still can’t believe a Bulls team with this roster not only won a 3OT playoff game against the Boston Celtics in 2009 but were one game away from winning the series. Thanks to this game though, this could easily be considered one of the top-10(?) playoff series of the 21st century, which is crazy to say when you consider it was the freakin’ first round.

And while it still would be a couple of years before the Bulls would really assert themselves as a true title contender, this series acted as a coming-out party for the Rose-Noah duo.