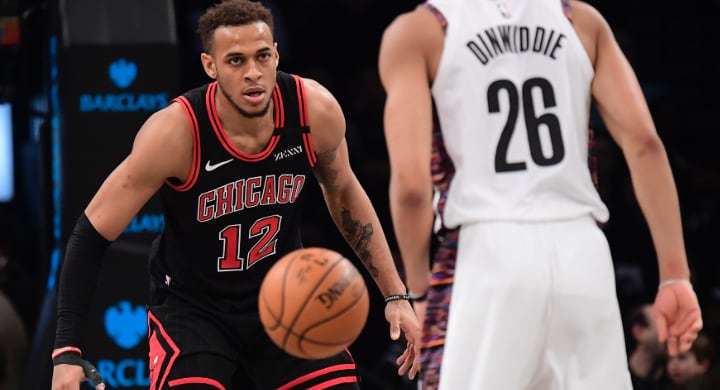 From the moment Summer League tipped-off, the rookie big man looked like an obvious pro. He played aggressive, smart, and fast, ultimately averaging 13.8 points, 7.8 rebounds, and 2.8 blocks per game while shooting 68.3 percent from the field.

Watch this to refresh your memory:

While Gafford’s success didn’t immediately translate, much could be attributed to his lack of opportunity – Gafford went from 25 minutes per game in Summer League to just 14.2 with the Bulls this season. As a raw rookie, and with Wendell Carter Jr. on the roster, the dip made perfect sense. Of course, when Gafford finally got his first real test of expanded court time, he showed everyone exactly what he can do.

Against the Milwaukee Bucks on November 18th, Gafford saw his first game with more than 5 minutes on the court. He went up against proven NBA big men like Robin Lopez, Brook Lopez, and Irsan Ilysova.

Oh, and he also blocked Giannis Antetokounmpo like it was no big deal:

Lol at Giannis thinking he can float it over Gafford pic.twitter.com/sY7vW0aI9j

In a conversation with Pig Trail Nation, Gafford discussed his first real taste of NBA action, which he apparently wasn’t stressing at all: “I was ready for it, and everybody’s seen what I did. I came out and did what I needed to do.”

He’s got that right. A 21-point performance against the best team in the NBA is one heck of a way to tip-off an NBA career. From that moment on, Gafford had earned his playing time, even as it came in waves. And while his production wasn’t exactly as impressive, he continued to show plenty of promise as a rim-rocker and protector. A combination of injuries (one of which was handled extremely poorly by head coach Jim Boylen) and inconsistent rotation decisions (also Boylen) may have limited Gafford to only 43 games this season, but if you ask me, I think he’s done enough to prove he should be taken very seriously by this new front office.

In fact, I don’t see any reason why he can’t turn into this team’s version of Taj Gibson. He has the makings of a vital off-the-bench big-man sparkplug, who can operate well in the pick and roll and offer an overall different look on the court.

If you ask Gafford though, his sights are set way higher than that, and you can’t help but love his confidence.

Gafford has this extraordinary ability to sound ultra-confident in the most chill way ever. He’s a humble and appreciative character, but also someone who isn’t afraid to puff out his chest.

How does he want people in the NBA community to view him? Well, basically just like that.

“That guy, that’s a rookie that’s not going to take no BS from nobody. Everybody’s seen an example from when we played the Pistons and me and Andre Drummond had an outing, but I’m that guy that’s not going to take anything from anybody. I’m not going to let you just push me around like I’m a little kid and stuff like that. I’m always going to come back with some type of fire, no matter what. Either I block your shot or I score on you, simple as that.”

I mean, come on, how can you not love this guy? I know his ceiling may not be as high as some of the other young players on this team, but he’s clearly prepared to work his butt off. And the best thing is, if you’re not convinced, he doesn’t care.

This guy can brush off hate easier than a basketball to the head.

Check out the full interview with Gafford here: