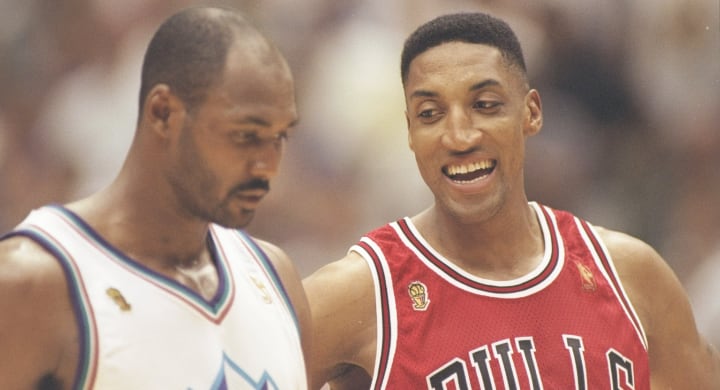 Does anyone else have that problem where they find a new song they like and then get sick of its three days later because they’ve listened to it 1000 times?

I do that at least once a week.

•   In case you ever forget, Scottie Pippen will always be there to remind you: The Mailman doesn’t deliver on Sundays. One of the all-time great trash-talking lines is made all the better with the appropriate context. ESPN’s David Fleming wrote up an oral history on the six words that possibly won the Bulls Game 1 of the 1997 NBA Final. Give it a read … or we can’t be friends (just kidding, but we’ll be better friends if you read it).

•   We all knew free throws weren’t necessarily Karl Malone’s strong suit (74 percent on his career), but during those Finals, he shot 78 percent from the line. Even better, according to ESPN, during his career he shot 77 percent from the charity stripe on Sundays, the best of any day of the week. So perhaps Malone was ahead of his time, and more of an Amazon delivery driver. Those two missed free throws at the end of Game 1 made for one of the more elite choking moments in NBA history though. As Fleming notes, he is one of only three players to miss multiple free throws with a chance to take the lead in the final minute of a finals game. Is anyone else surprised the list is that short?

•   Sure, it’s possible Malone misses those buckets regardless, but it’s hard not to think Pippen’s words played a huge role. And the oral history does a good job of demonstrating that, while the line itself was amazing, the fact it came from Pippen made it all the more impactful. The Bulls second in command wasn’t one to talk, that was MJ’s job, so when he uttered these six words, everyone was caught off guard.

•   Also, side-note, Antonie Carr’s comment about how the Bulls would send playboy models with cake to the Jazz player’s hotel rooms to get in their heads is hilarious. Do you think that would work in my fantasy league? Could this make my friends set dumb lineups? Something to consider.

•   The Bulls have a fun thing planned before the final episodes of The Last Dance air tomorrow! A number of special guests will join broadcaster Jason Benetti for conversations about the documentary and the future of the organization. Coby White, Roy Williams, Horace Grant, Toni Kukoc, Arturas Karnisovas, Marc Eversley, and more will make an appearance!

•   I don’t want to read too much into anything, but isn’t it interesting that Benetti will be hosting? With Neil Funk headed toward retirement and the Bulls in the market for a new play-by-play guy, this is an interesting development. Of course, Benetti currently does the White Sox for the Reinsdorfs, and he’s also filled in numerous times this season, so this could be nothing. However, I certainly wouldn’t mind if Benetti becomes to Bulls next right-hand man.

•   (1) Those are some interesting font choices. (2) Did Phil Jackson (or whoever typed this up) laugh to himself as he wrote that pun?

Kept my scouting report for Utah Jazz during #TheLastDance finals. THE WAY TO MAKE THE JAZZ SING THE BLUES pic.twitter.com/m5yOFKHzhw

•   Spencer Dinwiddie made quite the claim over social media a couple of days ago.

•   Wait, whoa! He’s actually doing it! If Dinwiddie can raise $24 million, fans will decide what team he signs a one-year minimum contract with. If not, it’s no big deal, a bunch of money will just get to charity!

Can’t wait to see where I play next.

•   More teams seem to be opening their facilities. Again, it’s hard to attribute this directly to any possible return, but it’s good to hear guys can get back to some kind of normalcy.

The Houston Rockets are re-opening facility for voluntary workouts on Monday, @dmorey says.

Golf courses are releasing openings for tee times a week in advance and fully booking within 5 minutes. It's like the middle-aged burbs dad version of Jordans dropping. (Cc: @nbcsnl as part of my weekend update writer application)

•   I’m not sure how signing Kyle Long would go over as this new front office’s first move … but why not!?

Kyle Long’s athletic feats used to be our department, but I think he’s ready to take his talents to the hardwood. What say you, @BN_Bulls? https://t.co/9LGpYW0b0Z