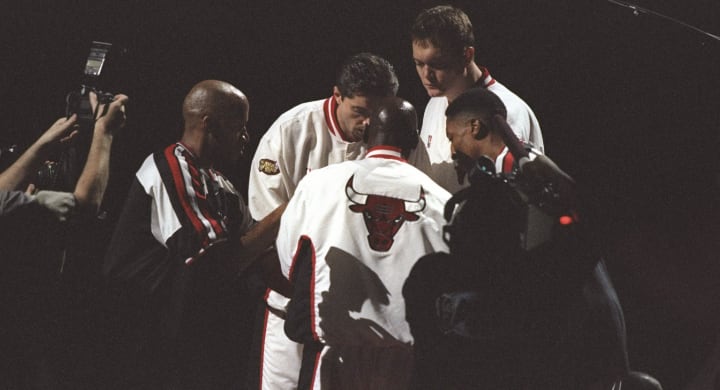 I had french toast this morning, which made me wonder whether or not it’s called that simply because it came from France.

One quick google search later, I found out the answer is basically “yes.” However, one thing I learned is that in France they refer to this dish as pain perdu, which means “lost bread.” The reason it’s called that is because back in the day people used stale bread to make this dish … which is kind of ew.

•   Whether we’re ready for it or not, tonight is the night. When the clock hits 10 p.m. CT The Last Dance will be out of our lives (yes, I know it’ll live on Netflix and what not … but just let me be dramatic, okay!?). For the last month, we’ve been helplessly locked away in a tall tower as we wait for Prince Jordan mounted on his noble goat to pay us a once-a-week visit. It’s been a welcomed distraction from the utter trash-fest that is the current world around us. And while I’m happy to hear ESPN will continue to run new documentaries over the next couple of Sundays, nothing will deliver the same comforting yet thrilling feeling The Last Dance provides.

•   Rightfully so, the docuseries will go out with a bang. ESPN is airing all of the previous 8 episodes throughout the day to make sure everyone is caught up.

Re-watch episodes 1-8 right up until 9 PM ET for the premiere of episodes 9 and 10 🍿 pic.twitter.com/b2injHUZSo

•   In addition, we’ll be getting a ton of extra content over the next couple of days, beginning with an Inside the Dance special presented by the Chicago Bulls at 3:00 p.m. CT. Commissioner Adam Silver will share some words, along with many other familiar faces. To give it a watch, head to the Bulls Youtube or Facebook page.

"It's brought back so many memories." – Commissioner Adam Silver shares his thoughts on #TheLastDance.

We take you “Inside the Dance” presented by @budweiserusa with exclusive interviews and insights at 3 pm CT.

Tune in to ⁦@NBCSChicago⁩ at 5 pm for the Sweet Home Chicago Telethon, including my conversation (via Zoom) with Bulls’ star ⁦@ZachLaVine⁩ & former Bulls champs ⁦@34billy42⁩ & Toni Kukoc. We discuss the Last Dance, games without fans & a whole lot more. pic.twitter.com/a0snb9Gh7p

•   Sorry if it feels like I’m just advertising a bunch of stuff. With The Last Dance coming to a close, I just thought it’d be good to know all the ways to make it live-on just a bit longer. And arguably the best way to do that will be with the ABC Special set to air on Tuesday night titled After the Dance with Stephen A. Smith: A SportsCenter Special. Magic Johnson will serve as a co-host and a number of other stars will enter the chat for an in-depth conversation on the series as a whole. Maybe if we’re lucky, Jordan himself will Zoom bomb the show and curse everyone out!

•   Coby White will go live later today with Ryan Arcidiacono. What do you think White’s quarantine hair looks like?

•   Bleacher Report’s Will Gottlieb became the Bulls GM in the site’s fantasy league, and he made quick work of switching up the roster. Thoughts?

•   I’m not sure some of these trades he pulled off would happen in real life (that’s fantasy basketball for ya), but I like the approach. Overall, he basically went for an entirely new rebuild. The Bulls have three first-round picks from three struggling organizations, which is never something to complain about. Plus, there is a solid group of veteran talent that, in theory, could help these young guys transition into the team’s true leaders. I still don’t think there is a “star” on this roster though, which is ultimately a problem. With that said, the Bulls seem to have plenty of options to find that star with White, Hunter, Hayes, and three future firsts. In general, this puts the team in a way better position than they are right now to find their next centerpiece. I will say, I still don’t love the idea of trading Markkanen/LaVine. We need to see them with a smart head coach and front office structure.

•   The More You Know: Michael Jordan’s first game in Chicago as a member of the Bulls happened in a high school gym.

•   I’ve seen this quote bouncing around a lot over the last 24hrs. To clarify, Jordan said this in 2015. I’m not saying a 52-year-old Jordan has a way better chance than a 57-year-old Jordan, but I think it’s worth noting he isn’t talking about his current self or current roster. Anyway, be careful Miles Bridges. The old man game is likely strong with this one.

Let’s get it then https://t.co/7MbAOAFhSL

A look back at the life and career of Chicago Bulls legend Michael Jordan.https://t.co/7AiUBwg0z7