Yep, I'll Watch That: A Bunch of 90s NBA Legends Just Hopped on a Zoom Call Skip to content 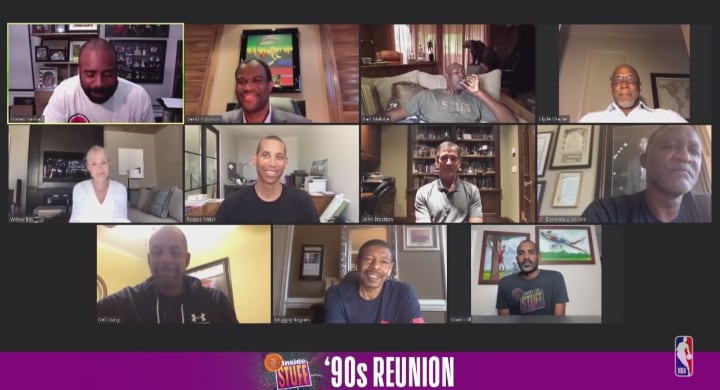 In the midst of The Last Dance craziness, I wouldn’t be surprised if you missed the awesome NBA Inside Stuff’s 90s Reunion.

Other than Ron Harper popping in for a little bit, the Bulls didn’t have much representation. But regardless, with this many big-time NBA personalities in one place, it’s hard not to enjoy the conversation, especially when it so easily goes off the rails. Ahmad Rashad did his best to try and steer the conversation in one direction, but it didn’t take long for the players to go off into a handful of extremely entertaining side tangents.

Unfortunately, the stream in its entirety looks like it was taken down, but the NBA did upload a “best of” video for our viewing pleasure, so check it out!

By the way, if you watch closely, you’ll see Malone try to do his best MJ impression with a big fat cigar and Shaquille O’Neal take some hefty huffs out of what looks like a hookah(?). Good stuff.

Anyway, if you don’t have enough time to sit down and watch the full 20 minutes, I recommend skipping to the 12 minutes mark. Barkley jumps-start an appreciation train that becomes unexpectedly heartwarming. No matter past rivalries or relationships, you can tell this 90s NBA community is incredibly strong and appreciative.

I don’t know how to describe it, but it just feels like something we all need right now.