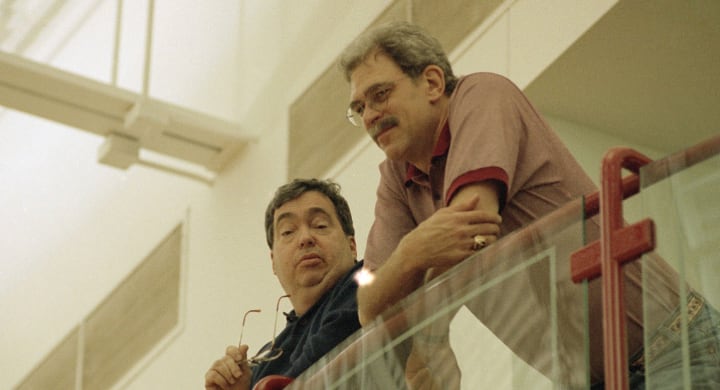 The Chicago Bulls held a gun over their foot in the mid-to-late 90s, and if it wasn’t for Michael Jordan, they would’ve pulled the trigger. Sooner.

It’s yet another accomplishment to add to Jordan’s resume. His greatness single-handedly kept the Bulls front office from confronting their worst enemy – themselves. Over the years, we’ve come to learn that GM Jerry Krause searched for a way to mix-up what was already a winning team. His disdain for Phil Jackson drove his obsession with future Bulls coach Tim Floyd, and as he watched Michael Jordan’s reputation sky-rocket to never before seen heights, the jealousy set in (or so we’ve been led to believe).

Obviously, we’ll never quite know every emotion and consideration that went into the Bulls decision to rebuild in 1999; all we know for sure is that Jordan wasn’t a fan. The door may have been open for the G.O.A.T. to return, but management seemed to do everything they could to make that as difficult as possible. They got rid of his coach and were bound to get rid of his teammates. They chased Jordan away, and the moment he rode off, Jerry Reinsdorf looked down to find a hole in his foot. Oh, that old thing? I did that on purpose!

To this day, the Bulls owner will defend the organization’s decision to blow things up, so much so that he took offense to Jordan’s comments about the dynasty’s end in The Last Dance. However, it’s harder than ever to advocate for the way the franchise went about this change.

In 1999, the Chicago Bulls went from 62-20 NBA champions to 13-37 NBA bums in the blink of an eye – the team wouldn’t make their next playoff appearance until the 2004-05 season. With the two Jerry’s (which sounds like a horrible sitcom title) in complete control, the Bulls organization began to plummet straight toward irrelevancy, setting the foundation for the next 20 years of Chicago basketball.

As SportsCenter not-so-kindly pointed out the other night, the Bulls have just five playoff series wins since the 1998 season and have gone through 10 head coaches in the interim. In addition, the organization has had 13 lottery picks over this span compared to none over the previous decade.

Just take a look at this depressing-ass graphic:

Someone wake Reinsdorf up pic.twitter.com/TORLG2sWEU

ESPN should have given Bulls fans a disclaimer before they slapped us across the face with reality like that, especially when we’re all hyped up after The Last Dance! In any case, one thing has become crystal clear: The Bulls were screwed from the moment the 1998 season came to an end.

But don’t take my word for it. Some of the leftovers from that post-Jordan-era roster discussed exactly that with HoopsHype’s Alex Kennedy, and you’ll definitely want to check it out. Note, however, that I’m going to discuss just one of the many maddening comments made therein. If you want a fuller picture of the dysfunctional house of Jerry(s) – Reinsdorf and Krause – be sure to check out the original article right here.

Are you ready to be peeved?

Here’s how former Bulls beat reporter for the Daily Herald Kent McDill described how Krause and Reinsdorf viewed free-agent targets: “The Bulls organization – whether it be Krause or Reinsdorf – thought that you would take a pay cut in order to be a member of the Chicago Bulls, that being associated with a franchise this successful is worth more than the money you can make elsewhere. Nobody, nobody, was buying that argument.”

Not fighting for free agents and not investing in talent became the Bulls MO over the last two decades. And while Krause deserves blame, Reinsdorf has carried that mantle, himself. Indeed, he likely instilled this same mentality in John Paxson, whose primary understanding of how to run a front office came from watching Krause and Reinsdorf operate.

And while you might be able to play the “we used to be great,” card for a little while (whether it worked in the first place or not), enough burned bridges will eventually bring things to an end.

And indeed, the more the Bulls continued to lose, the lower the bar became. By the late 2000s, expectations for a good Bulls season were nowhere near what they once were. However, this same “you should want to be here” mindset lingered on as the front office’s philosophy. Whether it be the team’s initial decision to rebuild through the draft, the inability to maneuver the 2010 free agency, or the decision not to invest in Jimmy Butler, this overarching feeling of not needing to prove their worth has plagued this organization for years.

The inability to break old habits is also exactly why it’s so important the franchise hired outside the organization for the first time in the Reinsdorf era. It may have taken forever, but this team has finally come to the realization that things have been fundamentally unsound for a very long time. New front office leaders Arturas Karnisovas and Marc Eversley will have once heck of a job on their hands, but the fact they haven’t been tainted by the ghost of front office past is a huge advantage.

Here’s to hoping the Bulls will be less screwed from here on out.