Wait ... That WASN’T Luke Kornet’s Mom? Reinsdorf Doubles Down on the Rebuild, and Other Bulls Bullets
Search
Skip to content 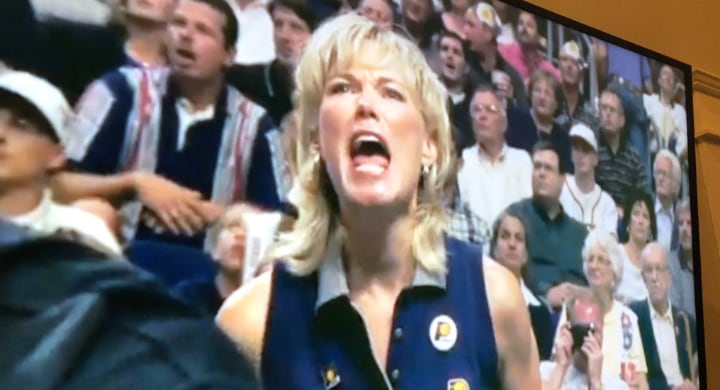 Today marks one full year for me here at Bleacher Nation! *pops some early-morning champagne*

Thanks to everyone who’s stopped by to read a post, leave a comment, or simply like a tweet. We’ve had an incredibly weird year in the basketball/sports world, but thank god we’ve been able to go through it together. Now, let’s hope this next year is actually full of some solid Bulls basketball!

•   Remember the Pacers fan who screamed some hardcore F-bombs in the Bulls direction during The Last Dance? And remember how we all thought that fan was Luke Kornet’s mom? Well, that – unfortunately – isn’t the case. My naive brain, among many others, fell victim to Tracey Kronet’s joke/troll job over Twitter on Sunday night.

•   A news anchor in Nashville, Kornet admitted she shared a striking resemblance to Martin Harrison – the woman you’re actually looking at in that photo. Both also happen to share an overwhelming passion for the game of basketball, but Harrison’s potty mouth is ultimately the key difference. According to Tracey, we shouldn’t expect her to be courtside flipping off LeBron James any time soon … which is a huge bummer. Anyway, if you’re interested in the story behind Harrison’s extreme fandom, check out one of the latest pieces from The Athletic’s Scott Agness. And if you’d rather use your ears instead of your eyes today, David Kaplan had her join his show on ESPN 1000 early today.

•   Ugh, Jerry Reinsdorf opened his mouth again. In a conversation with The Athletic’s Darnell Mayberry, the Bulls owner opened up about Jerry Krause and the storytelling within The Last Dance. We already knew he wasn’t satisfied with the way the docuseries wrapped up, but, this time around, he seemed to hammer home how hard it would have been to sustain success even with the current roster. Reinsdorf said the Bulls “barely won” the Finals in 1998, and while I understand both the Jazz and Pacers gave them a hard time, they still won the Finals in 6. Sure, the team’s 22 playoff games were the second-most of any Finals run (1992 the Bulls played 22), but I don’t think that’s an A+ reason to break up a dynasty.

•   As expected Reinsdorf defended Krause’s work, and when it came to the disconnect he had with many of the players and head coach Phil Jackson, here’s what Reinsdorf had to say:  “Well, obviously I was in the middle. My job was to try to get them to work together. It didn’t matter to me whether they liked each other. I needed to get them to work together, and they did. So, in a way, I think I probably achieved my goal. Six championships are a pretty good indication that they worked together OK. I would have preferred if they liked each other. But more importantly was that they could work together successfully and they did.” I kind of get where he is coming from … but I think it should matter whether or not these guys like each other. Especially in today’s NBA, this philosophy wouldn’t fly and reads a tad tone-deaf.

•   Jordan said he wanted to go for his 7th ring … Ahmad Rashad says Jordan’s content with how things ended: “Yes. I think he’s 100 percent OK. He did what he wanted to do. He played for 15 years. He gave it all he could, and he’s leaving, you can’t even get him in an argument about who’s best, who’s this, that and the other.” I think what we see here and what we saw from Jordan on Sunday night can both be semi-true. Jordan probably isn’t filled with unbearable regret thanks to six rings and an iconic last shot in a Bulls uniform, but that doesn’t mean he can’t wish things ended differently.

Horace Grant Pops Off on MJ: I Am Not a Snitch, and Nobody’s Taking My Foodhttps://t.co/ZDuwmt2vGI

•   When Marc Stein writes, I listen.

Last word on “The Last Dance” and a basketball public that just wanted Michael Jordan in that chair via any means necessary … via the digital version of the @nytimes weekly NBA newsletter: https://t.co/AJ8avJp9Kz

•   Human flamethrower is cool and all … but I think we can do better.

Time for a Q&A with Coby White!@CobyWhite of the @chicagobulls will be answering your questions at 4pm/et! Submit using #NBATogether

“That’s probably got to be at the top,” Pippen said of his Ewing Dunk. “Any time you dunk over a seven-footer and a so-called shot blocker, it’s something.”