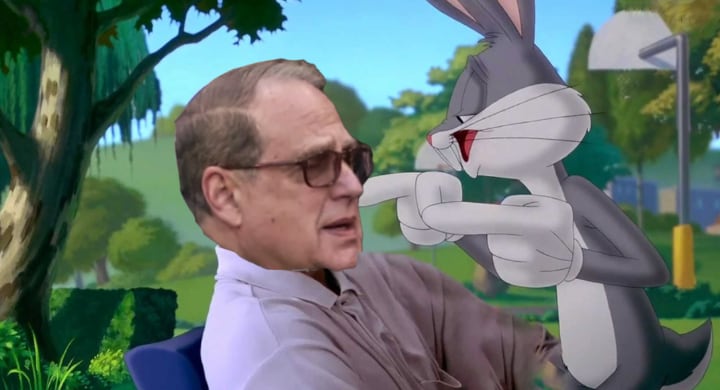 Just sayin, I think Bananas were put on this earth to go in bread, specifically with chocolate chips.

Today we remember those who gave everything to keep our country safe.#MemorialDay pic.twitter.com/vHu4Xn7ap1

•   Yesterday, Bulls owner Jerry Reinsdorf hopped on the Los Angeles airwaves because … why not? While the interview with KTLA was a fairly random choice, Reinsdorf actually came off pretty darn well. Most of the questions thrown his way were softballs, but I appreciate the guy’s candor and general participation. In fact, when asked about many of the recent players’ less-than-satisfied reaction to the docuseries, Reinsdorf had quite the reasonable response: “I understand why they were frustrated, but they’re probably a little hard on themselves, I think they probably came across better than they think they did. When you’re looking back 20 years memories tend to differ. Michael’s memories might be a little different than my memories, doesn’t mean either of us are wrong, you just remember things differently.”

•   Well, this feels weird; I basically agree with everything he just said. As I noted yesterday, memories differ and we’re talking about something that happened over 20 years ago. In my opinion, the stakes aren’t high enough for folks to get so petty. I’m sure Michael Jordan – the guy who was the most famous person on the planet and experienced a never-ending media circus – has a different perception of life at that time than someone like Craig Hodges or Horace Grant. I don’t think we can fault him for that. In addition, I completely agree that most of these players came off far better than they think. And, indeed, I continually fail to understand this sudden cry for more Scottie Pippen support. I always have and will love Pippen, and I thought he came across perfectly fine throughout the entire series. Not to mention, Jordan made very clear how important a role he played in the team’s overall success. Did the mad players just forget about that? Like, are he and his teammates mad because director Jason Hehir decided to share the facts? I don’t really get it.

•   One last note on Pip: I actually know several people who watched the doc (and weren’t expert Bulls fans) who walked away from it saying, “I love this Scottie Pippen guy.”

•   Now, it wouldn’t be a Reinsdorf interview without one enraging comment. Are you sitting down? Do you have a pillow nearby to punch? Is your dog out of the way so you don’t accidentally kick him/her? Cool. Here’s what Reinsdorf said: “To this day, I haven’t seen Space Jam. It’s not the kind of picture that I’d really care to see.” *SCREAMS EXPLETIVES FOR FIVE MINUTES.*

•   Yo, it’s one thing to say you’ve never seen Space Jam. It’s another to follow up that comment with “it’s not the kind of picture that’d I’d really care to see” (I totally lol’d when he said “picture,” by the way). Jordan is the most historic player in your franchise’s history, and you can’t pay the man the common courtesy to watch his instant classic!? Also, this thing is on streaming service and TV pretty frequently, so Reinsdorf really has made a serious effort to never tune in. The (basket)balls on this man.

•   I mean, technically you could make this argument if the regular season is canceled.

I hope the NBA takes just the current playoff teams to the bubble so that I can tell everyone the Bulls would indeed have made the playoffs if they had the chance.

Former Chicago Bulls forward Carlos Boozer said on IG Live with theScore that he believes Joakim Noah never got the credit that he deserved during his time with the Bulls.

Boozer on Noah: "He was the heart and soul of our team. Straight savage. Joakim is special."

•   Real talk though, a player like Noah can oftentimes be invaluable, and the Bulls have missed him ever since they traded him. He’s the kind of aggressor and sparkplug that can motivate an entire team. Sometimes that general energy during a tough game is enough to push a team over the edge. Hopefully Arturas Karnisovas and Marc Eversley can prioritize finding someone with similar qualities.

•   Benny the Bulls decided to be savage this Monday.

•   Derrick Rose’s dunk on Joel Anthony will always be one of my all-time favorites.

Nine years ago, Derrick Rose put on a dunk show against the Heat in the playoffs.

This is going to be fun… catch the best athlete hosts of @nbcsnl all week long on NBCSN!

It all starts with Michael Jordan tonight at 7 p.m. 🐐 pic.twitter.com/EMWSQOaYNS