Amin Takes Over, Messed Up Rookie Rankings, Rose's Emotions, and Other Bulls Bullets Skip to content 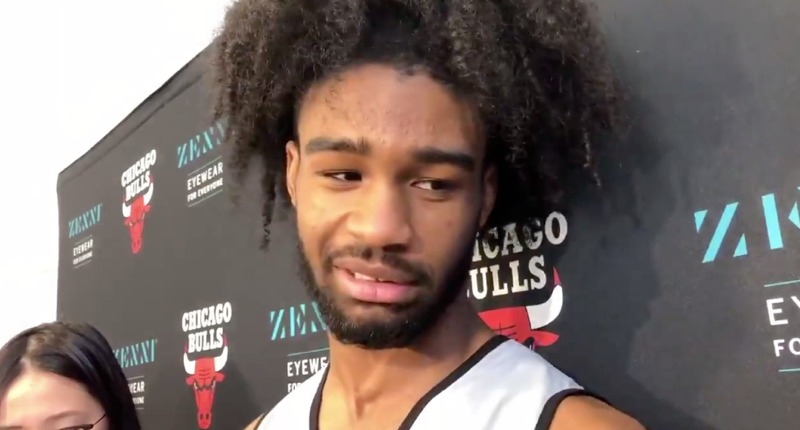 The Chicago Bulls continue to remind us to speak out and stand with every black American across the country.

A statement from Nancy & Michael Reinsdorf on behalf of the Chicago Bulls: pic.twitter.com/4PhMOk8u4z

The GOAT also weighed in …

•   Let’s switch to our less important basketball bullets … It’s officially official. Former ESPN and current Fox Sports announcer Adam Amin will add the Bulls play-by-play job to his long list of tasks. For those that actually watched a bulk of the Bulls games this season, you probably heard Amin at least once. Amin, 33, announced several road games and was slated to announce four more before the 2019-20 campaign came to an unexpected halt.

Chicago's own @AdamAmin will step into the TV play-by-play role next to @Stacey21King.

•   While I know some were crossing their fingers for White Sox announcer Jason Bennetti, I think Amin is a great choice. Certainly considered a rising star in the industry, he feels like the right voice to pair alongside this (hopefully) new “Bulls image.” Not to mention, the transition is coming at what feels like a natural time. Not only has the front office finally been overhauled, but it’s the right time for Funk to enjoy retirement. I mean, Funk doesn’t deserve any more bad basketball … the Bulls have put him through enough over the past several years. With that said, I hope Amin can start off his Chicago career on a high note.

•   Also, I think it’s kind of cool Amin began his NBA broadcasting career in Chicago. As the team’s press release notes, Amin’s first NBA game behind the mic came back in 2016 when the Bulls took on the Timberwolves. Full circle!

•   Per usual, I have a bone to pick with one of Bleacher Report’s rankings. The site decided to rank which current NBA rookies will have the best careers, and Coby White sits 10th. I guess making the list is better than nothing, but I have a problem with some of the names that sit ahead of him, including (N0. 7) Kendrick Nunn, (No. 6) Terence Davis, and (No. 2) Brandon Clarke. Listen, I like all these guys, but I can certainly envision White having a better career than each. While Nunn has had a great start, he’s also had time to marinate in the G-League prior to this season and has the benefit of a pretty awesome head coach/team around him. It’s very possible we haven’t seen the peak of his powers yet, but I think White’s ceiling is just higher. Plus, it’s not like Nunn is adding a ton as a true facilitator; he’s averaging only 3.4 assists per game (and 2.7 rebounds). He plays hard and doesn’t make a lot of mistakes, but his potential just doesn’t feel as exciting as White’s. Oh, and the Heat’s Tyle Herro is also above White at No. 5 … which, eh.

•   As for those other two I mentioned. Davis is an undrafted free agent who averages 17 minutes per game for the Raptors … what has he done to make people think he’ll be that much better than White? On the other hand, Clarke has some extreme upside, so I can understand putting him ahead for now … but at No. 2!? Above Ja Morant!? WHAT!?

•   I get it. White still needs to earn his keep, but I think it’s pretty impressive he was able to flash the skill set he did this season in such a tumultuous situation. Considering the Bulls have proven to be real sucky in the player development department, what we watched this season was basically White showcasing his raw talent. With the right head coach and organization behind him, I think we have plenty of reason to believe White can be easily be one of the top-5 players in the 2019 Draft Class.

•   Michael Jordan wrote a love letter that sold for roughly $26,000. That’s a sentence I never thought I’d write before.

•   When Rose showed emotion like this … it was awesome.

In the wise words of @Stacey21King …