LaVine Wants You to VOTE, Bulls Statement on Being Excluded from Restart, Listening to Jordan, and Other Bulls Bullets Skip to content 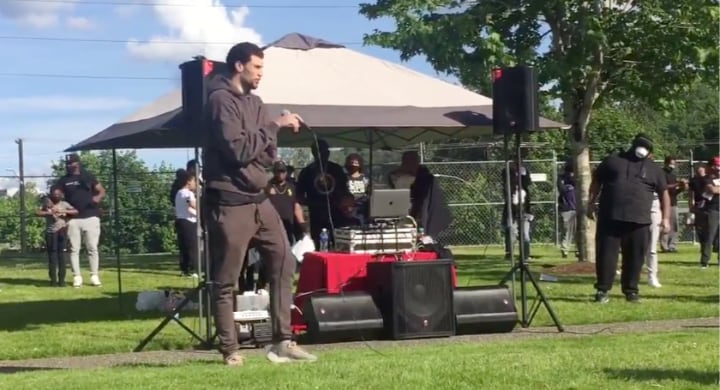 Does anyone else here just forget to eat sometimes? (Michael: Literally never … but I’ve heard of crazies like you).

I know it’s definitely not a healthy habit, but far too often I find myself working away until I realize it’s 4 p.m. and I haven’t put any food near my piehole. I’ve heard there are some apps that remind you to drink water, so maybe I’ll try to make one that reminds me to eat. *proceeds to work on app development and forgets to eat*

“Go vote! … I’m going to because I know it’s going to change something”

•   The Chicago Bulls were one of only eight teams to have their season end yesterday, and here’s what they had to say:

•   Solid response. The best part easily comes from Michael Reinsdorf, who says: “We will now shift our focus to continue to build or team under the new leadership of Arturas Karnisovas …” As I pointed out in Thursday’s bullets, I want it to become extremely clear over the next few weeks that the fate of this organization rests in the hands of Arturas Karnisovas and Marc Eversley. I’m glad Reinsdorf is making that clear in what is technically his first offseason statement, but actions speak louder than words.

•   Meanwhile, Karnisovas expressed disappointment in the fact that he and Eversley will not get a chance to evaluate their team in a game environment. To that I say, isn’t that kind of how these front office changes always go?  New leaders are almost always hired during the offseason and most of the initial work/evaluation has to take place off the court. I understand that it would have been beneficial to watch a couple of games up close, but it’s not absolutely necessary. Not to mention, the NBA has just handed him an enormous amount of time to turn this team into his own. With the Bulls not scheduled to play another game until December, Karnisovas and Eversley can still do all the in-depth evaluating they want. Considering how toxic of an environment it seemed to be behind the scenes this year, I think it’s best this team doesn’t have to be stowed away in Orlando together. I want Bulls basketball as much as the next guy, but this extended offseason will do the team more good than if they played again.

•   ICYMI: K.C. Johnson joined Adam Amin and David Kaplan for a brief discussion about the return of the NBA on FB Live.

The NBA is back

The NBA is back… but the Bulls' season is over. Give us your questions and comments as we head into a long offseason

•   One thing Johnson made sure to reference is Eversley’s previous comments about Lauri Markkanen. When speaking with the media upon his hire, Eversley said he looks forward to discovering what caused The Finnisher to experience such a setback. While we probably assumed the Bulls new front office duo still saw potential in Markkanen, it is surely reassuring to know that fixing his troubles is at the top of their to-do list. In a lot of ways, this is also why I hope the Bulls are instructed to have a mini training camp sometime this summer. The sooner Karnisovas and Eversley can get a closer look at this current version of Markkanen, the sooner they can find ways to get him back on track.

•   NBC Sports Chicago has been quick to release their player grades for the 2019-20 season, and it got me thinking … does anyone really deserve an A on this team? I know it’s easy to say Zach LaVine, and I’d probably agree with you, but I’m not going to put up a huge fight if a B+ is the best grade you give out.

•   It doesn’t matter who you are, you always listen to the GOAT:

“He’s clearly the most respected voice in the room.”

Adam Silver on why the NBA followed Michael Jordan’s advice and went with the traditional playoff format. pic.twitter.com/nFzIohnzrE

•   By the way, if you want more from Adam Silver’s interview with TNT, just go over to their Twitter profile. I think he’s supposed to talk with the media next week though, and we should get more legitimate updates on the NBA’s return then.

The Bulls Have Made a Lot of Bad Moves Over the Last Six Years … But Which Was the Worst?https://t.co/5RxBXqlpPg

•   This is a GREAT read. And what’s made even more evident is how strong of a voice the players hold behind the scenes. Other leagues should take notes.

It’s a small world after all. And relationships matter. Here’s how the bonds between Adam Silver, Chris Paul, Michele Roberts and Bob Iger helped the NBA find its way back. https://t.co/f5yexP5VyR