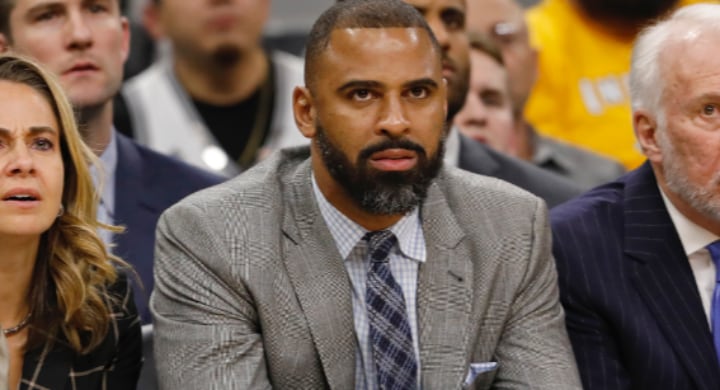 The Bulls head coach position isn’t even open yet, but apparently, Arturas Karnisovas and Marc Eversley have their front-runner.

According to the Sun-Times’ Joe Cowley, 76ers assistant coach Ime Udoka is in the best position to land the possible (inevitable?) head coach vacancy in the Windy City.

Here’s what Cowley had to say:

Sources have told the Sun-Times that 76ers assistant Ime Udoka is the front-runner to become the Bulls’ new coach, with Raptors assistant — and former Bulls assistant — Adrian Griffin also in the picture.

Karnisovas and Eversley are familiar with both men, and each is more than qualified for the position. It’s a win-win, but it’s also a process.

With all of the above understood and filed away, the statement I’m most confident about from that report is this: “it’s also a process.”

As we learned earlier this morning when Karnisovas spoke with the media, the new Bulls front office will take their sweet time when it comes to any future firing or hiring. While all signs have pointed to a Boylen departure sometime soon, the fact of the matter is, he’s still employed by the Chicago Bulls. And with that being the case, in my opinion, it feels a tad premature to be naming any clear front-runner.

Now, with that said, both Griffin and Udoka have been mentioned as potential candidates over the last several months, so I certainly believe they’re a topic of conversation behind closed doors, regardless of status. And to that end, I wonder if this front-runner comment comes thanks to certain vibes Eversley has given off over the past several weeks. Eversley worked with Udoka while with the 76ers, but knowing the strict evaluation protocols Karnisovas and Eversley like to follow, it simply feels odd that this organization would already have a front-runner in mind.

I still expect an exhaustive coaching search, once Boylen is let go.

But don’t get me wrong. None of this is to pick apart Cowley’s reporting (he’s heard what he’s heard), but he did bury the news toward the end of his recent article, and the headline specifically states the Bulls are prepared to take their time with this decision. Perhaps they truly do have their eyes set on Udoka, and the plan is to wait for the 76ers to be bounced from the playoffs to pry him away. However, for the time being, I wouldn’t read too much into this.