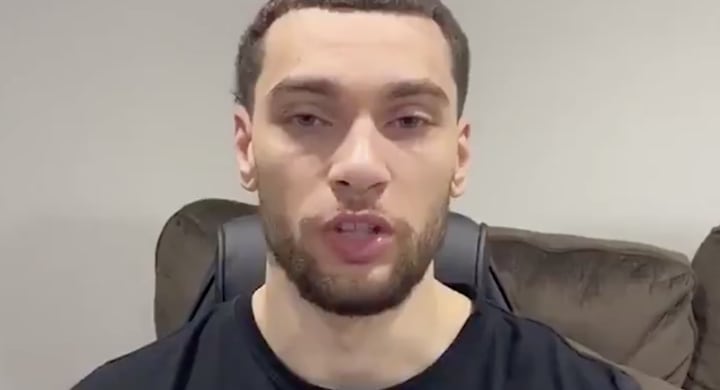 Zach LaVine hasn’t shied away from an interview over the past several months, but this is the first time in awhile he’s taken time to speak with Chicago media about some of the ongoing change within the organization.

Let’s take a look at what the guy had to say:

•   We’ve heard a lot about how collaborative both Arturas Karnisovas and Marc Eversley like to be, and according to LaVine, it’s not all talk. During his conversation with the media on Monday, LaVine said he’s spoken with both Karnisovas and Eversley numerous times, and Karnisovas, specifically, has been picking his brain on what the organization has to do better.

Zach LaVine is “excited” about #Bulls’ front office changes. He has been in contact with Arturas Karnisovas. They’ve been talking about the “whys” of what worked and what didn’t do.

•   While LaVine may not be the bonafide star this team needs to take the next major competitive step, he’s still the designated No. 1 player for the time being. Not to mention, the guy is still only 25-years-old with plenty of potential left in the tank. I would consider him one of the most important voices to hear from on the player-side, and if Eversley is set on being the player-first organization to which he often references, this feels like a great way to start. Plus, we all know LaVine isn’t going to sit back and let the Jim Boylen nonsense go undiscussed. A number of players have reportedly spoken out against the head coach, but I have to imagine LaVine has been at the front of the line. I mean, just read what he told reporters about Boylen earlier today:

Zach LaVine when asked if Jim Boylen has done enough to return as #Bulls coach… pic.twitter.com/KVB0pxUJwL

•   As always, LaVine is carrying himself with a sense of professionalism … but does that sound like a guy who wants to be anywhere near Boylen ever again? Not really. Saying nobody “tries to fail” is just a much nicer way of saying “Oh, that dude? He’s trying, but failing.” I sincerely believe these players saw the passion and care from Boylen, but they also clearly saw the ineptitude when it came to head coach duties.

•   LaVine continued to tell it like it is when asked about the Bulls season officially coming to an end yesterday when the league approved a plan that kept Chicago out of the Orlando bubble:

LaVine on season over: "It sucks. You have to understand it’s a weird time, especially with everything that’s going on right now. It’s upsetting too. We weren’t even good enough to get to the play-in game. It just shows we have to do a lot of things differently."

•   Someone bottle up this energy and pour it in the Gatorade cooler before every game next season. I don’t want frustrated players, I want fed-up players. I want guys on the court next season that can’t stand the continuous losing, and sometimes it can take longer for young players who’ve never experienced winning at the NBA level to tap into that emotion. LaVine hasn’t gone through a single winning season over his six seasons in the NBA, and it’s clear he’s not ready to go through another.

Zach LaVine on long layoff between regular-season games: "I've been working out every day. I was ready to hit the ground running. I'm ready to become a winning team and a winning player."

•   Relatedly, whenever LaVine has done an interview over the course of this nearly three-month hiatus, he’s talked about leadership. The guy seems prepared to take the next step toward becoming a true on-court leader, whether I think he’ll accomplish that is a different story, but I’m a fan of the continued message.

Zach on improving as a team: "Change starts with us, as players. We're the ones on the court… we need to change our identity and become a winning culture. We had high expectations coming into this year and it wasn't anything like what we wanted."

•   Ah, here’s a pretty telling quote about the past regime …

Zach LaVine on front-office changes: "I'm excited. When you change something, you're willing to put yourself out there and get better. I'm all for it – this team is focusing on getting better. I'm very happy."

•   Of course, LaVine also opened up about the country’s current fight against systemic racism. He said Arturas Karnisovas held a zoom meeting with the team to talk about the death of George Floyd and reiterated some of the comments he made at a rally yesterday in Seattle.

Zach on speaking up against social injustice: "I spoke in Seattle at a rally yesterday and I just encouraged them to go vote. I haven't voted before, and that's not doing my part in the community. Not just vote for presidency, but things in your own community as well."

Zach's message to the younger generation: "Educate yourself. Stay active. Don't be afraid to put yourself out there and be different either. Go out and try to make a change – even if you're the only one in the room talking, don't be afraid of that."

•   Just a reminder, throughout this hiatus, LaVine hasn’t shied away from doing what’s right. He’s donated tens of thousands of meals to front line workers fighting the ongoing COVID-19 pandemic, as well as thousands of headphones to local Chicago schools. I commend the guy for continuing to make his voice heard and representing this organization well during a tough time.