Would You Give Thibs Another Shot? Jordan Born a GOAT, Roster Versatility, and Other Bulls Bullets Skip to content 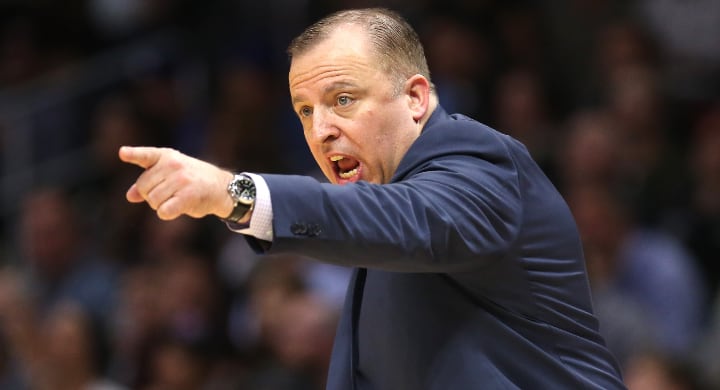 •   As Bulls fans often like to do, we’re going to forget Michael Jordan’s Wizards era ever happened, and instead, think about how awesome it is that his basketball career (basically) started and ended on a Championship-winning shot.

•   As he said in The Last Dance, the game-winner for UNC turned Mike into Michael Jordan. And while I’m sure he would’ve found a path to superstardom regardless, that one bucket certainly adds a fun additional level to his legacy. Be it as a 21-year-old kid or a 35-year-old juggernaut, Jordan was always the same player (I know he got better along the way, but he’s just been different from Day 1). Born a GOAT.

•   If you got to pick the Bulls next head coach, who would it be (has to be a realistic option)? I’m truly curious to know how many of you would answer Tom Thibodeau. The Sun-Times says the former-Bulls coach would be the “ideal” option, and while I’ve always been on the thumbs-up side of Coach Thibs, I can still pretty confidently say I don’t want him back. If he landed the gig, I wouldn’t be too upset, but I’ll almost always take a fresh start over a do-over. After all, a sequel is rarely as good as the original. To keep trending in the right direction, I’d rather see this organization continue to add new pieces.

•   One major reason to be excited about the Bulls current roster: the versatility. As Sam Smith touches on in his latest mailbag, the Bulls can run a handful of different looks next season, especially in the frontcourt. For example, I wouldn’t be shocked to see Wendell Carter Jr. get some time at power forward or maybe even Otto Porter (but that depends on if the team bolsters their wing depth this offseason). And while Markkanen hasn’t proven reliable underneath the basket, as a seven-footer, it just doesn’t feel right to give up on lineups that put him there. As for the backcourt, we’ll have to keep an eye on Coby White (whom I hope starts at point guard). If the team opts for a pass-happy guard in the draft, and plenty can be found in this draft, that could certainly shake-up how we expect the rotation to look next season. Overall, thanks to the Bulls having another high pick, I think we’ll start to understand how creative Karnisovas and Eversley want to be on draft night. I mean, whomever the team selects will likely be viewed as an impact player … yet the Bulls already have young talent at every starting position besides small forward. Something to think about.

•   Sooooo can players just Livestream their on-court workouts so we can have something to watch?

Keep the ball moving while you throw your jabs.@drewhanlen @ZachLaVine pic.twitter.com/iBlaPxpppM

•   Darn you parents, I was one day away from sharing a birthday with Joakim Noah.

Which NBA player was born the same day as you? Find out here. https://t.co/C5xk3SvJDe pic.twitter.com/QFXzrJnsOE

Does it get any bigger than this?

Relive the @Suns triple-OT thriller in Game 3 of the 1993 NBA Finals against MJ and the Bulls, tonight at 8 PM on FOX Sports Arizona. pic.twitter.com/3ejxpULEta