Uh, What the Heck Are These Modern-Day Player Comps for the Last Dance Bulls? Skip to content 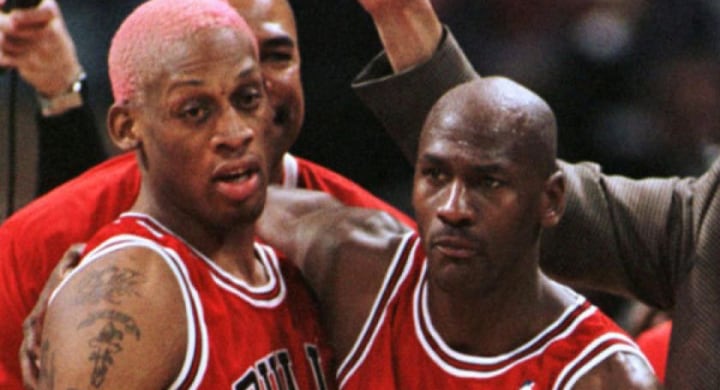 Whether we’re calling Wendell Carter Jr. the next Al Horford, or Coby White a better-shooting De’Aaron Fox, everyone loves making NBA comparisons. Heck, it usually happens as soon as they’re drafted. And while most of these labels don’t necessarily pan out, comparing one player to another feels like the easiest way to communicate a new player’s game/style/type. Not to mention, it’s just flat-out fun.

That said … Stats Perform may have taken things a little bit too far … Okay, way too far.

From Omnisport and shared by Yahoo Sports, Stats Perform’s AI Analysts created an algorithm that compares players over the last decade to members of the 1997-98 Chicago Bulls.

Before I share with you the, uh, interesting results … here’s how the calculations were made:

It [the algorithm] uses a host of era-adjusted per-30-minute stats and more advanced rate metrics, and calculates the Euclidean distances between the seasons of each of the 1997-98 Bulls and every other player since the start of 2010-11.

From those results, a relative similarity percentage can be calculated i.e. the player since 2010-11 with the greatest similarity to one of the 1997-98 Bulls would score closest to 100 per cent.

By looking at player seasons since the start of 2017-18, we can see who in the NBA’s modern era is the nearest equivalent to Jordan and the rest of the Bulls in that historic season.

If not, all you really need to know is that the following results are supposed to be the best modern-day player comparisons for The Last Dance Bulls (aka … one of the most iconic teams in NBA history). Additionally, these results are based on a relative similarity percentage and, for further reference, only go back to the 2017-18 season.

Did they just compare Marcin Gortat to Dennis Rodman? *takes a deep breath*

Before this triggers the short of reaction that forces you to steal a child’s lollipop and punt it to the moon, we should keep in mind some players are far more similar to others. For example, this algorithm has 2019-20 Gordon Hayward drawing a 65.2 relative similarity percentage to Toni Kukoc, whereas 2018-19 Marcin Gortat draws only a 9.7 relative similarity percentage to Dennis Rodman. In other words, it’s extremely hard to find another Dennis Rodman.

The most understandable comparisons are probably Kerr to Curry, Longley to Sabonis, and Kukoc to Hayward, but even these are still pretty weird to see. And when the data is expanded to 2010, the comparisons only gets a tiny bit better.

Okay, at least I’m a little more comfortable with a Rodman-Noah comparison. Also, Parsons to Kukoc makes more sense than Hayward to Kukoc … but a 99.9% relative similarity percentage in 2014-15!? Wow.

As much as I want to pick apart every single comparison made, I’m not about to fight a robot. Not worth it. So if you want to look a little closer at all the numbers, and see a couple of other comparisons I didn’t touch on, I recommend you give the article a read for yourself. Have fun.