Jordan's Draft Anniversary, No Best Player Available, Trading for Rose and Griffin?! And Other Bulls Bullets Skip to content 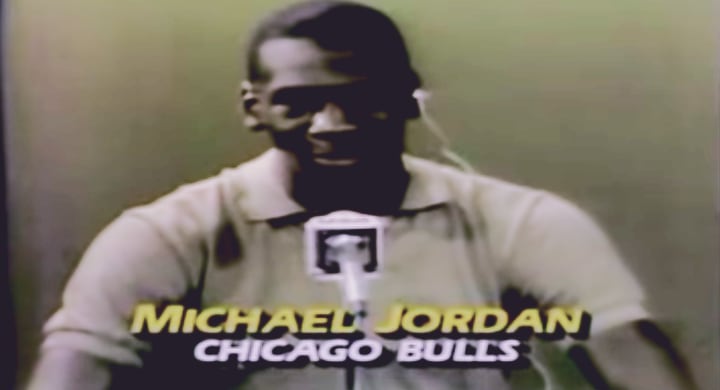 •   Yesterday, we learned the Chicago Bulls will offer paid time off in honor of Juneteenth. The official announcement came earlier this morning ahead of the Bright Star Church Chicago peace march, in which several members of the Bulls organization plan to walk later today. For those in the Chicagoland area and looking to celebrate, I encourage you to check out Block Club Chicago’s post here. As for anyone looking to educate themself further on the history of Juneteenth, here are a couple of links: CBS This Morning, New York Times, Juneteenth.com. Whether it be joining in a march or learning more at home, I hope everyone can find some way to celebrate!

•   I love his draft day interview. The guy is so modest, but we all know deep down he’s thinking “I’m about to be the best player this world has ever seen … and one day verbally beat the crap out of Scott Burrell.”

•   I’ve had variations of this conversation before, but since it pertains to one of my more recent posts, let’s start it up again. The best player available approach isn’t going to be all that easy in the 2020 NBA Draft. I’m not saying this means the Bulls should go a different route, but rather merely pointing out that it isn’t as cut-and-dry as the last couple of seasons. Sure, a draft hierarchy of some kind is bound to fall into place as we near draft night, especially if pre-draft workouts and the combine are allowed to occur. However, even then this draft order will be flimsy at best. Karnisovas and Eversley have both received praise for their evaluating chops, so let’s hope those come in handy right away.

•   And on top of a hard-to-organize draft board, both new front office leaders will head into 2020 knowing they have a young, developing piece at almost every position on the court. No one on this roster has a job locked down, but drafting a player in the same position – regardless of whether it’s via best player available or potential fit – could mean this young talent is most likely to lose their place on the totem pole. Let’s not kid ourselves, whomever Karnisovas and Eversley select, they’re going to work a tiny bit harder to find them an important role. Anyway, I wrote about what a draft selection at each position could mean/tell us about the Bulls future, so check it out (if you want to … I can’t make you do anything … you do you, bruh):

Here’s What We Could Learn from the Bulls First Pick in the 2020 NBA Drafthttps://t.co/4datp4uMKw

•   Bleacher Report said the Bulls should trade Thaddeus Young and Otto Porter for Derrick Rose and Blake Griffin. Before you jump out of your seat and scream “DO IT, YOU COWARDS,” let me remind you of Griffin’s current contract situation. The big man is owed $36.5 million next season and has a player option for 38.9 million in 2021-22. Additionally, there are some concerns about his long-term health after appearing in only 18 games this season due to a knee injury. So while there is a chance Griffin can return to All-Star level, the Bulls get rid of the great flexibility they’re in line to have for the LOADED 2021 free agency. I know adding Rose while getting rid of Porter’s $28.5 million contract feels nice … but I’m not about this.

Projected top five pick Deni Avdija tells ESPN he will resume his season with Maccabi Tel Aviv when the Israeli basketball league returns on Sunday. “Before I go to the U.S., I have a job to finish here in Israel" News story: https://t.co/wOrC3aTF9C

-Intel on guys who have passed the background intel/interview process with flying colors so far.

-As always, feel free to ask questions in the comments section, I answer as many as I can: https://t.co/6UcMyUVbI0 pic.twitter.com/Gec7enzSL9

•   The Knicks coaching search is in full effect … and I’m jealous.

Dallas Mavericks assistant Jamahl Mosley has permission to interview for the New York Knicks coaching job, sources tell ESPN. In his sixth season with Rick Carlisle, Mosley has emerged as a head coaching candidate in league. He interviewed for Cavaliers job last year.

"Race in America: A Candid Conversation" returns this Sunday with some of Chicago's most respected voices. @LaurenceWHolmes, @Jason1Goff, @thetonygill, @KendallG13 & @alexbrown96 have an open discussion on race relations. We hope you'll listen in. More: https://t.co/wduDSNWCeU pic.twitter.com/W0Ovkz8OsT