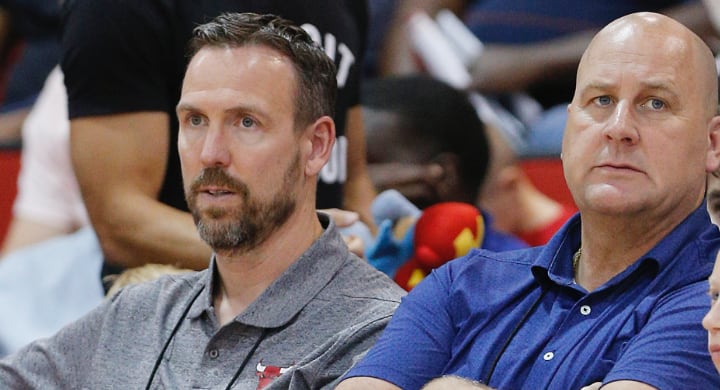 Believe it or not, the Chicago Bulls have a very solid coach … he’s just not their head coach.

Lead assistant Chris Fleming has garnered respect in league circles over the years, also building a successful coaching career overseas before finding his place inside the NBA. Fleming’s work with the Brooklyn Nets offense, in particular, was worthy of praise. And when the Bulls hired him away from that organization one offseason ago, it certainly felt like a solid get.

Unfortunately, he wasn’t able to immediately repeat some of the success he’s enjoyed elsewhere (the Bulls held the 29th offensive rating in the NBA this season), but it appears the majority of that weight falls on the shoulders of head coach Jim Boylen. As we learned a little less than a month ago, some folks still see Fleming as worthy of the big promotion – specifically, the folks inside the New York Knicks organization.

And according to Yahoo Sports’ Chris Haynes, the Knicks will now officially interview Fleming on Thursday for their open head coach position.

Fleming is one name on a long list of head coach candidates for the Knicks, so it remains unclear how interested they truly are in his services. But the invitation alone proves he’s not your run-of-the-mill assistant coach. The Bulls have themselves a proven, respected basketball brain on their bench, and if he doesn’t end up in New York, they should re-evaluate how much of a say he has in the team’s daily operations.

While I still believe a coaching overhaul is soon for the horizon, I also believe Arturas Karnisovas and Marc Eversley would think long and hard about keeping Fleming on board. And perhaps that’s already the message Fleming has received, as the Sun-Time’s Joe Cowley reported back in May that the Bulls assistant coaches, with the exception of Fleming, were actively looking at other jobs.

Karnisovas and Eversley have both expressed their interest in playing at a faster pace, which is something that aligns well with Fleming’s offensive philosophy. Additionally, Fleming wants the wheels to always be in motion (aka ball movement), and with such a young, diverse group of players (especially with no true star), that’s always a good idea.

In general, everything I’ve read or heard about Fleming insinuates that he has a pretty established brand of basketball, and considering the Bulls lack of identity on the offensive end of the court this season, I’m assuming he didn’t have a strong say. Dan Bernstein of 670 The Score touched on this topic a bit several weeks back, and he believes Fleming’s lack of influence is by design.

“Fleming was keeping his powder dry regarding how actively he contributed as an in-game assistant where it would take a village to steer Jim Boylen, to keep him on the road essentially in a game … and Fleming chose to not do that. One, because it would be nearly impossible, and two, because it’s one of these things where sometimes you’re better off just letting a guy show who he is and that might be better for your long term future.”

Considering the head coach interview and the Bulls report interest in keeping him around, this feels like it could hold true (at least to an extent).

Anyway, it’ll be interesting to see what comes of Fleming over the next couple of months. While I don’t think he’ll be at the helm of the New York Knicks soon, I do think he’ll be with the Bulls organization a bit longer than the other coaches on staff.