Noah’s Story, Smiles on the Court, a Productive Porter? Top-100 Players, and Other Bulls Bullets Skip to content 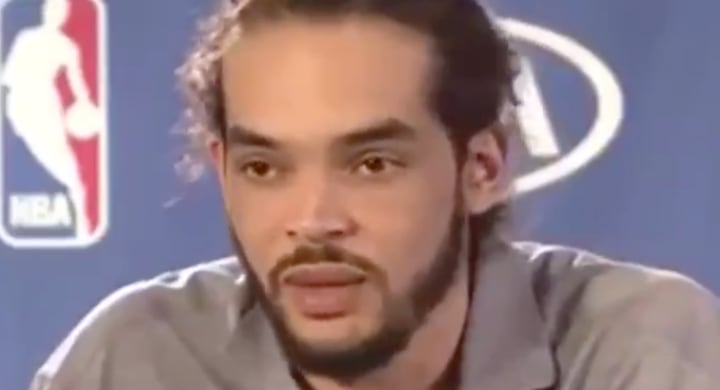 Today is the day. After months of frustration, I’ve finally worked up the courage … I’m getting a haircut.

“I just feel very, very blessed to be in this position right now.” – @JoakimNoah pic.twitter.com/H13AqCJk5U

•   In the interview above, we learn a little more about what exactly happened to Noah prior to the 2019-20 season. The veteran big man had plans to workout with the Clippers back in September, but he then suffered a freak accident and cut his Achilles. Refusing to allow his career to end on those terms, he got in the gym the day after his surgery to work on a comeback. The Clippers hung by his side through it all and gave him the opportunity he wanted once he felt 100 percent. Smart move. We all know Noah’s DPOY days are behind him, but with his boatload of playoff experience and basketball IQ, he certainly feels like the perfect addition to any team with championship-potential. I can’t imagine he clocks too much time on the court in Orlando (especially in the first couple of games), but I’m sure he’ll make his presence felt in one way or another. With the Bulls out of the picture, this will at least give us Chicagoans something to cheer for throughout the restart.

•   Anyway, all these social media videos shared by teams and players have got my spirits high. I know a lot can go wrong over the next several weeks/months, but it’s refreshing to see guys smiling on the court once again. Too bad all those smiles will be crushed next season by Hulk Coby, though.

•   What does Otto Porter need to do during the 2020-21 season for us to consider it a success? I know playing more than 15 games would already be a nice step in the right direction, but I’m curious to know how much a healthy Porter improves this team. The best season of his career came in 2017-18 when he averaged 14.7 points, 6.4 rebounds, and 2.0 assists, and 1.5 steals per game. He also shot 50.3 from the field and 44.1 percent from downtown over his 77 games played. For the bulk of that season, he was 3rd in command behind John Wall and Bradley Beal as the team won 43 games and finished 8th in the Eastern Conference. Oddly enough, it feels like that’s exactly the type of situation and role we should want him to be in with the Bulls this season. Porter should be a consistent presence who puts up anywhere between 13-15 points per game, but he should be focused more on helping the team make winning plays – whether that be with an aggressive defensive stop or a big-time rebound. Porter should be a stabilizing presence who can help reel this young roster back in when things get out of hand. Sam Smith wrote more about Porter’s potential and his 14 games played this season, so check it out.

•   I’d also 100 percent consider next season a success if Porter is good enough and healthy enough to draw serious trade interest from contenders around the trade deadline. Moving him for some additional assets on a contract year would be the best-case-scenario.

•   Bleacher Report listed the Top-100 players from this season and Zach LaVine checked in at No. 44. He was the only Bulls player to make the cut and found himself sandwiched between D’Angelo Russell (No. 45) and Gordon Heyward (No. 43). Thoughts?

•   Sure, a case could made for why the Bulls should trade LaVine, but you will not hear me make that case. Arturas Karnisovas and Marc Eversley need to see if they can be the folks to finally channel LaVine’s skills toward winning basketball. For the time being, I think his value to the Bulls exceeds his value in the trade market. The guy continues to improve and has expressed a clear desire to win with this team. Chicago should at least run things back for another year with a new front office before they reconsider his future within the franchise.

This is why the Bulls should trade LaVine while his value is artificially high. Although the perception of teams is nothing like this. No GM would take LaVine over Smart. https://t.co/l6kqf0Dnup