Here's a Bunch of Jim Boylen Quotes That Prove He Isn't the Guy for the Job (Fun, Right?!) Skip to content 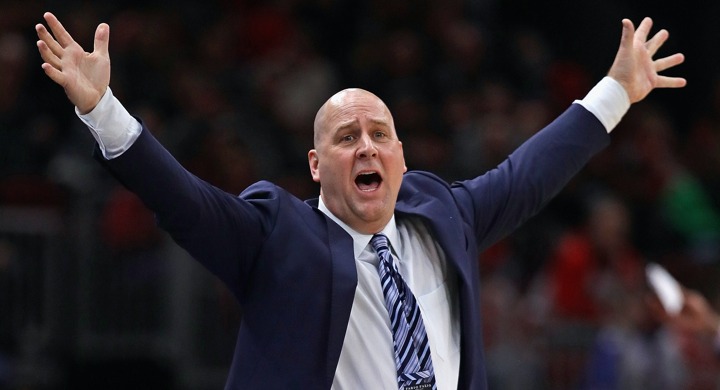 At the end of the day, Jim Boylen’s boatload of bizarre interviews isn’t the reason he should be fired. The Bulls .317 winning percentage, the general methodology, and the overall product on the court are the most damming items on his résumé.

However, with that said, a team needs to be led by someone who can at least represent the organization honorably. Transparency with the media is crucial in today’s league. Not to mention, a coach needs to prove there is a method to the madness – especially when things aren’t going well. Time and again this season, Boylen failed to do exactly those things; and thus, he further failed to show us that he’s a qualified head coach.

Since it’s (for some weird reason) taken this long for Arturas Karnisovas and Marc Eversley to decide on Boylen’s future, I decided to lend a helping hand. I grabbed a handful of Boylen’s top quotes from this season and put them in one easily digestible place. Hopefully, this can help speed up the process a bit. You’re welcome!

•   Jim Boylen told the world the Chicago Bulls were a playoff-caliber team before winning only 22 games.

“Our goals for the season are to make the playoffs and every day to prepare like we’re a playoff team.”

•   And despite that playoff proclamation, Boylen told reporters in February he wasn’t worried about how many games the team won. He seems to believe that his job isn’t to win games, but rather to establish a culture. But last time I checked, you need to win games to make the playoffs?

“I’m not worried about my personal record or my win-loss record. I’ve been asked to establish a style of play, to have a disciplined approach and develop a young group of guys. And in my opinion, we are doing that.

It is hard for me. But that’s not my calling. That’s not what they ask me to do. Nobody in this organization said to me, ‘You got to win this many games.’ … Not one time have they said that to me. That doesn’t mean we don’t want to win” (via Westerlund).

•   Boylen doesn’t care about the win-loss record, but he wants the team to win? My head hurts, and it’s about to hurt even more:

•   When Boylen said this quote on February 25th, the Bulls were 20-39 and coming off a stretch where they lost nine of their previous 10 games. The team had no clear identity on the offensive end, and the Bulls defensive rating was questionable at best (their blitz defense forced a lot of turnovers which inflated this number a bit). To say this team established a style of play other than “crappy basketball” is flat-out wrong. Additionally, Boylen relied so heavily on the team’s shot profile in conversation this season, and it was exhausting. Here’s him talking about it again:

“We have areas on the floor that we really value. A rim-2, which is right at the rim in the restricted area, or a corner 3, those are your highest-valued shots. Then you have a mid shot and an above-the-break 3. There are four distinct areas that we talk about. You would like more of the rim-twos and the corner 3s because those are the most valuable shots” (NBC Sports Chicago).

•   Doesn’t it sound like he just learned about advanced analytics and is all excited to show it off? As I wrote numerous times throughout the season, Boylen has blindly followed these numbers. He believed if he just told his team to stick to what the data said is best (corner 3’s and layups) that it’ll eventually work. However, those numbers only say you’ll win games when (1) the talent on the court knows how to efficiently get those shots, and (2) that shot profile fits the type of talent on the court. The coach’s job is still to create a system around his players.

•   Boylen said he wanted to grab 35 assists a night, a feat that has never been accomplished in NBA history (the most assists a team has averaged per game is 31.4). And instead of walking back that bizarre statement when given the chance, Boylen doubled-down:

“I watch the films. I see the open shots we miss. I see the assists we have. I didn’t pull this number out of the air. This is something that I think we can do. I think it’s attainable. I think it’s a statement to how we want to play. If we don’t get 35 and we get 30, that’s still pretty good” (via The Athletic).

•   The tone of Boylen’s coaching is very inconsistent. One day he’s locked-in on the shot profile; the next day he says the win-loss record doesn’t matter. I guess that’s what it looks like to coach by faith.

“I coach by faith. I coach and teach every day on where I think we’re going to be. When that’s going to happen, when that’s going to break through. I’m not sure. But I’m going to keep coaching them that way – teach, we’ll watch this, we’ll learn from it and we’ll grow. We are playing good, hard basketball. We got to win two or three more possessions. Two or three more possessions, one more defensive rebound, one more loose ball, one more open three, we got to make it. That’s the difference in this. And I’m not going to let any negativity deter us from that mission. That’s what we’re going to do” (via Westerlund).

•   The quote above is bonkers in more ways than one, but especially at the end. While he’s trying to say the team is on the cusp of winning basketball games, he also points out multiple things they need to do better. Like so many other quotes from Boylen, it sounds like he doesn’t exactly know what’s wrong. Instead, he continues to hope it’ll all figure itself out.

•   In one of Boylen’s more famous lines from the season, he stated that he never “yanked” guys from games. Of course, it didn’t take long for many Bulls fans and reporters to prove the exact opposite. Not only did he pull the entire lineup at times last season, but he removed Zach LaVine from the game twice this year to try and teach him a lesson.

•   Also, once again, this quote represents Boylen’s 180 from playoff basketball. The guy is talking about developing all 15 of his players by giving them important minutes, which I think we can all agree is 100 percent not how a winning basketball team operates.

•   At one point this season, Boylen begged for someone to take control of the game. Isn’t that kind of his job? I know he can’t physically be on the court, but he needs to manage the game better and put his players in a position to succeed. In other words, he should be taking responsibility.

Reporter: What makes you think the wins will come?

Jim Boylen: "If you build it, they will come." pic.twitter.com/3jJEXAgAKX

•   Here’s a great explanation for why Daniel Gafford didn’t get to play (I’m kidding … it was horrid):

Screw it, I’m stopping there.