Karnisovas' Autonomy, Boylen's Input, Basketball Returns in a Bubble, and Other Bulls Bullets Skip to content 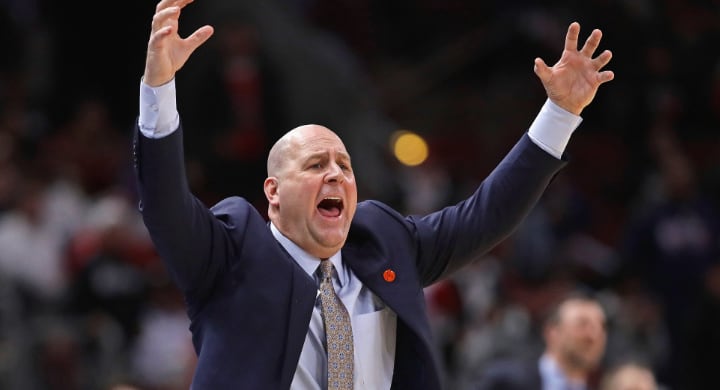 A bird comes to chill on my balcony every morning, so I should probably name it. Suggestions?

•   YOU CAN WATCH NBA BASKETBALL ON YOUR TELEVISION TODAY (@obvious_shirts) The league will play four scrimmage games, all of which will air on NBA TV. However, if you want to catch Wizards-Nuggets or Kings-Heat live and not on tape delay, you’ll have to tune in on NBA League Pass. If you don’t care in the slightest, then NBA TV will air the tape-delayed versions later today. Here’s your schedule:

•   To be frank, most of these matchups stink. But considering we haven’t had NBA basketball since March 11, I’ll happily take whatever I can get. Not to mention, it’s quite likely Joakim Noah will clock some solid minutes in the Clippers-Magic matchup that tips-off at 2:00 p.m. CT … so count me in.

•   Time to write about Jim Boylen already? Ughhhh. Look, there is a world where I can understand why Boylen wasn’t fired immediately and why he hasn’t be fired yet. However, I don’t think there is even a universe where the idea of Boylen remaining as head coach past this offseason is comprehensible. Players don’t like him (Daniel Gafford basically said those exact words), the roster has been mismanaged, and he has a .317 winning percentage. Yet, somehow, each day that passes it begins to feel more likely Boylen’s on the bench to start the 2020-21 season. And that feeling reached a new peak yesterday when NBC Sports Chicago’s K.C. Johnson decided to write the following:

•   To be clear, I’m writing this with no disrespect meant to Johnson. I respect and appreciate all the work he does covering this team. With that said, I’m pretty darn flabbergasted by this newfound defense of Boylen’s job security. To label the team’s hesitation to find a new coach as simply “okay” is passable; to label it as “smart” is … uh … something. Here are the following reasons we’re given for why inaction is the best decision: Ownership likes him. Karnisovas has a lot of time. The start of the 2020-21 season is unknown. Boylen is under contract for two more seasons. A firing would be a hard sell with no revenue coming in and no group activities going on. The official move would start the “clock” on Karnisovas’ tenure. Boylen is collaborative, and Karnisovas is comfortable with some assistant coaches.

•   My rebuttal: The start of next season may be unknown, but that means more time for a quality coaching search and for a new coach to feel comfortable with his team. Boylen is making couch-cushion money compared to other head coaches, so money shouldn’t matter. If Karnisovas is scared to “start the clock” on his tenure – considering that’s what he was hired to do – we have bigger problems. Boylen might be collaborative, but it’s hard to get anything done when your players don’t want to listen to you. If you think the assistants are so good, then so will another head coach. Seriously, I don’t buy any of the reasons above other than (maybe) “Karnisovas has a lot of time.” We’re acting like this is a crime scene investigation where we don’t even know the exact crime committed. Something happened here … it was either murder or jaywalking. The fact of the matter is there is a dead body laying right in front of us with fingerprints all over it and a note that reads: “I did it, here’s my address.” We have enough evidence to know exactly who should be held accountable.

•   Also, Karnisovas is supposed to have full autonomy – and a coaching decision figured to confirm that much – so ownership’s opinion on basketball matters shouldn’t matter. That’s the job Karnisovas was hired to do so non-basketball people weren’t thrust into making those decisions.

•   Meanwhile, Johnson also wrote: “Management has sought Boylen’s input on player development strategies, according to sources. There have been discussions regarding the draft and free agency. Boylen has watched voluntary workouts at the Advocate Center with Karnisovas and Eversley, and they’ve dined together as well.” We’ve heard about the first part before, but I believe this is the first time we’ve gotten word that all of them have watched voluntary workouts together and dined together.

•   Michael Reinsdorf could’ve very well have dropped a nice chunk of change on Karnisovas and Eversley, but also keep in mind that prior the Bulls were one of the smallest (and thus probably least expensive) front offices in the NBA. Now, the team might just be in the “normal” range when it comes to front office payroll:

Do you know how much he paid for Karnisovas and Eversley? https://t.co/uLuozzqoIZ

Firmly keeping my Wendell Carter Jr. stock. This is awesome fluidity for a center and he's just such a sound decision-maker. pic.twitter.com/Ru180vgPVr

•   Another big-time player made his way into the bubble:

Russell Westbrook greeting Coach Mike D’Antoni after clearing quarantine here in Orlando. Russ will practice with the Rockets this morning. When asked if he willl play in Houston’s scrimmage Friday, he said : “Honestly, I have to see if I can make a layup – let’s start there.” pic.twitter.com/KvwHcIwTi4

The Jordan Logo Will Appear on All Statement Edition Jerseys Next Season (Yes, That Means the Pistons)https://t.co/bOlR2NwQ2G