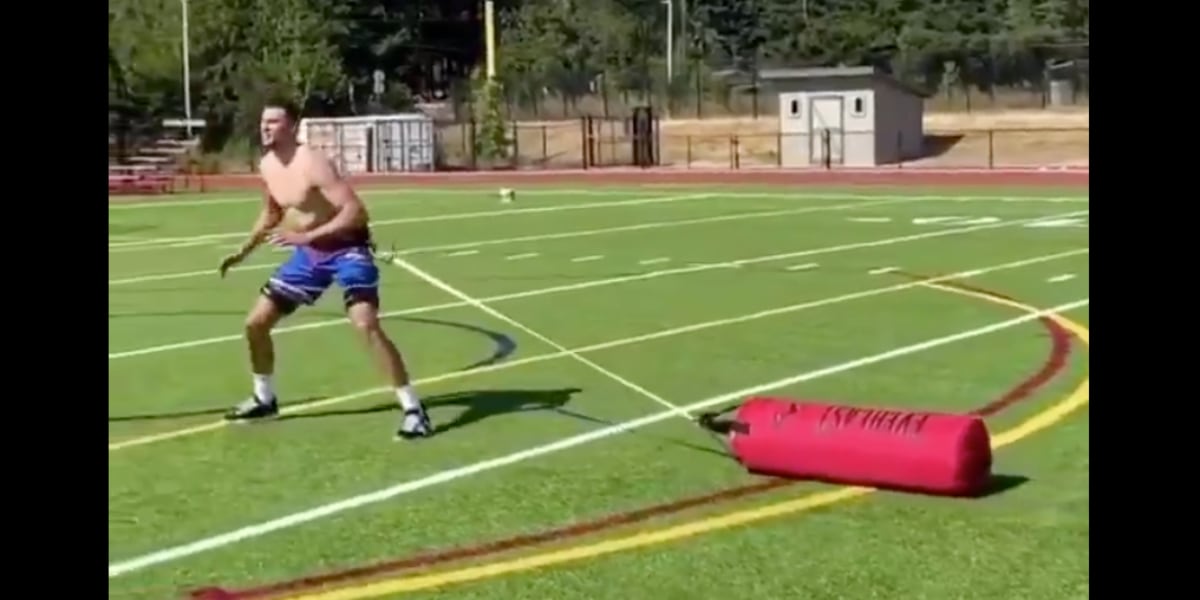 You know it’s the offseason when we get a video of a shirtless Zach LaVine doing something ridiculously athletic! Our latest clip comes via LaVine’s Instagram story, where he shared footage of himself dragging a weight bag around like it’s a blueberry tied to a string.

I mean, just look at this absolute unit:

While any player can look like a beast over social media, LaVine always finds a way to take it to another level.

His hardcore work ethic probably shouldn’t come as a surprise, though, especially when we consider with whom he works behind the scenes. Drew Hanlen is a private basketball coach who trains some of the biggest stars in today’s game, including Joel Embiid, Bradley Beal, and Jayson Tatum (just to name a few). Since well before his days in the NBA, LaVine has worked closely with Hanlen, and the trainer recently opened up about LaVine’s constant grind on The Ryen Russillo Podcast.

“There is no one that is going to outwork him … I think he’s the No. 1 option just because I’ve seen how gifted he is. I mean, guys don’t score 26.5 points per game shooting the numbers that he shoots. We just think he has to take a step forward in the playmaking category, and then he has to take a step forward on the defensive effort. And once he does those things, I think you’ll see one of the best well-rounded players around the league.”

I know it’s in Hanlen’s best interest to talk up his clients, but the guy knows elite talent when he sees it. And in his conversation with Russillo, he made sure to reference LaVine’s season-by-season improvement, something that I think all Bulls fans can vouch for over at least the last three years. So while he may not have found his way onto an All-Star roster yet, the dedication from LaVine and the confidence from Hanlen is still sky-high.

Anyway, thanks to LaVine for continuing to give Bulls fans something to be excited about! More videos, please!