Zach LaVine Knows He Must (And Can!) Get to the Free Throw Line More Often | Bleacher Nation Skip to content 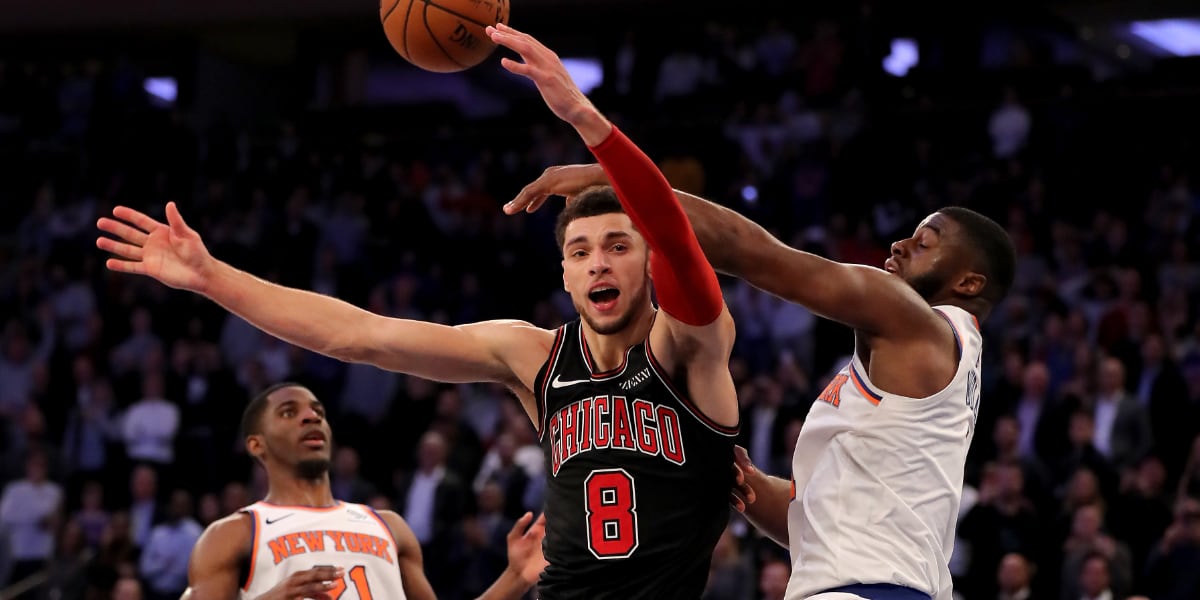 Zach LaVine wants to be an All-Star. You know it. I know it. He knows it.

As one of the more athletic players in the entire NBA, LaVine has the craftiness and speed to beat defenders to the hoop time and again. The problem is, when he’s on his way toward the rim, he too often forgets the perks of drawing a foul. But don’t take my word for it, take his.

In an interview with Ekam Nagra of Ball Don’t Stop back in July, LaVine talked about adding elements to his game each offseason, and a recent focus for the 26-year-old is improving his ability to draw fouls.

“Offensively for me, it’s creating fouls. It’s probably the biggest thing about the NBA game right now. I averaged 25, 26 and I went to the free-throw line four times. If I can get that around eight, you know. [It’s] learning how to create the fouls, and create body contact. Because sometimes I try to go in and make the layup, or go into the air and avoid them, sometimes you got to put your head down and go through somebody.”

LaVine admitted that sometimes he’s too keen on making the bucket. And while that should usually be the goal, he’s right in saying that sometimes drawing contact can prove even more beneficial overall. He pointed toward James Harden, Bradley Beal, and Luka Doncic as three players who pose an elite ability to recognize the moment and get to the line (by the way, if those are the players on which he decided to watch some extra film this offseason, color me a happy camper).

The difference between him and some of the other elite wing players when it comes to drawing shooting fouls is pretty evident. On the season, LaVine averaged 5.6 attempts per game, which ranked 27th in the league.

For reference, here is how often some other high-volume scoring guards got to the line:

Look, some of these guys are just very different players. LaVine is far more capable of shooting the 3-ball than Jimmy Butler, and therefore that shot can more frequently prove to be a better option. Russell Westbrook is another player who is far better at attacking the basket than he is shooting along the perimeter. But if guys like Beal and Booker can fight to be top-10 in FTAs per game, I think it’s fair to say LaVine can too.

While on the court, LaVine’s shooting foul percentage (the percent of shots a player is fouled on) is 10.9 percent, which can be found only in the 77th percentile of NBA players, per Cleaning the Glass. Beal checks in at 13.4 percent (88th) and Booker at 13.1 (84th). Again, players like Butler (24.8%), Fox (17.8%), and Doncic (17.5%) are probably always going to be better in this category because of the frequency in which they’re driving to the hoop. Still, for a player who we know can get to the rim like that *snaps fingers,* we probably don’t want to see him sandwiched between Jordan Clarkson and Elie Okobo in shooting foul percentage (to be absolutely transparent, though, Damian Lillard is in the 78th percentile and only .4 percent better than LaVine, but that’s also freakin’ Dame Time we’re talking about, and Dame Time has the right to do whatever he wants).

Again, we all know he has the explosiveness to beat a defender on the first step and get toward the basket. LaVine just needs to better recognize when he should try to fight his way to line – or as he said in that interview from July “trying to make that decision, okay, almost f*#k the layup, I might have to get fouled.”

Chances are, he knows that if he can get to the line consistently, he can take more control of the game. I probably don’t need to write this, but the Bulls were in a lot of games last season … until they weren’t. The head coach had a lot to do with that, but so did the inexperience of the roster, and the team’s inability to control the pace of play. If LaVine can prove to get to the line more consistently, he can help slow down the game for some of the teammates. No, this will not single-handedly win the team a bunch more games, but it certainly won’t hurt. After all, the Bulls played in the 4th-most clutch games this regular season, and a good way to gain, regain, or expand a lead in those situations is by having a player who knows how to get some freebie buckets.

Also, it’s not like we haven’t seen him flash his ability to do this in big-time situations before. LaVine has had two game-winning drives to the hoops against playoff teams in recent history:

I don’t think more free throws will push LaVine over the superstar ledge (not by any means), but it could prove helpful in partially changing the “losing player” narrative that surrounds him. Also, in general, more trips to line rarely hurts.