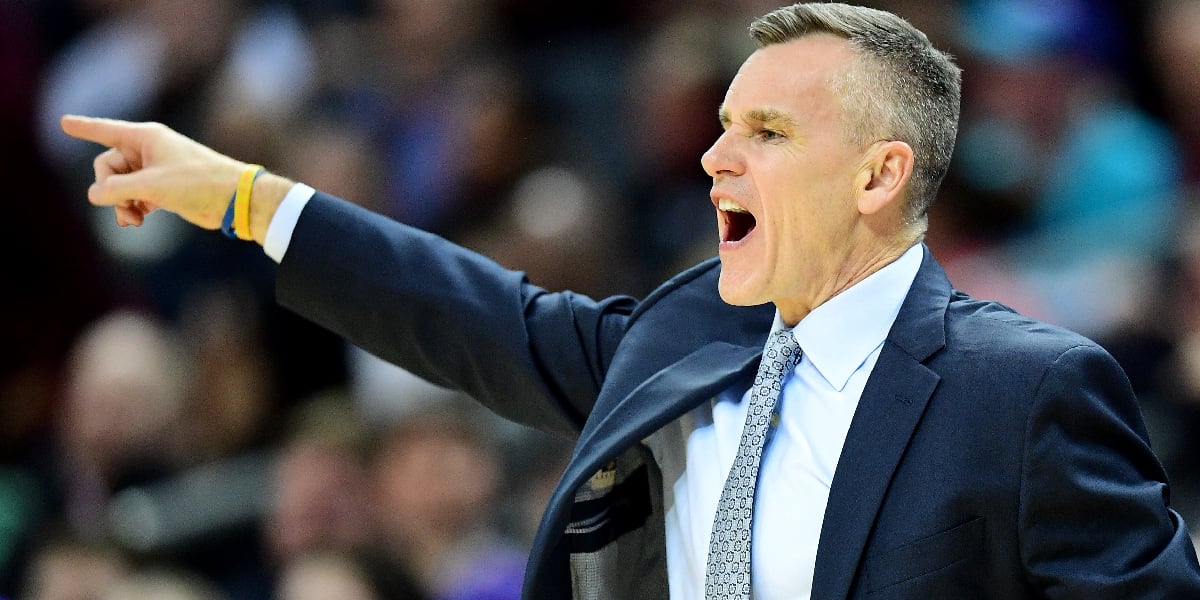 In an unexpected annoucenment on Tuesday afternoon, the Chicago Bulls revealed that Billy Donovan is the team’s next head coach.

Adrian Wojnarowski has more details on the agreement in his full article right here, including the fact that Arturas Karnisovas “aggressively pursued Donovan in the aftermath of Donovan’s leaving the Oklahoma City Thunder after five seasons …. selling Donovan on a partnership and vision for a talented young roster and chance to lead one of the league’s anchor franchises.”

Here’s the statement from the Bulls (via Karnisovas):

“We are very pleased to welcome Billy and his family to the Chicago Bulls. The success that he has sustained over the course of his coaching career puts him on a different level,” said Chicago Bulls Executive Vice President – Basketball Operations Arturas Karnisovas. “We feel his ability to help his players reach their potential, both individually and collectively, will mesh well with our roster. Whether as a player or as a coach, he has won everywhere his career has taken him, and we hope that will continue here in Chicago.”

And here’s what Donovan had to say, himself:

“I want to thank Jerry, Michael, Arturas and Marc for the opportunity to coach the Chicago Bulls. I also want to thank them for the time and effort they put into this hiring process. I’m excited to partner with Arturas as we work together on behalf of this historic franchise,” said Billy Donovan.

The news comes only a couple of weeks after Donovan decided to walk away from the Oklahoma City Thunder. Rumor has it that while the two sides ended their stint together on good terms, their future image for the organization didn’t necessarily align. With that being the case, it’s pretty damn shocking that Donovan agreed to join a franchise that’s still in the midst of a rebuild, especially after it was assumed that other, more win-now teams would come calling his name.

I suppose this is just an example of new leader Arturas Karnisovas working his magic, though, as Wojnarowski reported that the Bulls pursued Donovan heavily after he became available. Anyway, we’ll update you accordingly.

When it comes to NBA experience, Billy Donovan has six seasons under his belt – five season as head coach of the Oklahoma City Thunder (2015-2020) and one season as a player with the New York Knicks (1987-88). All things considered, that doesn’t exactly sound like enough to be considered (arguably) the top coaching prospect on the market. However, Donovan’s recent run with the Oklahoma City Thunder demonstrated that he’s more than capable of leading a winning organization. Through his first four seasons with the team, the Thunder won 48 or more games. Then, even with the loss of Russell Westbrook and the Paul George this past offseason, Donovan led OKC to 44 wins and the 5th-seed in the Western Conference – a feat few expected at the start of the season. Overall, as an NBA head coach, he has compiled a 60.8 winning percentage.

Before his time in Oklahoma City, Donovan dominated the college coaching ranks. After a successful stint as an assistant coach in Kentucky, he became the youngest head coach in the NCAA when he accepted a job to lead the Marshall Thundering Herd. His work there caught the attention of the University of Flordia, and Donovan joined the Gators in 1996. The rest is legitimately history.

Donovan became one of the best coaches in college basketball, bolstering the Gators’ recruiting efforts and turning them into a constant title competitor. Over his 19 years with the program, the Gators won six SEC championships, made four Final Four appearances, and appeared in the NCAA title game three times, winning two-straight in 2006 and 2007. He also won SEC Coach of the Year three times, achieved the No. 1 ranking in the country five times, and made the postseason 17 straight times (look at the Gators website for more). Oh, he also had a 71 percent winning percentage. Simply put, the guy is an NCAA coaching legend, and it’s no surprise he eventually found his way into the NBA.

Over his time with the Gators and Thunder, he coached players like Joakim Noah, Al Horford, Bradley Beal, Kevin Durant, Russell Westbrook, Paul George, and Chris Paul. In other words, not only does he know what an elite player looks like, he’s helped players reach that elite status. Nice and Nice.

With that said, not everything is peachy with Donovan. The Mutual respect he has for players has arguably been one of his downfalls. During the days of Russell Westbrook and Co., it was clear that Donovan was content letting him run the show, which is something that came back to bite the team at times. Additionally, we didn’t necessarily see any advanced offensive system in OKC, despite that being a strength of his at the college level. On a team with no superstars like the Bulls, Donovan would have to tap back into that part of his basketball brain to find success.

When it comes down to it, though, Donovan is a true professional. If the Bulls were to hire him, he would immediately add a comfortable, player-friendly culture to the organization. The biggest question would probably be how much does he move the needle in the long run? I know he is Phil Jackson compared to Jim Boylen, so it’s probably not worth asking that question right now, but I’d say it’s at least something to think about after four straight first-round exits with some solid Thunder rosters.