Pacers All-Star Victor Oladipo Reportedly Wants Out, But Would the Bulls Really Make Any Sense? Skip to content 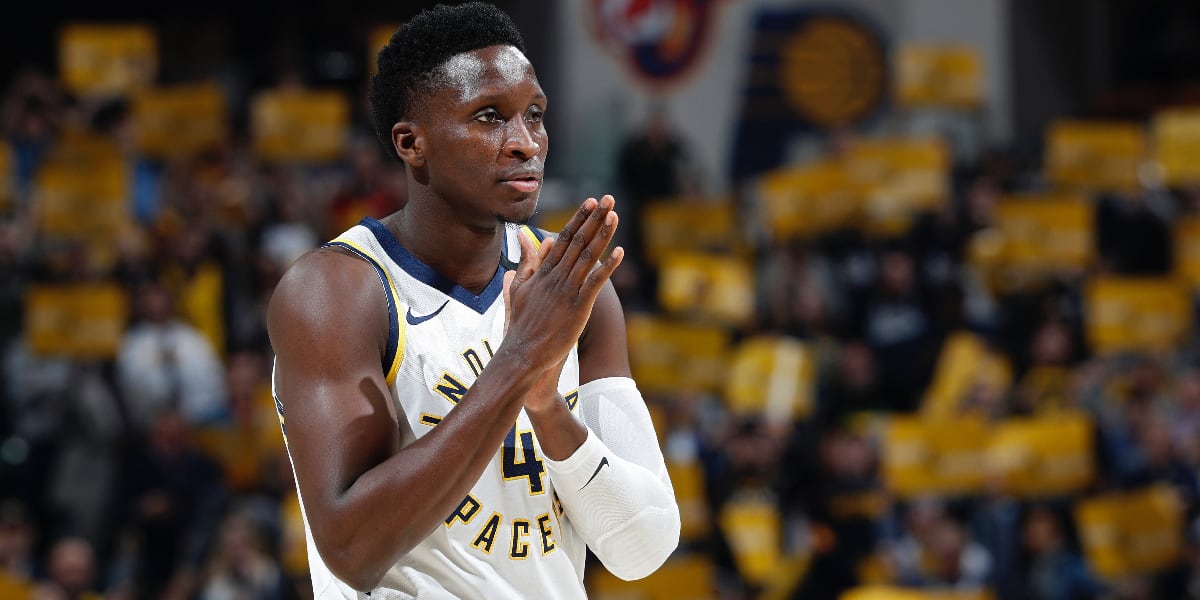 As the Finals cap off the 2019-20 season over the next couple of weeks, some big NBA offseason storylines will start to come out of the woodwork, and one of those storylines is already dominating NBA Twitter.

According to The Athletic’s Jared Weiss, Pacers guard Victor Oladipo wants out of Indiana. Weiss dropped the update while pitching a possible trade package that he believes could involve Boston’s Gordon Hayward.

Indiana is still home for the Haywards, and with Victor Oladipo looking to move on this offseason, according to sources, and Myles Turner possibly in the same boat, there could be an opportunity for Ainge to move Hayward and the abundance of draft picks in his war chest in a mutually agreeable way.

A 2x NBA All-Star, Oladipo, 28, is heading into the last season of a four-year $85 million contract. Throughout last season, questions started to swirl about whether or not Oladipo would want to commit longterm to Indiana, and vice versa. Not only has there been a recent rise from Domantas Sabonis and Malcolm Brogdon, but Oladipo has struggled to stay on the court. On January 23rd, 2019, the guard suffered a ruptured quad tendon in his right knee, and he wouldn’t return until a little over one year later. Upon his return, Oladipo failed to look like his old self, but he did show some signs of life with three-straight 20-plus-point performances during the Pacers’ recent playoffs appearance in Orlando.

While it’s hard to know exactly what to expect from Oladipo moving forward, he’s still a relatively young player with a ton of upside. The guy is a strong two-way talent who has demonstrated the ability to be the best player on a playoff team. His career-best season came in 2017-18 when he averaged 23.1 points, 5.2 rebounds, 4,3 assists, and 2.4 steals per game. With the right system and trainers around him, there is certainly reason to believe Oladipo can quickly reach his All-Star-caliber play once again.

As far as the NBA community knows, the Pacers haven’t made any sort of commitment to Oladipo. Talks on an extension could surface over the next couple of months, but it seems far more likely Oladipo will sit down with president of basketball operations Kevin Pritchard and ask for a trade. Oladipo would immediately become one of the more intriguing names available, free agency included. For what it’s worth, the Miami Heat have been the team most frequently linked to Oladipo in the past, but it has primarily been speculation.

I’m sure we’ll get plenty more rumors on Oladipo over the next couple of months, but the question I have to try to answer is whether or not the Bulls should be a part of those rumors. In short, my answer is a somewhat confident “nah.” If Montrezl Harrell feels like too big of a splash this offseason for the Bulls, then a trade for Oladipo feels like a tidal wave. Not only do I think another team could pose a somewhat more intriguing offer, but it’s not very easy to come up with a realistic trade for Chicago. LaVine and Porter would be the only money that easily works. However, if you’re the Bulls, this doesn’t feel like the right deal in which to include LaVine. And, if you’re the Pacers, accepting an expiring, injury-riddled Porter in return would basically be like “dumping” Oladipo, which makes little sense. A package revolved around a young core member and Sato/Thad could be a talking point, but it all feels too complicated (and perhaps too big of a swing so early in the tenure of Arturas Karnisovas).

The Bulls just aren’t in a position where this makes a lot of sense. Oladipo is a win-ready player who is on an expiring deal, and he should go to a team that’s ready to compete. If the Bulls made the move, it would most likely mean they wanted to give him an extension, but is he really the guy the franchise wants to invest in from the coveted 2021 free agency? My guess is they’re dreaming a little bigger right now, and that’s a good thing.

Again, I like Oladipo, and if Karnisovas somehow pulled off a fun trade for him, I probably wouldn’t complain. At the end of the day, though, it’s hard to see a road where the Bulls and Oladipo cross paths.