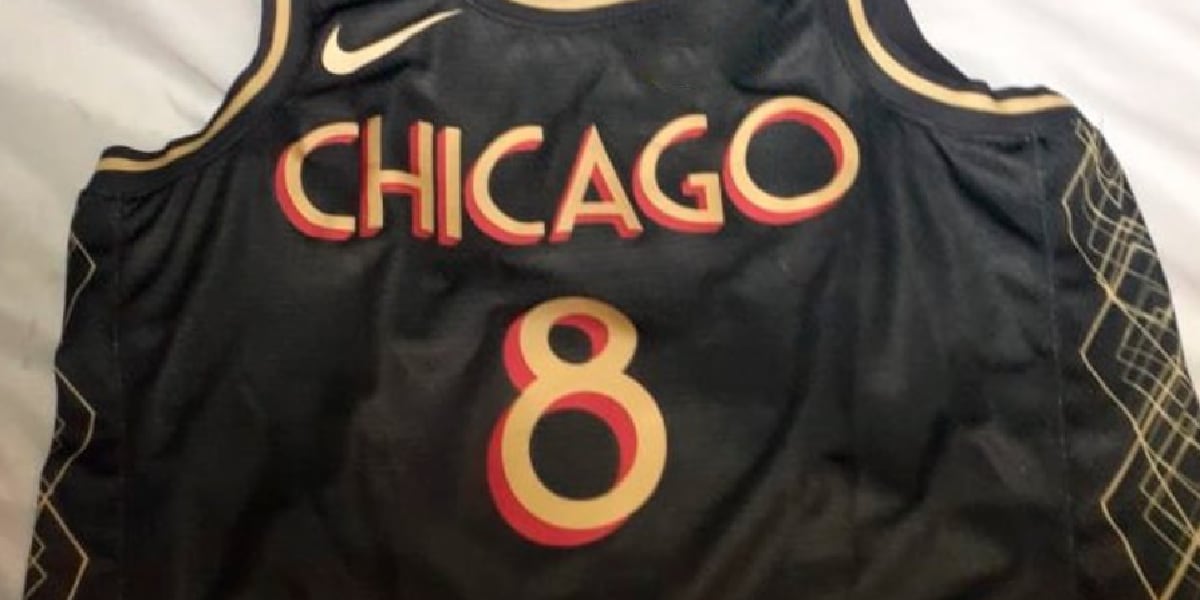 This week is going to be … uh … interesting. I’m doing my best to stay positive and calm, and I hope you’re doing the same. Also, please remember to vote either today or tomorrow!

•   You wouldn’t guess by looking at it, but the Chicago Bulls new city edition jersey has reportedly leaked online.

•   There has yet to be a confirmation on whether or not these threads will be the Bulls new look in 2020-21, but that hasn’t stopped fans from sharing their opinion. The jersey itself offers almost nothing that resembles the traditional Bulls look. While there are hints of red, the color scheme is entirely off, and neither the logo nor the team name can be seen displayed anywhere. The city edition jersey does offer an opportunity to try out something new and adventurous, though, which can be made evident by revisiting the team’s powder blue uni’s last season. Also, with a deeper look, it’s not like this new jersey doesn’t have hints of Chicago all over it.

•   Rob Schaefer of NBC Sports Chicago dug into the jersey’s details and made several interesting connections – the most important of which is the font we see the word “Chicago” written in. Centered across the chest, it can be inferred that the city’s name is meant to appear similar to that of the Chicago Theater marquee. In 2021, the Theater will celebrate its 100th anniversary, so recognizing the famous landmark at the United Center makes plenty of sense. Schaefer goes on to point out some apparent art-deco ties, and he also connects the phrase “no little plans” (seen at the bottom of the jersey) back to American architect Daniel Burnham, who left a major impact on the Windy City. For more information, make sure to read Schaefer’s piece.

•   I’ll admit the jersey doesn’t give me goosebumps, but I respect the idea behind it. The Chicago Theater has always been one of my favorite city staples. Whether it be seeing musicals around the holidays or watching John Mulaney record his Netflix special, I’ve made memories inside those walls year after year. Damn. Now, I’m all up in my feelings. I hate this pandemic, man. I want to go to a show.

•   ICYMI: Bulls head coach Billy Donovan has hired HOF player Maurice Cheeks to the Bulls coaching staff. Considering the two worked together each of Donovan’s seasons in Oklahoma City, many speculated it was only a matter of time before Cheeks joined the Bulls. In addition to Cheeks, news also dropped on Monday that the Bulls have hired assistant coach Josh Longstaff away from the Milwaukee Bucks.

•   While expected, I think we have several reasons to be excited about this Cheeks hire. His time as an NBA head coach may not have been the most successful, but he’s still a widely respected basketball mind with an incredible amount of experience. All things considered, the Bulls are now a pretty young organization. Arturas Karnisovas and Marc Eversley are in the No. 1 and No. 2 position, respectively, for the first time in their career. Cheeks isn’t about to have some kind of influence over the decision making, but it rarely hurts to have someone with his expertise inside the organization. The guy has been in the NBA since 1978, and that should be a valuable presence to have inside the Advocate Center.

•   The Athletic ranked point guards that will be available on the upcoming free-agent market. With rumors swirling about the Bulls interest in adding a true facilitator at the position, we need to take into consideration who might be within the Bulls price range over the next couple of months, particularly if they don’t add a guard on draft night. Chicago has the Mid-Level Exception at this disposal, and John Hollinger lists guys like Trey Burke, Reggie Jackson, DJ Augustin, and Chris Chiozza (among others) as names that will likely cost less than the entire MLE but more than the minimum. Could guys like this spark Karnisovas’ interest?

•   I guess the combine numbers aren’t all that interesting …

Think it’s going to be hard to compare 2020 numbers to past iterations of the combine and gain any degree of insight w/ confidence. That’s why I’m not really discussing or reporting any of them that I’ve gotten or seen posted publicly by others. Just have some real contextual ?s