When Should We Expect Bulls Trades and Who's *Really* on the Table? Skip to content 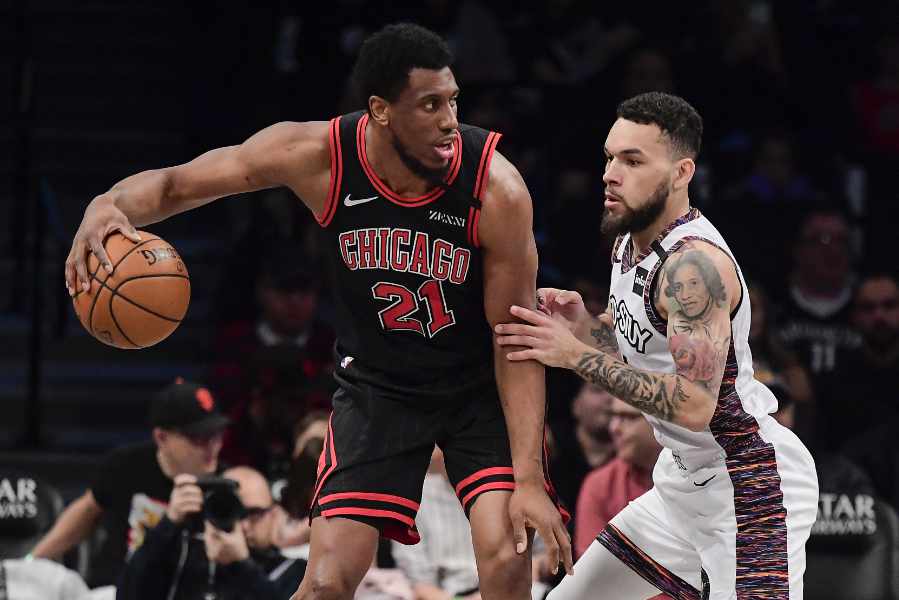 Chicago’s free agency was about as exciting as watching the 2000-2001 Bulls. Arturas Karnisovas brought only one new face on board, signing veteran guard Garrett Temple to a one-year, $5 million contract (who might as well have played for the 2000-01 joke #OldManJoke). As uneventful as the past few days have been for us, however, we can’t be too surprised. The organization had a roster already jam-packed with guaranteed contracts and only the mid-level/biannual exception to spend.

I suppose there is still a chance the team opts to buy-out players like Cristiano Felicio or Luke Kornet to make room for another available free agent, but the chances of that happening become increasingly unlikely as the days go by. Instead, it’s starting to feel like any other roster shake-up for this team in the short-term will have to come via trade. While we have received no legitimate trade rumor between the Bulls and a suitor this offseason, we have been given reason to believe one could happen. The Bulls have been lumped into the “most active”‘ conversation, and we do know other organizations have called the Bulls about the availability of Zach LaVine.

Let’s start with the latter …

I think it’s merely a fact that nobody on this Bulls roster is off the table. With the exception of rookie Patrick Williams and Temple, the new front office has no connection to any of the current talent. Zach LaVine isn’t their guy, Lauri Markkanen isn’t their guy, Wendell Carter Jr. isn’t their guy, and so on. I know it may sound harsh, but that fact alone (combined with the team’s horrid winning percentage) means we should consider basically this whole roster available. Now, of course, this doesn’t mean Karnisovas will trade everyone away, either. GM Marc Eversley did tell fans that he expects a “retooling” and not a rebuild. What that means is that this front office believes at least some of the current roster members are part of the long-term plan.

We also have to consider whether or not the Bulls can trade everyone. We often fall into a trap of blindly considering young talent as particularly valuable. I do it too. However, we have to remember that if we don’t value (for example) Lauri Markkanen highly then it’s probably the same for most organizations. I know that sounds kind of obvious, but I have to remind myself of that point all the time. It’s easy to want a trade, but it’s hard to find a worthwhile return, especially when that talent either (1) had a massive down year like Markkanen or (2) has been injury-riddled like Wendell Carter Jr. The fact is both could still prove to provide a far better output than what a trade return would net.

Anyway, rather than explore the several other roster members, I’m just going to jump to the players who I believe have the best shot at being traded (and I bet they’re whom you expected): Thaddeus Young, Tomas Satoransky, and Otto Porter. As three of the oldest players on the roster, as well as decently respected role-players, the Bulls probably should actively search for trade partners on all three. The future surely does not rely on any one of these guys, and if a contender wants to provide the organization with a couple more assets or young pieces, the Bulls should jump at the opportunity (not to mention, just getting Young or Sato off the books could help open up more space in 2021 free agency).

Young, specifically, feels like the most likely to be traded. He is still a starting-caliber big man who could offer some great veteran experience and all-around play to any contender. The Athletic’s Darnell Mayberry also brought up a great point in a recent article when discussing the addition of the Bulls No. 4 draft pick.

Meanwhile, trade rumors have swirled around Young for months, and multiple league insiders view a deal for the versatile power forward as inevitable. Williams’ arrival certainly lends credence to that speculation. Unless the Bulls want Williams, 19, to be groomed slowly and learn from the bench, a move almost has to be made to free minutes for the team’s fourth overall draft pick.

Porter, on the other hand, will have to prove his worth again. Once viewed as a top 3-and-D forward in the NBA, Porter could have significant value if he were to stay healthy throughout the course of the season. His salary may be a tad large ($28.5 million), but I have little doubt a competitive team would send the Bulls a solid haul for a healthy Porter around the trade deadline.

Satoransky has the highest likelihood of finishing out his contract with the Bulls, in my opinion. I’m sure Chicago wouldn’t hesitate to throw him into a sexy deal if need be, but he does offer the kind of versatile skillset Billy Donovan and the new front office love. Not to mention, the Bulls did not make a move for a point guard this offseason, so it could tell us they feel more confident than we initially anticipated in Satoransky’s capabilities.

As for the question about when to expect a trade, I’m leaning toward this season’s deadline. Training camp starts on December 1st, and we know this organization likes to evaluate talent before making big decisions. I’m afraid a two-week mini-camp after months away from the court wasn’t enough to give this front office the information they needed. Anything can happen, but I have to imagine this team enters the season as currently constructed. Then, some of the roster overhaul we want to see will begin to take shape in the coming months.