Honest Donovan, Did You See Patrick Williams? Thibs is back, and Other Bulls Bullets Skip to content 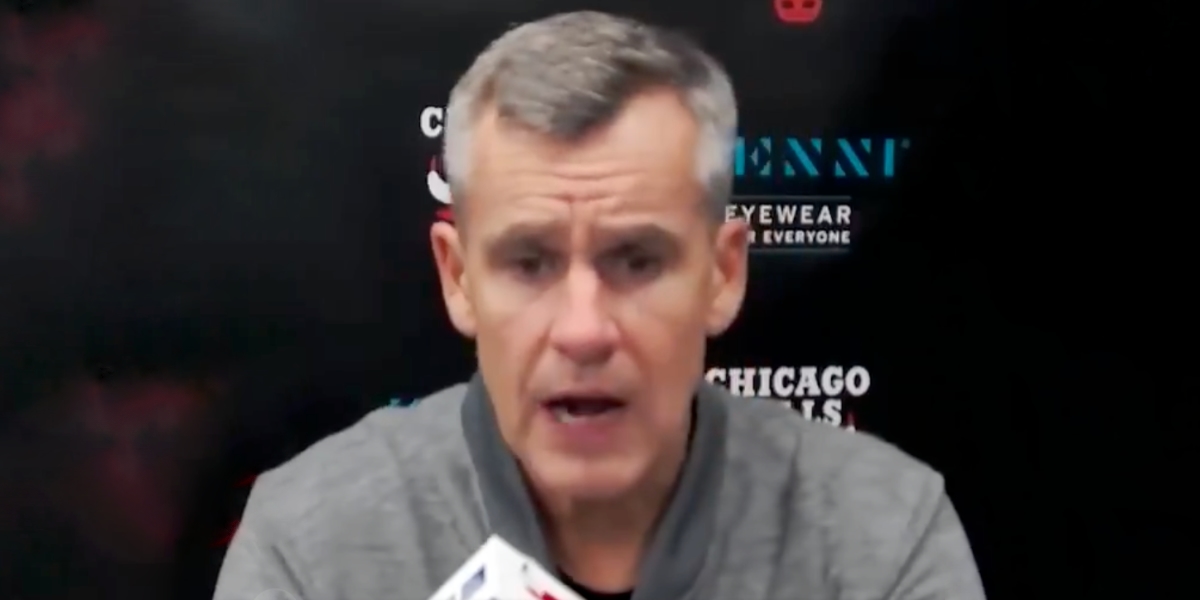 Today full of holiday cheer. On the agenda: Wrapping presents, building a gingerbread house, watching movies, and drinking boozy egg nog. This may be surprising, but I’ve actually never tried egg nog, so I’m pretty scared. The concept of it seems damn gross to me, but I guess that’s what the alcohol is for, right? We’ll see.

•   If you missed the Bulls first preseason game last night, don’t worry, Billy Donovan will tell you how it went …

•   For more information, you can also check out our postgame thoughts here. But Donovan truly gave the best summary – the Bulls got their ass kicked in. Look, this team hasn’t played a competitive contest in nine months. I’ve seen a couple of folks here and there say things like, “John Wall hasn’t played in two years” and “Boogie Cousins looked fine.” Well, despite Wall’s injury trouble, he is still a six-time All-Star. As for Cousins, he’s a five-star All-Star. Combine that kind of veteran experience with a roster that did play in the Orlando bubble, and they’re bound to have a little more firepower than one of the youngest teams in the NBA who’s also in the midst of learning a new system.

•   Also, let’s remember this Bulls team has had less than a week of group workouts. Billy Donovan has only had his full squad to work with since last Sunday, and I think it’s safe to say that’s not enough time to implement a style of play that is the exact opposite of what this team did last season. Donovan basically admitted in his postgame press conference that the team wasn’t super focused on the specific matchup, too. He took responsibility for the lackluster defense that allowed the Rockets to score 30+ points in three-straight quarters. Fine with me. Teams should be more invested in themselves right now.

•   With that said, they play this same team on Sunday, and we should expect the coaching staff to adjust accordingly. Donovan said the game offered plenty of teachable moments, so I’m curious to see (1) how fast this coaching staff can teach and (2) how fast this roster can learn. Speaking of fast learners … did y’all see Patrick Williams!?

•   The rookie was easily the bright spot for this Bulls team last night. Donovan threw him into the fire, and the 19-year-old fit right in. He flashed his quick feet on defense and his smooth stroke on offense. Sure, a 12-point and 3-rebound performance is nothing too sexy, but Williams looked the part. Considering he was drafted less than a month ago, had no summer league, and only four days of group workouts, that’s very encouraging.

Coach on Patrick Williams: “I think he’s got a chance to be a really good player… He rarely forces shots, makes good decisions, is a good passer. I thought he played very well considering there was no summer league and he had to come in and just get started in Training Camp.” pic.twitter.com/wD0KccDwy7

•   Most other players on the Bulls, unfortunately, didn’t look as comfortable as Williams. Several players were overthinking the team’s motion-offense at times, including new starting point guard Coby White. The Bulls started all sorts of out-of-sync in the first quarter, and White couldn’t do much to keep his team from falling into a 24-9 hole. He might have finished with 15 points and 6 assists in just 23 minutes of action (which is certainly workable), but he still has to find the right balance. And White knows it: “If I had to give it 1 to 10, I’d say 3 or 4. Struggled a little bit, but I ain’t hooped in nine months. New front office, new everything so trying to give myself some grace. But feel like I could’ve played a lot better.” NBC Sports Chicago’s K.C. Johnson has a lot more on White’s first game at lead guard. Give it a read.

Coby White didn’t hesitate when asked to assess his first preseason game as starting PG. He also has high standards for himself, offensively and defensively.

•   Lauri Markkanen showed some very promising flashes last night. Here one of them:

•   Something Markkanen didn’t do is get to the free throw line, but the rest of the Bulls surprisingly did that for him. The team shot 37 free throw attempts compared to the Rockets 21. Chandler Hutchison did a great job of attacking the basket when he was on the court and checked off nine of those attempts. Training camp invite Noah Vonleh also got himself nine freebies, knocking down six. The Bulls will be relying on a lot of cutting this upcoming season, so it’s promising to see this already lead to a boost in trips to the line. Remember, Chicgo finished 27th-overall in FTA’s per game last season.