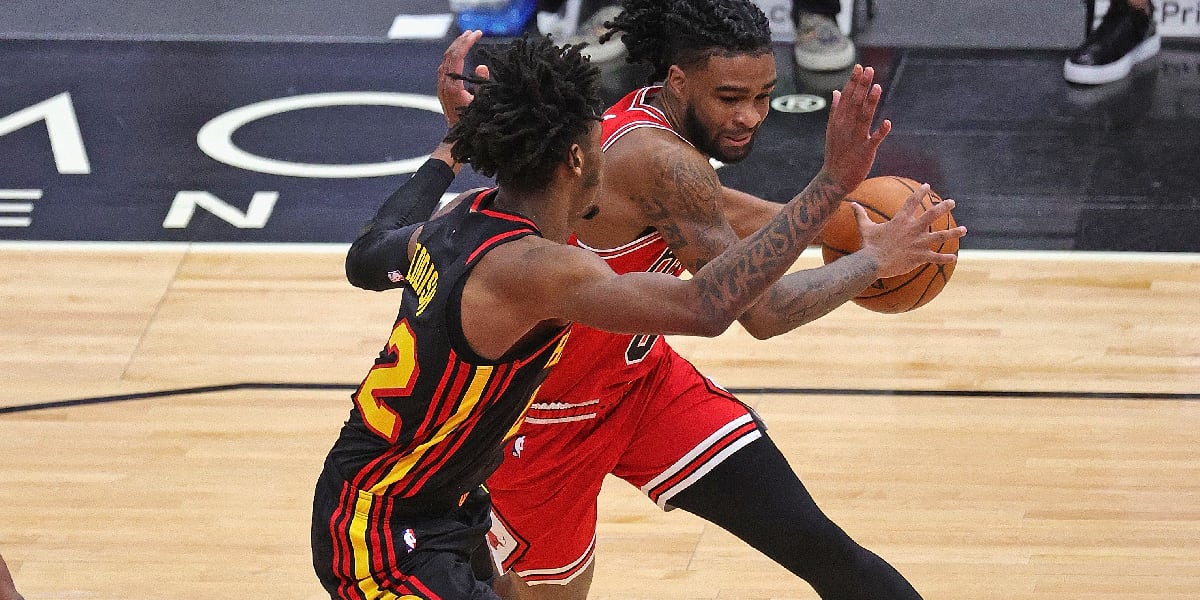 One of the best presents I’ve already gotten this Holiday season is that Bulls basketball is back in my life! *touches earpiece* What’s that? Mhhm. They lost by 20 to the Hawks last night!? And they were once down 40!? Lauri had a good game? What about Coby? OH COME ON!

•   What do you want first: the good news or the bad news? Bad news? Me too. After a 124-104 loss to the Atlanta Hawks, the Chicago Bulls schedule doesn’t get any easier. Instead, the team must play the Indiana Pacers followed by the Warriors, Wizards (x2), and a gauntlet that features the Bucks, Mavs, Trail Blazers, Lakers, and Clippers over the next couple of weeks. In other words, while the Hawks are certainly an improved team this season, that was arguably one of the more winnable games on the near-term slate. An argument can be made that the Wizards are the most suitable opponent, but I’m all kinds of concerned about the Bulls backcourt trying to control Bradley Beal and Russell Westbrook, especially after allowing Trae Young to go off for 37 points last night.

•   The other bad news is that the Bulls don’t just have a couple of things they need to tweak, but rather five handfuls of things they need to tear apart, dissect, and build back up. What proved to be a somewhat dynamic offensive approach in the preseason fell flatter than an open Coca Cola can that’s been in the car for a week. Not only did the team kind of revert to ISO ball when the going got tough, but practically no one looked to be on the same page when the team was trying run the designed plays. The simple fact of the matter is, this team needs to pass the ball well to even averagely perform this kind of motion offense. Instead, they finished with 20 team assists, the lowest since their first preseason game against the Houston Rockets. And, believe it or not, the Bulls lost that game with an eerily similar score of 125-104.

•   Sure, it also doesn’t help that players weren’t hitting their open shots. The team finished the night with only a 22.9 percent clip (8-35) from downtown, and half of those made 3’s came from the same player (Markkanen). Meanwhile, combined, Coby White and Zach LaVine shot 2-15 behind the arc. LaVine at least salvaged his game with a 9-19 performance from the field, but White looked completely discombobulated as he shot his way through a 2-11 night. Yeah, so when the backcourt plays like that, this team isn’t going to win games.

•   Wendell Carter Jr. also did himself no favors with a 6-point, 6-rebound performance. The big man played only 26 minutes of action, and he turned the ball over 3 times in that span. He did not look like the “different” Wendell on the offensive end that we were sold this offseason, and he also didn’t look like this team’s defensive anchor, which he has at least been able to consistently do in the past. With that said, I’m not throwing in the towel on Carter Jr.’s massive upside in this new system. Many folks who follow the Bulls have agreed he could benefit the most from Donovan’s coaching, but what we have to keep in mind is that also means he will experience the most change, and we all know change takes time. Put more accurately, learning an entirely new role takes time. The Bulls do need a lot more from him as soon as next game, but I’m willing to give him a little more slack than others.

•   The big man also told the media after the game that he apologized for his poor play in the locker room.

•   I love when a player can fall flat into a muddy Chicago snowbank and own it. But what I want to know now is what will he do to make sure he doesn’t have to apologize again? I mean, effort is also kind of a you thing, right? The only person that can truly help Carter Jr. not get into his own head is himself. The third-year player said last night that he has struggled with this concept: “When I work on a certain craft for a very long time, to see that ball just not fall, bounce around the rim, in and outs, I tend to get down on myself.” He said that he explained to Billy Donovan that this is an attribute he’s trying to shake. Hopefully, that happens sooner than later.

•   Another player who owned up to his mistakes:

Coby White: "I didn’t lead us well enough to give us a chance to win. Back to the drawing board, learn from it, take it how it is and continue to get better. We’ve got 71 more. I’m looking forward to Saturday. We’re going to be ready on Saturday for sure.” pic.twitter.com/hcL39rI1MM

•   White was not going to become the leader this team needs over just four preseason games. However, I’ll still be the first to admit last night was a concerning showing. He must look more comfortable this weekend.

Billy Donovan on Coby White: "As I was trying to explain to him during the course of the game, we’re coming down the floor and guys don’t know necessarily what we’re in at that moment in time even though we’re trying to play fast. I think that’s part of his learning curve."

•   Speaking of which, being uncomfortable and overthinking everything seemed to be the two main themes from last night. The team had a similar problem in their first preseason game against the Rockets, and they managed bounced back pretty strong. I can only hope they manage to do the same against the Pacers because my antsy, angry tweeting fingers will be at the ready.

•   Oh crap. Silly me. I forgot all about the good news! Since there was considerably less of that, let me just list some things off: It’s only one game; Lauri Markkanen had his best showing in quite some time (21 points, 7 rebounds, 4 made 3’s); it’s only one game; Patrick Williams got the start, and looked pretty damn good (16 points, 4 rebounds, 5-6 from the line); Zach LaVine still dropped 22 points; it’s only one game; the Bulls didn’t lose the turnover battle even though they played very sloppy; Chicago also outscored Atlanta 29-16 on points off turnovers; it’s only one game. Hm. Ok. I think that’s it.

•   Anyway, here is a thread of me trying to convince myself everything is ok. Until Saturday!

I know it sounds cliche to say, but it's a process. And as weird as it seems, a game like this is part of that process. Not necessarily for the sake of development, but for the sake of evaluation. Games like these can help stress to the FO where changes have to be made.