We Can Talk About a Win(!), The Bulls Improved Defense, Garrett Temple's Value, and Other Bulls Bullets Skip to content 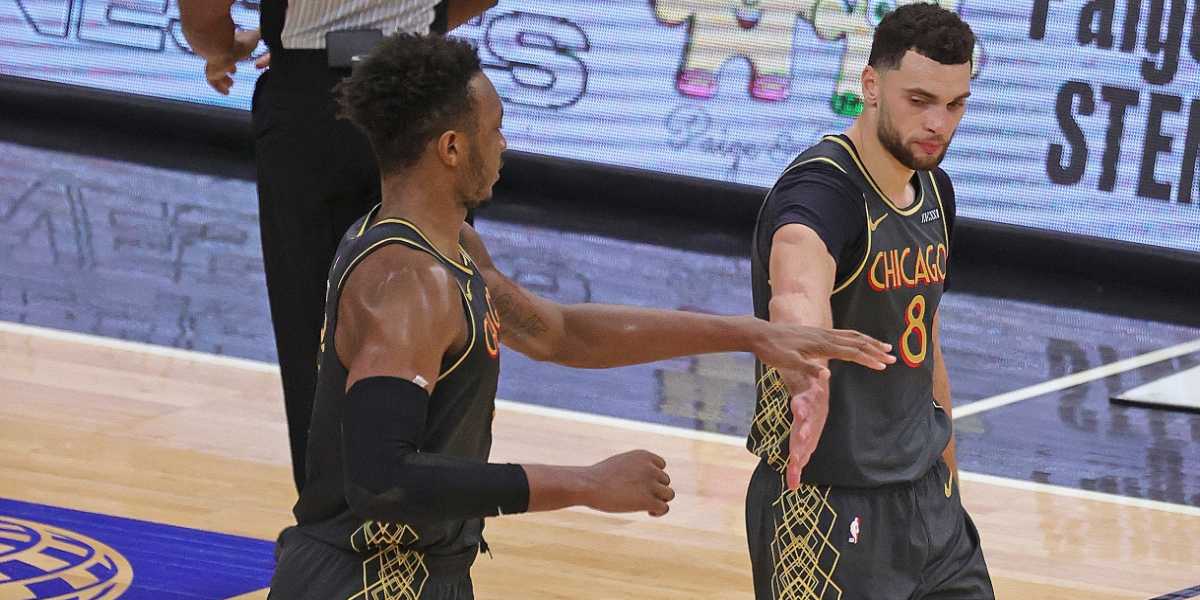 I’ve made the executive decision – the Bulls are no longer the worst team in basketball. That is until they piss me off again!

•   You know how every once in awhile you catch a glimpse of yourself in the mirror and go, “man, I’m actually pretty good looking.” Maybe it’s because you just got a haircut; maybe it’s because you just got a workout in at the gym; or maybe it’s because you were sporting a Statement Edition jersey with the Jordan logo on it for the first time. For the Chicago Bulls, it was the latter. Last night, the team not only picked up their first win of the new season, but they did it in style. The team actually looked pretty damn good. And while I know it was against a fellow 0-3 Wizards team, we and the Bulls are in no place to take an opponent for granted. The Wizards still have two elite, All-Star caliber players on their roster, and many expected them to finish well above the Bulls in this year’s standings. Sure, that still very well could happen, but last night this Bulls team legitimately looked superior.

Take a look at last night’s WIN against the Wizards, brought to you by @ConstellationEG: pic.twitter.com/HF0rT5I7dk

•   Typically, 24 hours after we have that egotistic experience in the bathroom, though, we catch another glimpse of ourselves in a window or something and go “man, is that really what I look like!?” That’s what we have to hope doesn’t happen to the Bulls. Instead, we have to hope that head coach Billy Donovan has pumped so much hubris into this locker room that these players believe they’re capable of looking that good – and even better – every night. For that to happen, I’m sure there were be a handful of positives that will be discussed in the film session later today, starting with the team’s much-improved defensive performance.

•   The Bulls had allowed at least one 36-point quarter in each of their first 3 games. The Warriors went into the half with 60 points to their name, while the Pacers had 66, and the Hawks had (a grotesque) 83. Last night, the Wizards only managed 46 points over their first two quarters, and the Bulls held them to just 20 points in the second quarter. Some of this is due to Washington’s own unforced errors, but Chicago deserves credit. The team and help defense looked substantially better than in the first three games. I mean, we didn’t see really anything like this in their first three games.

Baby steps for the Bulls: I saw some strong defensive possessions in that first half. Younger guys are improving on help rotations. Helped cut off Beal 3x on Markkanen mismatch.

They held Washington to 46 points in that first half, opponents came in averaging 70 against them. pic.twitter.com/4R7DuRe9BC

•   Yes, Westbrook scored, but Billy Donovan will happily live with that shot. On the other end of the floor, we saw this offense take another step in the right direction. For the second-straight game, the Bulls had at least five players score in double-digits, including four of their starters. The Bulls even managed to add two new faces to the party, with Garrett Temple and Tomas Satoransky scoring 12 and 10, respectively. This is what we want to see from a team that doesn’t have a superstar, and this is also exactly what Billy Donovan envisioned with his equal opportunity system. What I was even more refreshed to see, however, wasn’t even the point distribution, but rather that three players finished with 6 assists – Coby White, Zach LaVine, and Tomas Satoransky.

•   White, specifically, finished with quite the well-balanced stat-line for a “Lou Williams-type bench scorer …” (*he types sassily*)

•   LaVine did the same for a player who is nothing more than a bucket-getter (*he types with even more sass*):

Zach's game is so smooth.

•   Another player who deserves a tip-of-the-hat is veteran (MAJOR FREE AGENT GET!) Garrett Temple. Despite missing all of the preseason and the Bulls first two games of the regular season, Temple has already proven to be the reliable bench piece this front office wanted. He finished with the bench’s only positive +/- of the game, and it also happened to be tied for a game-high at +14. Part of that is due to his time on the court with several staters, but the other is because he, once again, looked like one of the most competent defenders on the team. Donovan went with him to try to close out the night for the second-straight game, and I wouldn’t be surprised if this becomes the norm.

•   It wouldn’t be bullets without some Patrick Williams love!

I continue to be impressed by how good Patrick Williams is at these corner crashes. Watch him fly in from the bottom right corner of the screen. pic.twitter.com/p3pBn7pFqv