Billy Donovan Is Already Having a Massive, Positive, Tangible Impact on the Chicago Bulls Skip to content 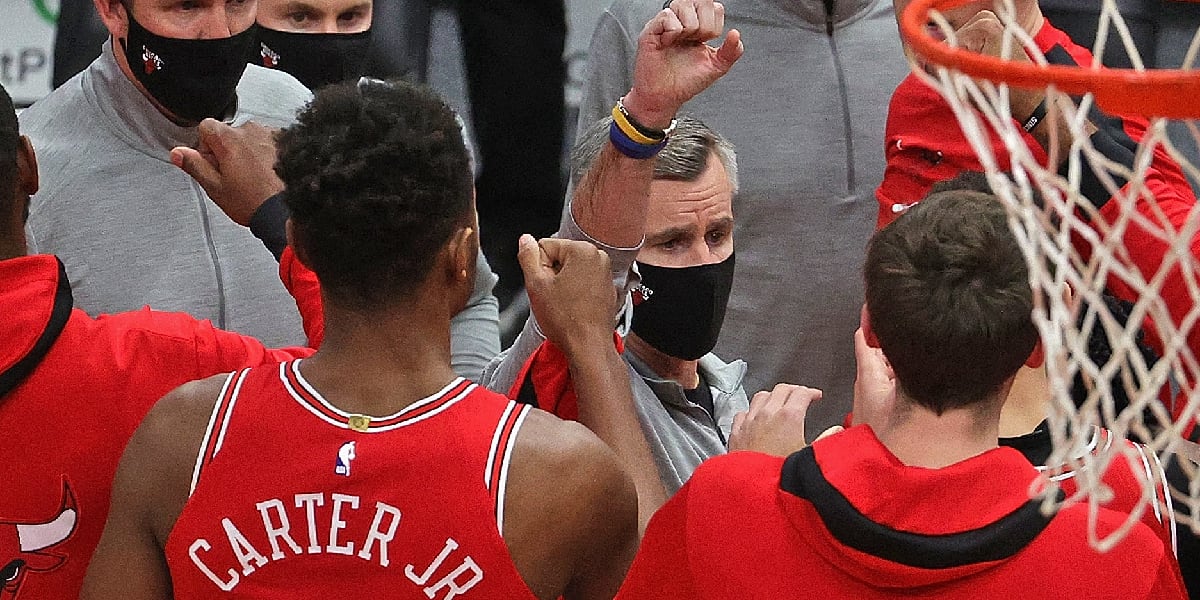 I have an announcement: The Chicago Bulls are as good as the Brooklyn Nets.

If the playoffs started today… pic.twitter.com/Srx5EC5M6Y

But starting this conversation off that way felt appropriate. After all, pretty much everything we discuss over the first 10 or so games of the season must be taken with a grain of salt. The Nets and Bulls are not going to be record buddies for much longer, especially when we consider the gauntlet schedule Chicago has coming its way this week. However, while we can’t infer much from the league’s standings, we can at least feel somewhat encouraged about the fact that the Bulls, individually, sit at 3-4. If we want to get real spicy, we can even say the Bulls were one missed five-second violation (or one missed moving screen (or one missed buzzer-beating three)) away from sitting at 4-3, but I guess we should avoid that rabbit hole.

The team has shown some noticeable improvement from game-to-game so far this season, and I can’t help but compare head coach Billy Donovan’s start to the year to Jim Boylen’s first full year as head coach in 2019-20. I know it might seem like I just want to reopen old wounds, but the fact of the matter is we’re dealing with a vastly similar roster from one year to the next. The Bulls new front office decided to keep things intact and let a more experienced head coach take a crack at teaching a not-so-old dog new tricks. And, for that reason, a comparison might be worthwhile.

If you remember correctly, the Chicago Bulls started last season with arguably the league’s easiest schedule. And despite that fact, the team suffered losses to the Hornets (finished 10th in East), Knicks (12th), and Cavaliers (15th) within their first seven games of the season. They were all games the Bulls should have won, but instead crumbled in the final minutes.

How the Boylen-led Bulls fell apart in these games:

•   Down 2 with 1:43 left to go, the Cavaliers went on a 9-5 run. The Bulls did hold a one-point lead in the early portion of the 4th quarter but were ultimately outscored 37-29 in the final frame. Wendell Carter Jr. was the only Bulls player to get to the free-throw line in the final 8 minutes.

How the Donovan-led Bulls finished things off:

It doesn’t take much to attribute a good chunk of this improved 4th quarter play to the head coach. Donovan has wisely made a number of moves to set this team up to better finish off close games. For example, he’s pretty comfortably married the concept of developing young talent and playing to win the game, and one way he’s accomplished this is through a balanced rotation.

The Bulls have easily one of the youngest starting lineups in the league with Coby White, Zach LaVine, Patrick Williams, Lauri Markkanen, and Wendell Carter Jr. These members of the Bulls young core get their run against the opposing team’s top talent, and then Donovan is able to go to his veterans on the bench – Otto Porter, Tomas Satoransky, Thaddeus Young, and Garrett Temple – to stabilize things later on. Having these guys available has also allowed Donovan to better pick and choose what decently-rested veterans to throw in his closing lineup, which we’ve seen contain White, LaVine, Porter, Temple, and Young over the last two Bulls wins. The veteran experience in the game to close things out has undoubtedly been one of the key difference-makers for this team, but it’s not the only notable difference from last season.

Donovan’s system has also given the Bulls a fighting chance. The motion offense has forced this team to play aggressively and therefore helped them become one of the most consistent free-throw shooting teams in the league.

Chicago is currently 4th in the NBA in free-throw attempts, and they’re actually 1st in free-throw attempts in the 4th quarter. I don’t need to tell you this, but shooting freebies is not only a good way to regain control of a game, but stretch out an already established lead. The Bulls have recognized that thus far this season and have used it to edge out close games.

I also can’t help but point out that the all-around decision-making has simply been better. Rather than relying on a trigger-happy Zach LaVine, Donovan seems to have forced these players to stick to the gameplan (for the most part … they still need some practice, of course), which allows for the team to shoot with the 6th-best TS% (shooting efficiency that takes into account 2’s, 3’s, and FT’s) in the 4th quarter this season (14th overall this season, 26th last year).

Sure, they are still 22nd in the league in turnover percentage and 24th in personal fouls committed, so there is work to be done. But the effect of Donovan is very real and very positive. And that should be encouraging for a number of reasons – one of which isn’t even strictly related to the development of this roster but potentially different rosters down the road.

Oh, and let’s not forget that Donovan has still made these early-season strides with plenty of bumps in the road. He has yet to have his full roster active for a single game this season, and two of his key players – Lauri Markkanen and Tomas Satoransky – have remained sidelined for the last three games. Making progress even in the face of adversity is what Donovan preaches, and it’s so far what he is accomplishing.