Another Step in the Right Direction, Zach LaVine is Special, Coby White's Mini Slump, and Other Bulls Bullets Skip to content 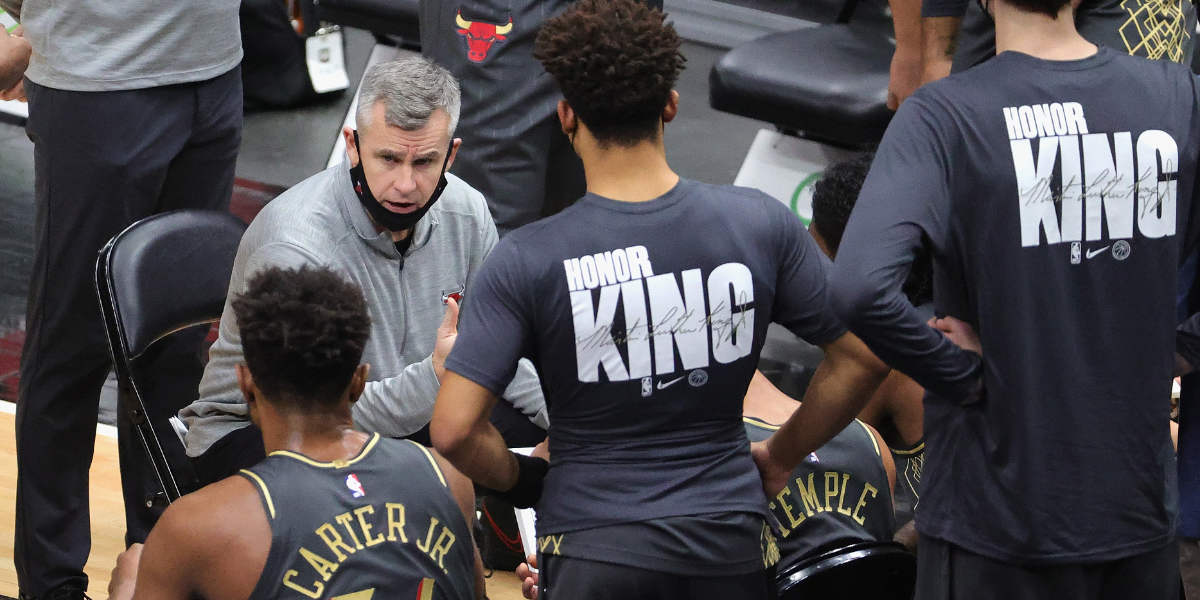 Who are these men, what have they done with the Chicago Bulls, and can they keep doing it?

I present to you, the new Chicago Bulls 🔥

•   The ball movement and execution on that single possession might as well be the best example so far of how severely things have changed in Chicago. Seeing the front office overhaul, the coaching staff turnover, and the Patrick Williams selection are all important, but they mean very little if the on-court results fail to simultaneously take a 180. In more ways than one, this was the repeated failure of the old regime. Despite how many times they told us growth and development was ongoing, the product on the floor never changed. Now, under Arturas Karnisovas watchful eye and Billy Donovan’s calm hands, we see the Bulls hold a 6-8 record. A below-.500 mark may not feel like anything to pop champagne over, but that is this franchise’s best start in four years. And when that fact is followed up by the eye-popping, team-oriented, beautiful basketball we see above, it only feels that much more worth celebrating (Michael: Not to mention there are at least two games that could/should have very easily swung their way … one of which was confirmed by the league, itself).

•   As pissed off as us Bulls fans have gotten over the years, I actually think we’ve been pretty tame in our demands. All we’ve really wanted was to see in-season progress (Michael: And possibly to fire a certain front office duo + head coach immediately, but who’s counting?). And while there is still a long way to go, that finally appears to be what is happening. After scaring the pants off us (no, just me?) with a blown 22-point lead and overtime loss to a beatable-OKC squad, the Bulls have rattled off back-to-back W’s. Even more encouraging, they’ve done so by doing exactly what they failed to do in that matchup with the Thunder – close. As certified Bulls-killer Victor Oladipo brought the Rockets within 4 points on Monday night, the Bulls responded by simply doing what they did the whole game. Thaddeus Young, Garrett Temple, Lauri Markkanen, and Zach LaVine all looked for the best shot and scored big buckets in the final 2:40 seconds to help the Bulls maintain a winning margin. And, believe it or not, LaVine was the one to pass-up the dagger attempt to the more-open Markkanen.

•   LaVine’s improved playmaking and offensive IQ continues to be a massive storyline this season. Sure, last night he dropped 33 points (his 7th time scoring 30+ in 14 games), but somehow it still felt like a quiet scoring night for the 25-year-old. What stood out instead was his 7 assists, 4 rebounds, 2 steals, and 1 block. The performance was the epitome of a complete game, and that seems to be where LaVine’s new focus lies: “Obviously, everybody wants to be the leader, but you’re not just gifted with that, so you have to learn it,” LaVine told media members after the game. “I feel like I’ve taken a step in the right direction and trying to be more unselfish, be more open with talking to teammates, watching film, and things like that. I feel like it’s going well.” I’d say so.

•   Coby White has struggled to do Coby White things the past two games, and he knows it:

The game just ended. @CobyWhite is still getting up shots. Let’s be great ✊ pic.twitter.com/JyVRHPTvXz

•   Just when I thought I couldn’t buy more stock in this man, here I am transferring funds. White has been able to still finish with 4 assists in each of the Bulls past two wins, but he has finished with only a combined 10 points. Fortunately, the Bulls have not needed his scoring to stay in the game, but I have to imagine that can only last for so long. My best guess is that Lauri Markkanen’s added presence has made for a tiny adjustment period for Coby White. The Finnisher has played remarkably well this season, and it’s just a fact that his return was bound to take away some of the offensive reliance on White. At the same time, we should probably remember White averaged 39.5 minutes per game in the four contests before Markkanen returned. In the Bulls matchup against the Lakers and Clippers, he played 42+ minutes each night. When all of that’s the case, I can’t blame the guy for hitting a brief slump. Also, it’s not like he still hasn’t positively impacted the game. White was the only Bulls starter last night to finish with a positive plus-minus, and his contributions keeping the offense in motion can be seen in both videos shared above.

I was hoping for more activity this offseason, but every move Arturas Karnisovas *did* make is working out pretty great:
– Billy Donovan was an excellent hire as coach
– Garrett Temple is a perfect fit & bargain in free agency
– Patrick Williams looks like a worthy No. 4 pick

•   We’ve brought up similar points in the past. Karnisovas may have kept things limited this offseason, but he has certainly demonstrated the needed traits to improve this organization. If just two new talents (a 19-year-old/35-year-old) and a new head coach can make things feel this different, imagine what Karnisovas can do when he really begins to shake up this roster.

•   LOVE. THIS. If you watch the Bulls bench closely, particularly during timeouts, I feel like I’ve seen a lot of similar interactions going on. Thaddeus Young and Garrett Temple have not been shy about coaching up guys like Patrick Williams and Coby White, which is exactly what this coaching staff and front office wants from them.

This is really great. https://t.co/yVcxsQvUgH