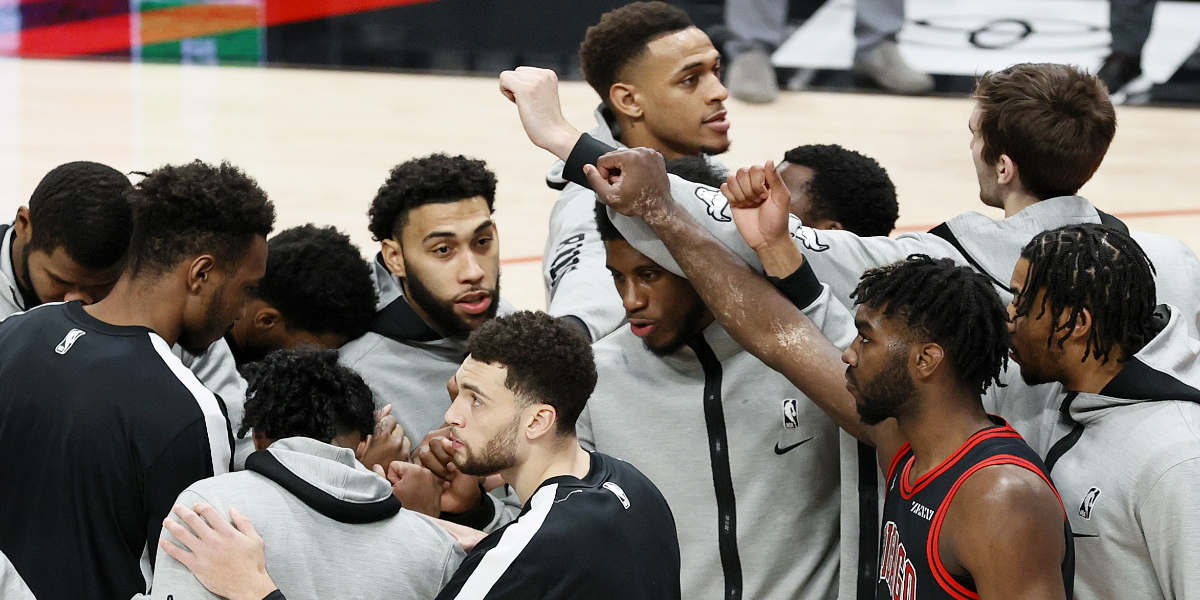 The letter of the day is T.

Tuna, tiger, thirst-trap, trousers, and Teletubbies all begin with that magic letter. But would you like to know a much more important word that starts with T, kids?

BORING! WE WANTED TO LEARN MORE ABOUT THIRST-TRAPS!!!

•   Like many things for NBA players, trust is something that often improves with age. More reps and a wider-range of experiences at the pro-level can help players understand (1) how to better trust their teammates and (2) how to better decide who is worth trusting. With that being the case, it isn’t all that surprising that several of these young Bulls players (who’ve struggled to stay on the court together AND have done nothing but lose) have struggled to learn this valuable lesson in the past. While I can’t say for sure, I do think this is yet another area we have seen take a step in the right direction under head coach Billy Donovan. With several close games, a couple more wins, and a string of helpful veterans, this Bulls team is playing their most trustworthy basketball in years.

•   What does that mean exactly? Well, players are making the extra pass and searching for the best shot. Seven players have scored in double-digits multiple times this season, and the Bulls are currently 12th in the league in assists per game (25.4). We have even seen score-first guards like Coby White and Zach LaVine hand in their bucket-getting badges for facilitating duties on some nights, both having at least two games this season with 9+ assists. Guys are also noticeably more locked-in on the sideline, as players are immediately walking up to their head coach when the whistle sounds and actively talking strategy in the huddle. Those things may sound silly to bring up, but being this engaged off the court is a major part of building that trust on the court.

•   Chris Bleck, Adam Abdalla, and Tony Gill all touched on this improved trust on the Bulls roster during a conversation on ESPN 1000’s Bleck & Abdalla. Likewise, we also heard this keyword used to jumpstart talks with NBC Sports Chicago’s Rob Schaefer on 670 The Score’s Bernstein and Rahimi show. The point being, the newfound trust for one another on the Bulls roster has been one of the most encouraging and noticeable advancements made this season.

•   I strongly recommend listening to both conversations, but what Bleck, Abdalla, and Gill have to say about LaVine really hammers home many of the recent discussions we’ve had here on BN Bulls. The steps we’ve seen him take so far this season appear to be no joke, and he is arguably the player that best demonstrates today’s topic of trust. He is averaging the highest assist total of the year, and his court/situational awareness is at a level we have never seen before (remember how actually made the extra pass to Markkanen for the dagger on Monday!?). The effectiveness he has shown scoring the ball at all three levels, and particularly in the pick-and-roll this season, and has opened the floor up for the entire team. In several ways, the floor may have been that open on his high-flying scoring nights before, but LaVine never knew how to take advantage. That has certainly changed.

Like it or Not, Trade Talks Will Probably Ramp Up as Zach LaVine Continues to Demonstrate His Abilitieshttps://t.co/utXli7xsHh

•   Speaking of trade talk, ESPN’s Brian Windhorst wrote a very interesting piece about half of the league’s lack of tradeable first-round picks. The Bulls are not one of those franchises handcuffed, which could very well give them an advantage over the next couple of seasons if high-level talent becomes available.

27 years ago: Toni Kukoc banked in a game winning three with 0.8 seconds remaining to beat the Pacers! pic.twitter.com/6DfrpnFxw0

•   What Sexton did last night was awesome … but we really gotta get rid of that Young Bull nickname.

•   Remember, the league’s digital intake is up a TON, so reading too much into ratings is kind of useless. Still, this is good.