The following is the first word that came to mind when trying to describe tonight’s game: Ew. Just ew.

From the moment the ball tipped-off, things felt out of sorts. The open shots weren’t falling. The ball movement was lazy. And the energy was low. There were moments here and there where the Bulls normally electric offense appeared as if it would finally kick things into high gear (especially in the 4th quarter when they scored 9 points in 57 seconds and managed to cut the Celtics lead to only 10 with roughly 3mins to go), but that was normally followed by a frustrating turnover or clutch Celtics bucket.

Zach LaVine finished with 30 and Lauri Markkanen added 18, but the Bulls starting lineup didn’t offer nearly enough for the Bulls to have a true shot at winning this game. As for the bench, they pretty much carried their weight. The veterans did what they could to keep things (kinda) within striking distance – especially Thaddeus Young, who teased us with a shot at his first career triple-double – and outscored the Celtics bench 49 to 37.

Also, for what it’s worth, the game plan just seemed weird to me. The Celtics have sent players to the line often this season, but the Bulls didn’t look invested in attacking the rim. In fact, they instead shot a season-low in free-throw attempts with only 10. Likewise, I felt like the coaching staff really struggled to get Markkanen involved. LaVine and White were bound to struggle with Jaylen Brown and Marcus Smart in the backcourt, so I would’ve really liked to see a bit more emphasis on letting Markkanen cook.

Oh well, I’m just hoping these last two games are not the start of a new trend. The Bulls have done a lot of good things so far this season, and perhaps Donovan should remind his players of those things over the next couple of days. 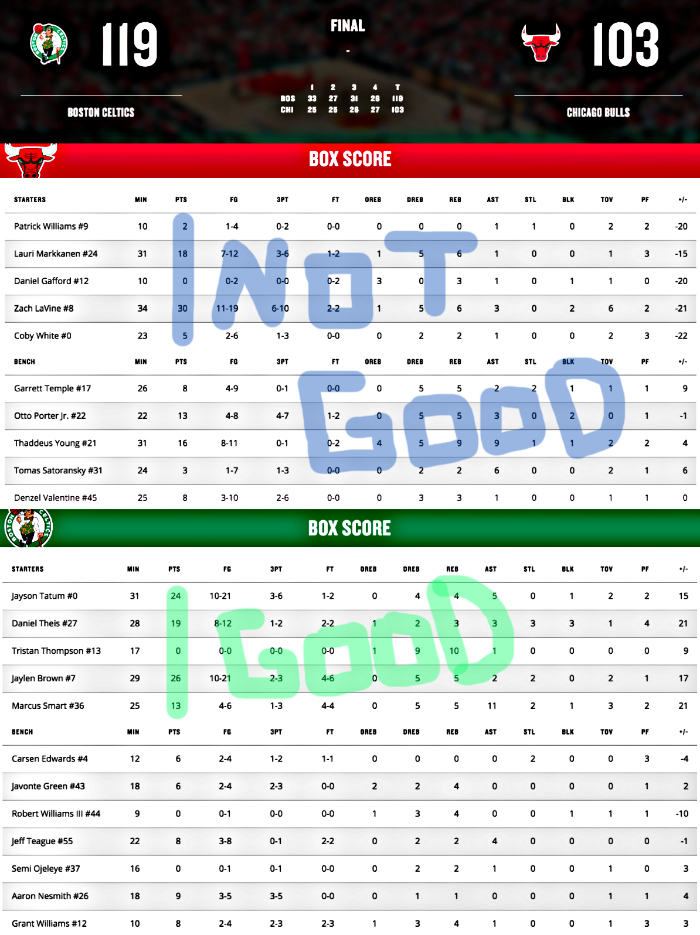