With a blazing hot Julius Randle and young seven-foot rim-protector Mitchell Robinson leading the Knicks frontcourt, I thought it would be all up to Zach LaVine and Coby White to run the show. Instead, Lauri Markkanen and Daniel Gafford rose to the occasion with a combined 42 points and 14 rebounds. Markkanen, however, scored 30 of those points and looked like arguably the best player on the court. He not only continued his highly efficient shooting from downtown (6-12), but he played arguably the most aggressive game we have seen from him since his 35-point performance against the Hornets to kick off the 2019-20 campaign. This is now the second-straight game Markkanen has scored 30+, and the first time he’s done it in back-to-back contests since his widely-praised February of 2019.

Now, full disclosure, that chunk you read above was written prior to the start of the 4th quarter, which probably (definitely) jinxed Markkanen’s chances at a career-high. The Finnisher literally went on to score 0 points in the final frame, but whatever … the guy had a good game and it should be considered a very encouraging performance.

LaVine and White get the hat-tip for pulling things together in the final few minutes of action, each converting a clutch 3-pointer of their own. Likewise, Thaddeus Young continued to be all over the court but, ONCE AGAIN, fell just shy of pulling off a career-first (see below).

At the end of the day, six Bulls in double-figures and 30 assists feels like a solid recipe to success. Now, let’s do it again on Wednesday! 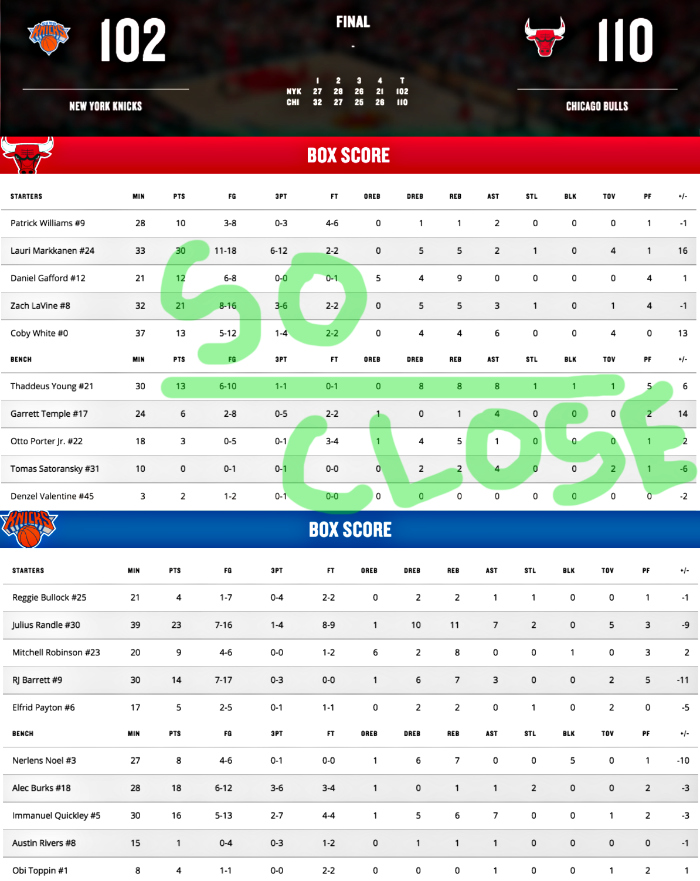