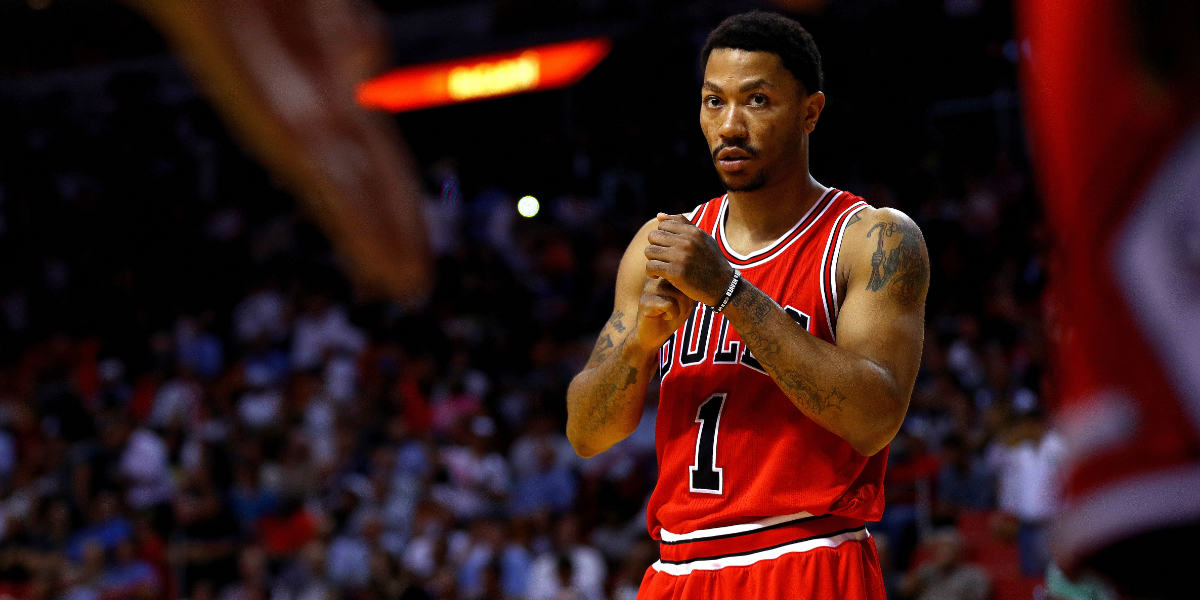 In other words, when Rose went up against the best, he played his best.

•   I hate the D-Rose didn’t deserve MVP argument. Were there other great players that season? Sure, and that happens to be the case every freakin’ season. I don’t care. What Rose did during his 2010-11 campaign was worthy of the accolade. He led one of the league’s most renowned organizations to a 62-20 record. Rose repeatedly went toe-to-toe with his fellow-MVP contenders and helped his team avoid a below-.500 record against each of the top-6 organization’s in the league. Oh, and he managed to do all of this while being just 23-years-old. Also, the MVP award is more than just stats (and make no mistake, Rose met that criteria too). Rose’s sudden rise not only captivated fans across the league, but it told a remarkable story. The hometown kid brought his struggling organization back to relevance – back to being one of the league’s best franchises. His value to the NBA, the Bulls organization, and the city of Chicago only made his case for the trophy that much stronger. Deal with it *shrug emoji.*

•   Recency bias can be a pesky thing, too. NBA fans see the player Rose has become and begin to question everything he did in the past. The same thing happened in varying degrees to players like Carmelo Anthony, Dwight Howard, Amar’e Stoudemire, and Tracy McGrady. Just because injuries happen doesn’t mean what a player previously accomplished is any less significant. And while some of the greatest can adapt to this, the same can be said for changes to the league’s style of play. The fact of the matter is, Rose was one of the best players in the early 2010s, and there is no argument to be had.

•   Aw man, do we really have to talk about the present? Fine. Thaddeus Young provided us with a big reason why the Bulls lost last night’s game to the Knicks:

Thad Young on #Bulls' loss to Knicks: "We tried to essentially win the game in the last 12 minutes. We can't do that. We're not a team that can just flip the switch on. The light has to be on at all times."

•   I mentioned this in our postgame, and it still infuriates me this morning. Two days after playing a full 48-minutes against the same team, the Bulls came out with no sense of urgency. I continue to be amazed by this roster’s ability to show so much progress one game before throwing it all away the next. I know that can oftentimes be the case with a young roster, but that doesn’t make it any less painful to watch, especially when this team has rolled with the same young core for several years now. Ugh.

•   So it’s very clear the Bulls need Wendell Carter Jr., right? While the Bulls ended up winning the paint battle somehow, the Knicks did manage to score their first 22 points of the game underneath the basket. They killed the Bulls with their dribble penetration, as their backcourt struggled to stay in front of guys like *gulp* Elfrid Payton, and their frontcourt struggled to actively contest shots. Lauri Markkanen and Daniel Gafford simply can’t be trusted to protect the rim – let alone rebound consistently (lost battle 57-44). Thaddeus Young can do a better job putting his body on guys, but he also stands at an underwhelming six-foot-eight. Smart opposing bigs will take advantage of the size differential with ease. So, yeah, to say I’m worried about a matchup with the savvy Nikola Vucevic this weekend would be an understatement. The Magic may not be all that special, but he will no doubt have the upper hand against this Bulls frontcourt.

•   Coby White is 20-years-old and in his second season. Can we cool it with the hate?

•   Patrick Williams falls at No. 7 on Jonathan Wasserman’s latest Rookie Ladder over at Bleacher Report. If last night’s game is any indication – 12 points (6-12 FG) with 7 rebounds – we could see him start to creep back up the rankings after his mini-slump in January. I really liked what I saw from him on the offensive end, as nine of his 12 shots came from inside 13ft. He has flashed the ball-handling and smarts to chose the right driving/cutting lanes, and while I know his hops allow him to elevate nicely over defenders for a clean look, I’d like to seem welcome contact a bit more.

DraftKings Sportsbook is going big for Super Bowl 55 with up to a $1,000 deposit match and a 2x your money touchdown bonus for the big game: https://t.co/659XbTu45P