Losing to the Knicks and Magic in back-to-back games feels like some real 2019-20 crap.

The Bulls were once again looking to put together a come from behind win, and while they had some encouraging moments on both sides of the ball, they came up short in concerning fashion yet again. One game after tying a season-low with six 3-pointers made and a 16.7 percent shooting performance from long-range, the Bulls only managed to knock down an additional three 3’s. Likewise, the team’s frontcourt stood zero chance against the much more aggressive Magic. Big man Nikola Vucevic – who I was all kinds of terrified to face with no Wendell Carter Jr. on the floor – bullied Daniel Gafford out of the game and ended with a career-high 43 points. Oh, and he also hauled in 19 of the Magic’s 49 total rebounds. Yeah, he’ll be in my nightmares tonight.

In other terrible news, Lauri Markkanen had to leave the game after only 17 minutes of action due to a right shoulder sprain. He certainly looked to be in a considerable amount of pain, and Billy Donovan said it’s unlikely he plays in the backend of the back-to-back set for tomorrow. The decision not to play him one night after this injury would make sense for precautionary reasons, but we have to hope it’s only because of that. Markkanen is another Bull who has been no stranger to injury trouble in the past, so I’ll be knocking on all the wood in my apartment that this isn’t anything too serious.

Fortunately, for my sanity and yours, there is one positive takeaway from tonight: Patrick Williams. The rookie had arguably the best game of his young career with 20 points and 7 rebounds. He attacked the rim from start to finish and shot a perfect 6-6 from the FT line. It was a pretty major step for a player that has been far too hesitant on the offensive side of the ball.

Ok. That’s it. I’m going to go light a candle, watch some TV with the girlfriend, and try not to think about how life is a meaningless pit of sorrow. 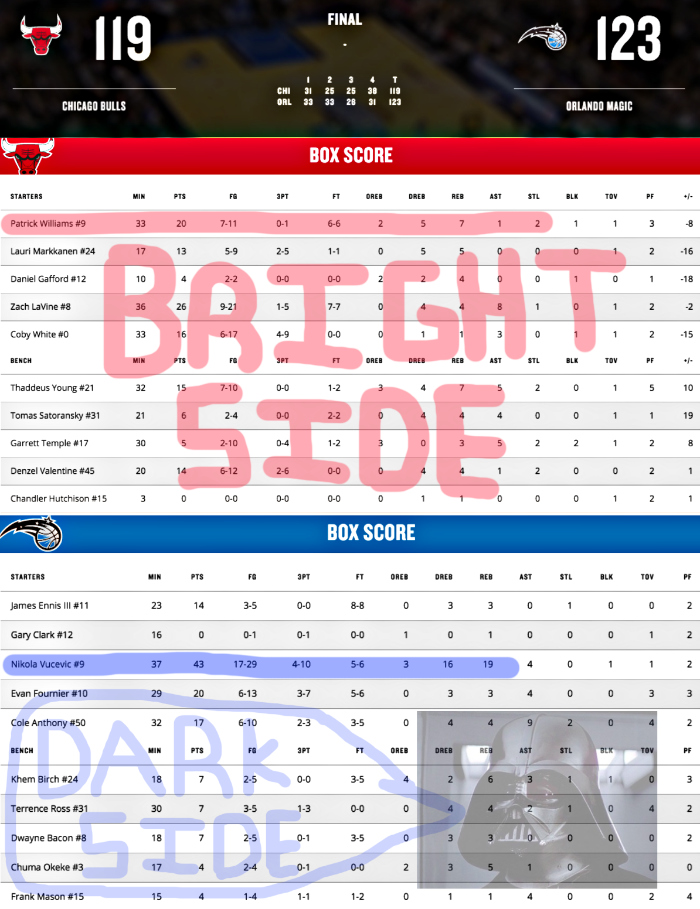 You can check out the full box score here.