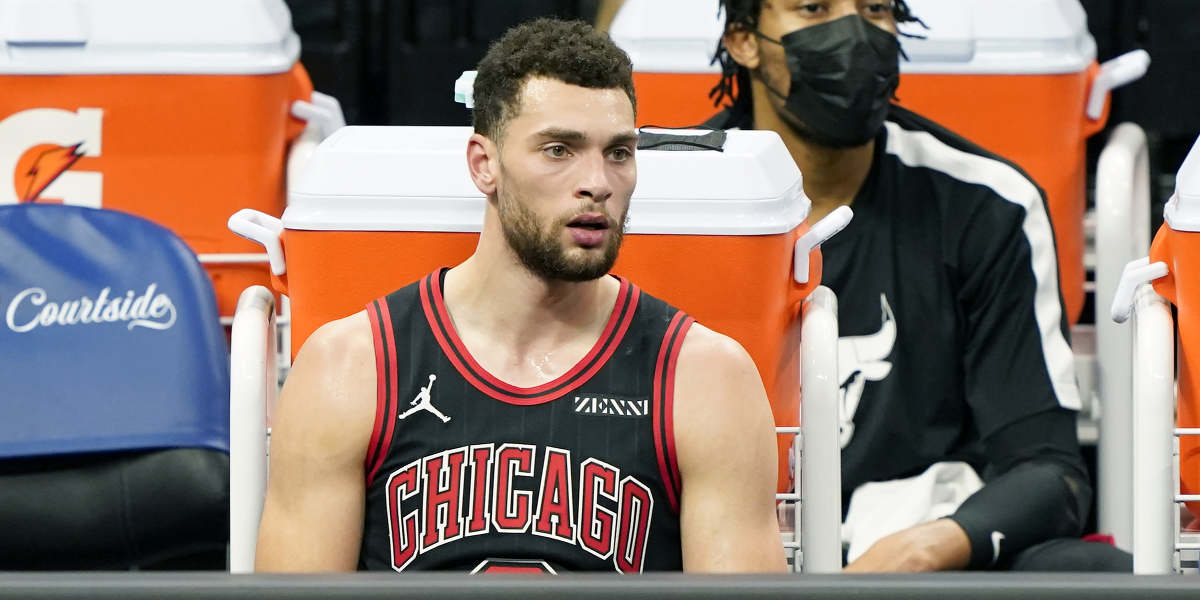 Can you guess what these bullets are about?

•   As Zach LaVine’s production ramps up, so do the trade talks. On Thursday’s episode of The Jump, ESPN’s Brian Windhorst said that executives around the league are keeping a close eye on LaVine’s availability. However, he was also clear about saying that the Bulls would likely only look to trade LaVine if the return involved a superstar talent.

More Indication the Bulls Aren’t Looking to Trade Zach LaVine (Unless It Were for a Superstar)https://t.co/fki1J2cJJh

•   On that same episode of ESPN’s popular hoops show LaVine spoke with Rachel Nichols about his career-season, Billy Donovan, and (of course) the trade speculation: “You hear it all the time in the NBA. As of right now, I’m so happy to be a Chicago Bull. I think it’s a good thing that your name is always mentioned because that means people are always interested in you. But I’m just trying to help this team make the playoffs obviously, and I’m going to continue to do that to better myself and to better the team.”

•   LaVine has been just as much a true professional as he has been adamant about his plans to bring the Chicago Bulls back to relevancy. I respect the hell out of him for that. Throughout his entire career, he has been handed the short end of the stick (six coaches in seven seasons, an ACL tear, not a single winning season, etc), but you would never once feel like that misfortune, and the criticism that comes along with it, has gotten to him. Instead, he seems invested in his continued growth and future success IN CHICAGO, which he also alluded to in a conversation with K.C. Johnson on the Bulls Talk Podcast: “When the Bulls are clicking, and we get back to the right stage of winning, I just think it’s going to be incredible for us.”

•   Someone is doing their All-Star media rounds, huh? Even with a new front office intact, the Bulls are clearly not shy about letting LaVine represent the organization, and that could very well tell us something about their intentions moving forward. As multiple reports have now suggested, it would take a lot for the Bulls to part ways with the 25-year-old, which means it’s becoming increasingly likely that LaVine could be here for the long haul. In fact, I wouldn’t be surprised if Arturas Karnisovas and Marc Eversley see their future No. 2. LaVine has been miscast in a No. 1 role over the past several seasons, and while he does continue to show improvement, I think most would agree he isn’t going to reach this mark. However, one full season of the basketball he’s played lately, and LaVine should be pretty comfortably viewed as a capable No. 2 on a good team. And if that is the case, why would the Bulls ever want to get rid of one (young) puzzle piece? The Blazers did not get rid of CJ McCollum. The Bucks did not get rid of Kris Middleton. The Warriors did not get rid of Klay Thompson.

•   Look, I’m not saying LaVine will necessarily live up to any one of those players specifically (McCollum is probably the closest career-comp), but he is looking like a guy that could very well play the second part of a dynamic duo awfully well. The question then becomes, how do you pair him with a true No. 1? Fortunately for me, that is something Arturas Karnisovas has to answer. All I know is that this season is about evaluation, and it is becoming clear that the Bulls appear to have a building block (and the interest from other teams around the league further demonstrates that).

•   The Bulls will tip-off a back-to-back road series against Orlando tonight, and I’m VERY scared of Nikola Vucevic. Lauri Markkanen and Daniel Gafford struggled to stop Julius Randle and Mitchell Robinson on Wednesday night when both players upped the physicality. Vucevic is a beast crashing the glass (8th in REBs per game), and he is also one of the league’s more savvy offensive big men. Heading into this game, he is shooting a ridiculous 43.3 percent from behind the arc … and that comes on 6.2 attempts per game. With no Wendell Carter Jr. on the floor, he is truly a matchup nightmare for the Bulls.

Coby has a message for y’all…