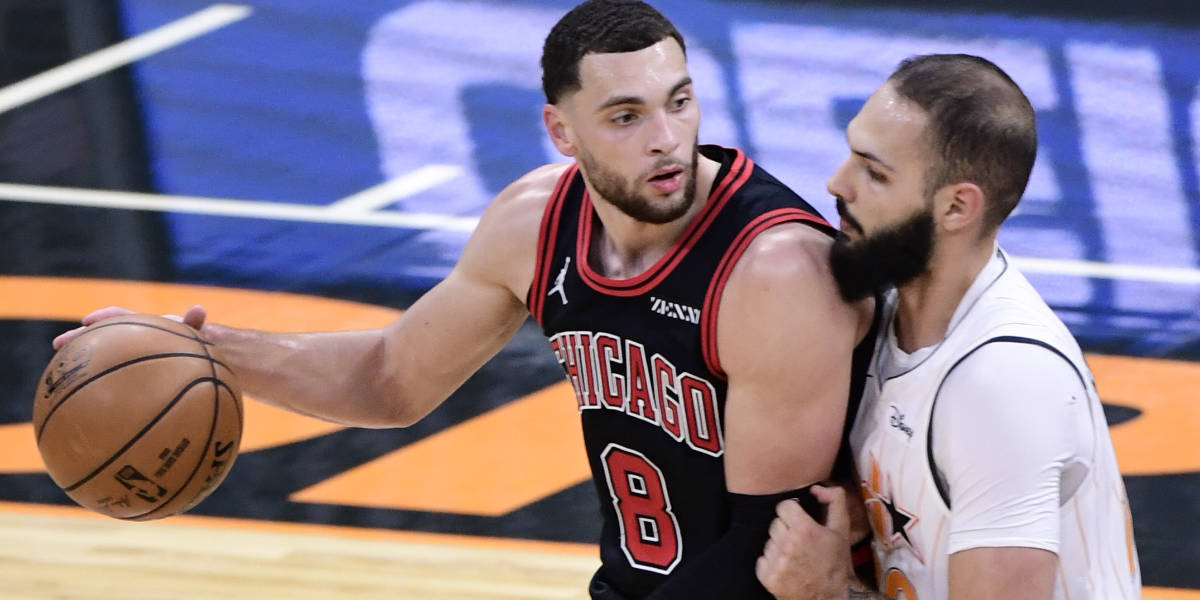 •   No Lauri Markkanen and no Otto Porter? No problem. The Chicago Bulls followed up some of their most uninspired basketball with a punch-you-in-the-mouth-and-spit-on-you kind of bounce-back performance on Saturday night. The team shot 50 percent or better from both the field and behind the arc; they came out on top of the turnover battle for the third-straight game, and they recorded a season-high 10 blocks. Their offense was efficient and their defense was surprisingly scrappy. Sure, the Magic may not be some kind of powerhouse, but the Bulls did what they are supposed to do if they want to begin to separate themselves from their fellow Eastern Conference bottom feeders. And while the players deserve a round of applause for their execution, it sure sounds like head coach Billy Donovan deserves his own share of props.

•   Both Zach LaVine and Denzel Valentine praised their head coach following the game, sharing that he provided a motivational speech of sorts on Saturday morning: “As all good coaches, great coaches, they find a way to motivate their team,” Denzel Valentine told reporters. “They find ways to bring out the best in their players. And he just said if we want to be a playoff team or take our team to the next level, which we have the ability to do, we need to come out and show it. Nobody is just going to give it to us … he just challenged us like can we do that?”

•   LaVine boiled Donovan’s words down even more: “Go out there and try to blow these guys out.” You LOVE to hear it.

Y'all crazy if you want the Bulls to trade Zach LaVine.

•   Let me be clear, just because we share the trade talk we see around LaVine does not mean that we endorse it. My job is to obsess about the Bulls, so when I see rumors that other organizations are sniffing around the team’s best player, I’m obviously going to share/give my thoughts on that information. When it comes down to it, though, I’m becoming increasingly comfortable with the idea of keeping LaVine for the long-haul. I’ve always been open to an extension, but the way he has played to start this season has only convinced me more that this is the path the Bulls should walk. I know the comparison isn’t perfect, but do we remember the last time the organization got scared about re-signing their best player? Mmhmm, that player went on to become a top-15 talent in the NBA.

•   I don’t know how much better LaVine can get, but I do know that he has managed to improve each and every season. We have seen him go from 23.7 ppg (2018-19) to 25.5 ppg (2019-20) to 27.0 ppg (2020-21). We have seen his shooting percentages, assists, and rebounds all follow a similar trend. The fact that he is only 25-years-old and has shown this progression despite all of the Bulls inner-turmoil should have the front office feeling even more confident that a future with LaVine as a foundational piece can be a bright one. Singular performances like last night I’m sure also play a vital role in reiterating that belief. From start to finish, LaVine looked like a player who wasn’t going to settle for anything less than a blowout victory. He started the game by attacking the rim, with seven of his eight shot attempts coming within 12ft of the basket in the first quarter. Then, to end the game, he added three 3’s and 11 total points as if to say, “don’t even think about getting back into this thing.” That is not only what winning players do, but it’s what star players do. When you’re in the Bulls situation, you just can’t let a player like that go.

•   Good news: There seems to be positive vibes around Lauri Markkanen’s injury not being too severe. Hopefully, he can get through the MRI with flying colors and get back on the court this week.

Bulls haven’t submitted injury report for Wizards game yet. As of last night, there was more optimism than pessimism that Markkanen’s shoulder sprain wasn’t serious. But obviously MRI that was scheduled for today needed to make sure initial exam was accurate.

The rookie is giving Bulls fans A LOT to be excited about.

Good window into Donovan’s philosophy and pursuit for consistency/competitiveness with young team. pic.twitter.com/L6h8MpEXpr

•   Somehow they did this without Wendell Carter Jr. and Lauri Markkanen.

The Bulls entered tonight's game averaging 3.8 blocks per game, second-fewest in the NBA.

•   The Ball rumors aren’t going away. If anything, the stove is just becoming hotter.

Bulls Are Currently the “Most Likely Landing Spot” for Lonzo Ballhttps://t.co/5ZyuTPEdAZ

FanDuel Sportsbook has the best odds boost for the "BIG GAME" today.