Two steps forward … one step back.

Are we sure the Bulls don’t slap that phrase on their way out of the locker room?

Two nights after picking up a solid team victory over the Orlando Magic, holding a team under 100 points for the first time since 2017, the Chicago Bulls took a heartbreaking home loss to the 5-15 (now 6-15) Washington Wizards. But don’t get me wrong, while it was heartbreaking, it was totally deserved.

The team shot a brutal 9-30 from downtown and stumbled back into old habits with 16 turnovers, from which Washington scored 21 points. At the same time, the Wizards scored at will in the paint (56-40 advantage), and the Bulls sent them to the free-throw line for 36 shot attempts. It was yet another performance where Chicago (1) couldn’t hang with an opposing team’s physicality and (2) showed poor execution in an incredibly winnable scenario.

How poor, you ask? This poor …

I’ll fight for LaVine to get a call all the time, but I can understand why the whistle wasn’t blown here. LaVine had a wide-open lane, Len went vertical, and he simply botched the layup. He clearly expected more contact, and he didn’t get it. Brutal.

So chalk this up as another bad loss. In fact, put the words “super-duper” at the front. The Wizards were on the backend of a back-to-back on the road and without Russell Westbrook. Sure, the Bulls were down Lauri Markkanen, Wendell Carter Jr., and Otto Porter but that isn’t an excuse for losing this game. The Wizards have dropped 7 of their last nine by double digits.

The Bulls now leave their five-game stint against the Knicks, Magic, and Wizards with a 2-3 record. I don’t care if it’s an evaluative season or the team is short-handed. I think they would agree … that’s just not good enough. 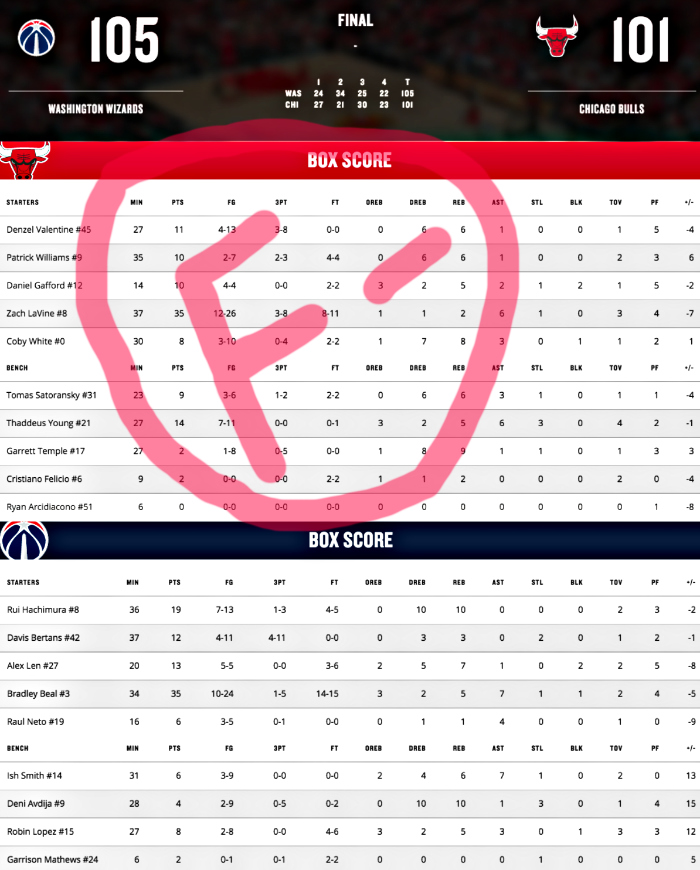