A Disappointing Stretch, Struggling with Size, Beal Throws LaVine a Shoutout, and Other Bulls Bullets Skip to content 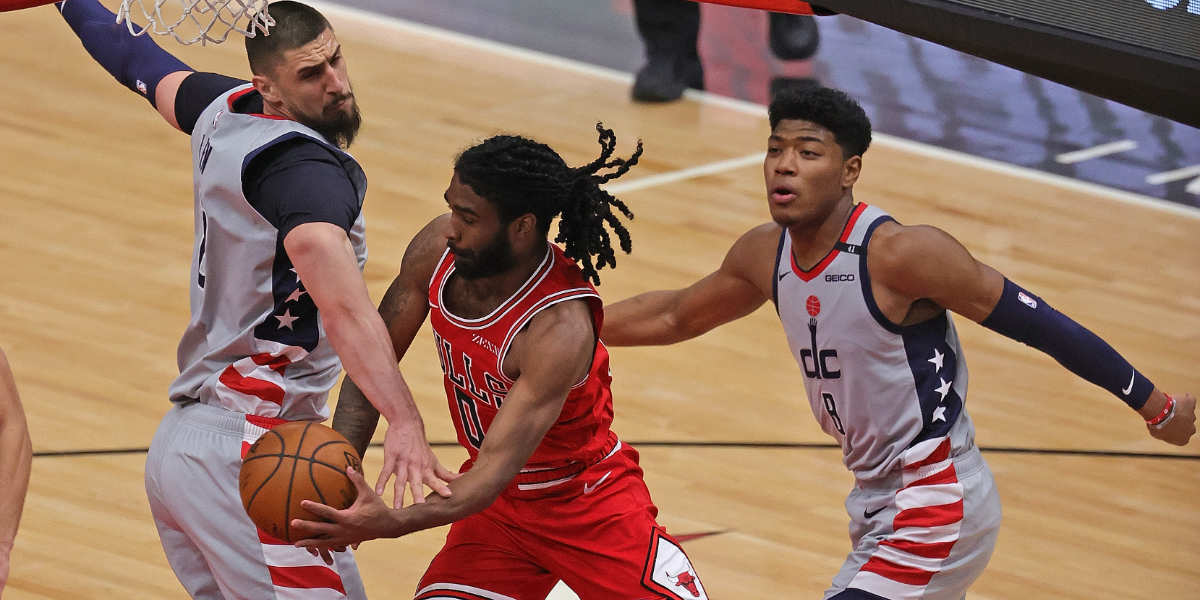 Not good enough. Those are the words my girlfriend utters whenever I try to make the bed, and those are also the words that best describe what we saw from the Chicago Bulls over the past five games.

•   With two matchups against the Knicks, two against the Magic, and one against the Wizards – all below-.500 teams – the Bulls managed to walk away with only a 2-3 record. That is one heck of a missed opportunity … or is it? A missed opportunity might imply that the Bulls are better than those squads, and I’m actually just not sure that is the case. I do believe their talent level is superior to those rosters, but I think the same can be said about their ability to shoot themselves in the foot.

•   If it’s not turnover trouble, then it’s the lack of an engaged start. If it’s not playing with the right energy, it’s a missed wide-open shot. If it’s not bricking buckets, it’s sending a team to the line for 36 FTAs. We have seen this team lose by just three and two points to the Los Angeles Lakers and Clippers, respectively. We have also seen them lose by four to the Knicks, Magic, and Wizards over the past handful of days. Sure, there is injury trouble to consider, but what that tells me is the only team consistently beating the Bulls is itself. I don’t think it’s necessarily wrong to connect inconsistency and youth. Those two can often go hand-in-hand, and the Bulls sure do rely on a youthful unit. At the same time, there has to be a point where we look past this excuse and ask ourselves, “what if this roster just doesn’t work?” We have seen many of these young players for several seasons now, and as wonky as staying healthy has been, it’s hard to say we have seen anything that indicates these current Bulls can be anything more than painfully mediocre. There is only so much time this organization can put into making the same players work. Square block through the round hole and yadda yadda. They have changed the infrastructure and the on-court narrative still feels all-too-familiar. What more can you do? Fortunately, I think the front office will ask themselves that question over the course of this season, and there is a good chance the only answer they reach is to shake-up the talent.

•   Daniel Gafford has spiraled in his recent stint as the Bulls starting big man. Last night he did finish with 10 points and 2 blocks, but he was also forced to the bench with over 9 minutes to go in the third quarter after picking up his 5th foul of the game. He has been able to stay on the court for only about 12 minutes per game over this recent stretch, and while he delivers his highlight reel plays here and there, it’s clear that he doesn’t have the craftiness and defensive chops to give the Bulls what they need on both ends of the court. Head coach Billy Donovan said that the Wizards’ size hurt them last night, and I’m just not quite sure when that will not be the case with both starting frontcourt players on the injury report. The Bulls are likely going to be outsized and outmatched in the strong majority of games moving forward, especially the rest of this week with Zion Williams and Steven Adams, along with Serge Ibaka, on the calendar. The Bulls are not going to throw Thaddeus Young at the five to start games, at least not with Donovan keen on watching the veterans’ minutes carefully. The only other option would be Cristiano Felicio or Luke Kornet, and I think we all know that’s not going to happen. So … time to learn on the fly, Gaff.

•   Did Zach LaVine get fouled on the last play? He seems to think so …

Zach LaVine on final drive: “I thought I drove and created contact. The refs saw it differently. I guess I gotta make the layup.”

•   I’m indifferent. I could see a case made for Len sticking out his leg on that final drive, but I also think that was a clear enough lane where a talented scorer like LaVine should have been able to finish. You can tell he jumped in the air expecting to draw contact and the foul. I understand the decision, but he probably needs to recognize that making the layup is a priority in that situation.

•   Whatever. He still had 35 points and continued to show the Bulls front office why he is a clear building block. But don’t take my word for it, take Bradley Beal’s …

•   FWIW: SNY’s Ian Begley joined ESPN’s Zach Lowe to talk about the Knicks on the latest episode of The Lowe Post podcast. He, once again, referenced LaVine as a player New York and other teams have their eye on. At this rate, it seems highly unlikely that any move happens, but it’s just a quick reminder that it appears other teams would be very happy if the Bulls did decide to make him available.

So the Knicks Are Reportedly Still Thirsty for Some Zach LaVinehttps://t.co/jjbtkXqlRX

Want to see what a Bulls practice is like?

Watch our Open Practice tomorrow at 4 pm CT on Twitter, YouTube, and https://t.co/rFOXT3cUdR with Mic'd Up coaches and more!@AmericanExpress | #BullsNation pic.twitter.com/cf03lrPvE9